Yesterday I managed to defy gravity and take an hour long flight in an SDZ Junior glider over the green fields of Wiltshire in the UK. Two hours later I was crossing the start line of a 100km glider race somewhere in Slovenia. How did I manage it? Well the first hurl into the bright, shining blue was for real; I am an avid glider pilot in my spare time and have spent most of my summer relearning the graceful art of soaring after a break of five years or so. The second was with the aid of Condor, a new gliding simulator from Uros Bergant and Gregor Rozman discreetly released to native Slovenian gliding and simulator fans. 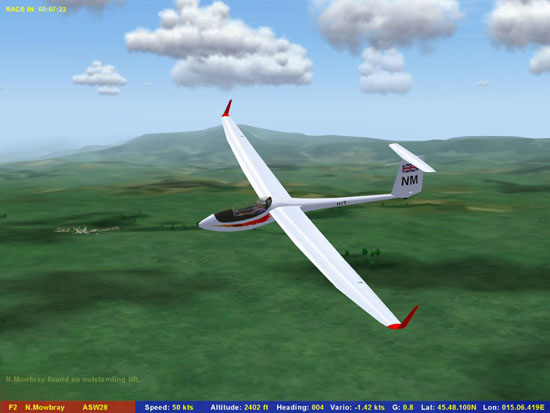 I am hoping with this review to give an insight into the workings of Condor and what you can and cannot expect from it. I have chosen to concentrate on features and requirements rather than indulging in all the available options for fine tuning the sim as I trust many would rather read the bit about “how it flies” than “how do you get the reflections turned off?”

What Does It Do?

Well the sim provides the user with the ability to fly in a series of high performance glider types over the mountainous terrain of Slovenia with the key aim of reproducing the conditions and experience of competition soaring.

What It Doesn’t Do

It is certainly a detailed sim with a specific aim in mind. It does not simulate the learning aspect of club flying, although there is plenty of scope to do just that with a little knowledge of the discipline. Therefore you will find no training aircraft here. It is definitely aimed at those of you who may already have some real soaring time and may want to enhance your skills in the cockpit.

What Do You Get?

A detailed sim, no doubt about that. A number of gliders are available including: the ASW27, ASW28, Discus 2, Ventus 2, LS6, LS8, Nimbus 4 and ASW22. Also, as a bonus, you get the MDM-1 Fox, an aerobatics type, so you can hurl around the skies and generally just enjoy pushing the envelope.

For those of you unfamiliar with Glider types, these are all high performance soarers (except the Fox) with either an 18 meter wingspan or greater “open” Class wings. 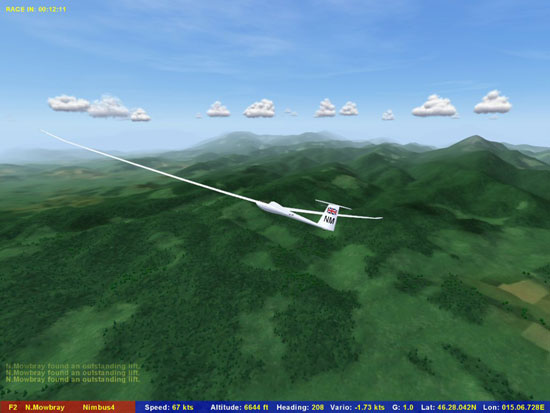 As yet there are none of the training types that are common to European gliding clubs, namely the ASK13 or ASK21 or single seaters of less performance. Plans are afoot to correct the fleet but more on that later.

The terrain is a non-specific area of Slovenia with a mountainous aspect. I cannot comment on the authenticity of the terrain as I am unfamiliar with the region, however, the vista is most pleasant and done to 90m resolution. This is inline with the likes of FS2004 but they seem to have carried it off with a little more finesse as you can see. The mountains and valleys are delightful to behold; trees abound giving an excellent wooded effect. Though they may not bear up to close scrutiny, they are individually rendered and, well, they just work. Roads are not a main feature as the specific navigation required in the races the sim deals with is handled by an on board PDA/GPS mounted in the cockpit. The club area at the various airfields is Spartan but effective with cars and glider trailers dotted around to give an inhabited effect. 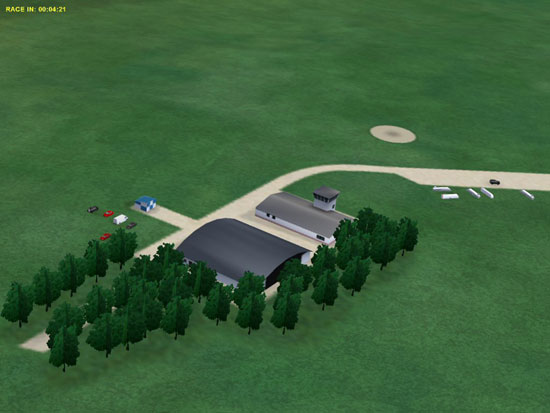 The aircraft, both power and glider, are simple but effective external models that are well dressed with an ability to add custom skins and change ID numbers and letters. I will let the pictures speak for themselves.