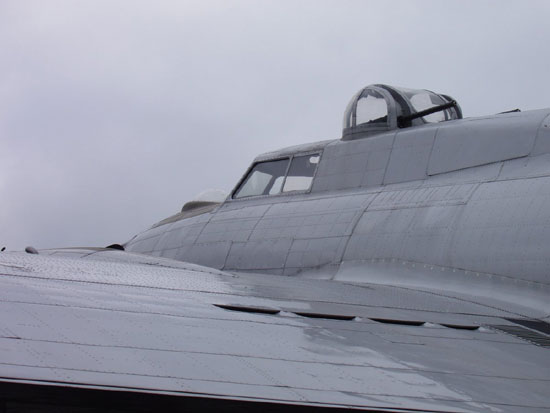 On the Flight Line

The 12th dawned gray and moist. Thick cloud cover greeted us as we pulled out of the driveway on the way to the airport. I knew it was just low clouds and would likely lift, but it was heavier than usual and it had the potential to ground us if it didn’t improve a good bit. We pulled in to the parking lot and walked over to where the aircraft was parked. Ray was running a bit late so we would spend the next hour or so killing time and thinking about the upcoming adventure. I lingered around the aircraft for a while. I tried to imagine what it was like, being a young man, off in a foreign land, about to climb into an aircraft that might just not make it back today. Knowing the horror of watching friends and buddies go down in flak riddled aircraft, never to be seen or heard from again. Knowing of the cold and loneliness of high altitude flight. Knowing that every time you go up it could be your turn. Your turn to not come home. 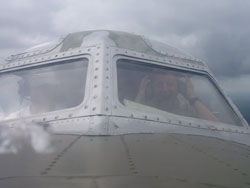 Your turn to be hit by flak, or shredded by the angry guns of an ME-109, or the cannons of a Focke Wulfe. I got goose bumps walking around that aircraft. Every time I touched it’s skin I was reminded about the job that it did. I was reminded about the many fine young men who climbed inside to do a thankless job. I became keenly aware of the fragility of men in war. I know many did not come back from these missions. Every time I see a veteran of any war now, I personally thank them for what they did. I think I get it, so many of my generation don’t and that is a shame.

I recalled the time I was saying good-bye to some passengers getting off a flight I flew from Atlanta down to Sarasota FL. As the last few folks got off, one older gentleman had a cap on. It had a B-24 logo on it and his squadron, which I don’t recall. We stepped out into the jet way and had an animated discussion about B-24’s and aircraft in general. They had come to Florida for a reunion of the members of his squadron of which he was a pilot. After a few minutes his wife, who was traveling with him, got a bit impatient and gently persuaded him to come along. I gripped his hand and said thank you for what you did back then; I have nothing but respect and awe for what you and many others did in that Great War. I looked him right in the eye when I said that, he started to cry. I guess I did too, but we composed ourselves fairly quickly and he went on his way. I don’t think many people alive today truly know what was sacrificed by so many.

My father instilled in me a healthy interest in history so I know and have read many stories about the B-17. This along with my addiction to aircraft and aviation lent familiarity to the aircraft that stood so proudly before me. Its ruggedness is legendary and it becomes uniquely evident when you get close to one. The huge wing and tires, the large control surfaces, and the jaunty stance jump out at you. It exudes simplicity and function. A pure bomb truck, able to be simply operated and maintained, but at the same time, beautiful in its functional and simple design. It was also designed to be built in vast numbers in a very short period of time. I had about a half hour to just sit and enjoy the sight, touch, and smell of her and I drank it in.