The airline business is a funny industry. Over the decades commercial aviation across the world has seen many new ideas, technologies, and business models among other things. The underlying premise has always been, of course, to provide safe, economical air travel for the flying public. Air travel used to be a luxurious affair with passengers dressing up in their finest clothes to be whisked away to exotic locations in a customer service heavy atmosphere. The evolution of the airline business, however, has resulted in low fare, no-frills flying that is accessible to everyone. The expectation is that flying is no longer a privilege but an inalienable right. Indeed, rarely is air travel accompanied by excitement of the novelty of flight or anticipation about the destination, but rather with an overwhelming sense of dread. Long lines, strict security, a ticketing and check-in process that has not evolved in 40 years, lack-luster customer service, all combine to make air travel a somewhat stressful affair.

After deregulation of the airlines in 1978 the floodgates were thrown wide open for new entries into the commercial airline market. Competition increased drastically and new business models were suddenly needed to deal with the changing market. One of the major new concepts adopted by most airlines was that of the “hub and spoke” system of air travel. Simply put, airlines developed large “hub” airports at strategic places across the country that would serve as the backbone of their air travel system. Through these large hub airports service to smaller communities would branch out on shorter routes, typically using smaller aircraft. The system was a departure from the historical point-to-point service offered prior to deregulation but allowed airlines to serve more destinations, giving more choice to the flying public, all at a lower cost to both the airline and the customer.

With the advent of the hub and spoke route structure there was an explosion of demand for smaller “regional” aircraft capable of carrying anywhere from 15 to 50 people. These short-haul aircraft typically flew legs of 90 minutes or less and were usually crewed by pilots looking to gain flight time and experience in anticipation of being hired by the “mainline airlines”. Intricate labor contracts between the pilots and the airlines contained “scope clauses” that prevented these smaller regional airlines from infringing on the mainline routes flown by the major airlines by limiting equipment that regional airlines were allowed to operate.

Fast forward to the new millennium. For reasons that could fill a dissertation thesis the regional airlines have evolved into a much more significant market force. Though still bound by union limitations the past decade has seen a leveling of the playing field, with larger regional airlines flying bigger, more modern equipment longer and longer distances. For some pilots the regional airlines are now the pinnacle of their career instead of a training ground for the major airlines. Additionally, there has been a shift in the public demands on these modern regional airlines. The flying public no longer wants to fly around in small, noisy turboprop aircraft that they perceive as “bug smashers”. They want the smooth, quiet performance and implied safety that a jet aircraft offers.

This brings us to this comparison article. Just how do these new regional turbojets compare with regional turboprops? Are they more capable? More comfortable? Easier to fly? Cheaper to operate and maintain? We will look at two offerings from the Flight Simulator 2004 add-on community: the feelThere PIC ERJ-145LR and the Flight1 ATR-72-500.

The ERJ-145LR is a product of the Brazilian company Embraer. The ERJ-145 was the jet evolution of the popular and successful EMB-120 Brasilia turboprop. The ERJ-145 first flew in August of 1995 and the design continues to evolve including long range, extra-long range, and even military derivatives of the original design. The aircraft seats 50 passengers and has a range that far exceeds the typical route structure of the hub and spoke system. 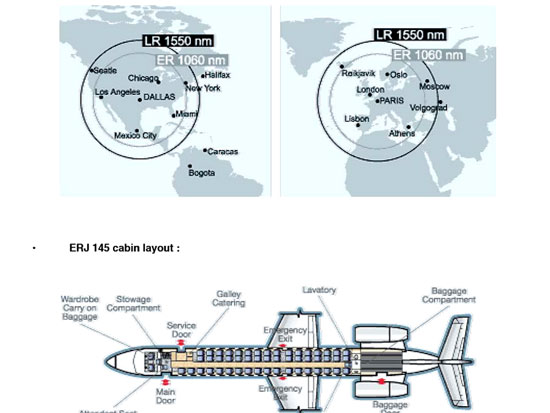 The feelThere PIC ERJ-145LR is available by direct download from the feelThere web site. Documentation is available for free on the web site in case you would prefer to browse the material prior to purchase. The documentation consists of 13 PDF files that cover individual systems and also includes items such as a Quick Start guide and a Quick Reference Handbook. The documentation is well written, although I would have preferred that they bundle all of the individual systems PDFs into a single continuous document. Most of the systems PDFs are only 3 to 10 pages long and cover sim specific details of system operation. The manuals are not exhaustive in their coverage in that they don’t offer non-sim related schematics and details.

Checklists are included but curiously the performance tables are pretty sparse. The diagrams and graphics within the documents are well labeled and clear providing an easy reference for the onscreen action. The fact that each system is a separate PDF file is a bit tedious however, since you have to either accept that you might have to have 5 or 6 separate PDF files open in the background or open and close each one individually as you need them. An all-in-one manual would have been much better. (If you print your manuals this won’t be an issue.)

Jet or Turboprop? Part I Page 10

Jet or Turboprop? Part I Page 2