I can’t even begin to posit definitive answers for many of the questions. I can certainly give you my opinion however. I’m fortunate in that I am regularly a passenger on the airlines since I fly for free, so I’m able to look at things from both a pilot and passenger’s perspective. From a passenger standpoint, I’d have to say that speed, low noise levels, and smoothness play a large part in how happy I am as a traveler. Having flown in 1900Ds and Dash-8s quite frequently, I can definitely say that I prefer riding in a CRJ or ERJ as a passenger. I’ve not flown in an ATR or Dornier 328, so perhaps my preference can be swayed by one of those aircraft.

On the basis of cost, turboprops are definitely cheaper to operate which brings up an interesting point. We all know that the airline business has historically been a business of relatively slim margins. With fuel costs rising and payments due on shiny new regional jets, there is a point where ticket pricing becomes a critical factor in an airlines success or failure. The flying public, in recent decades, have come to expect bargain travel. The question is whether they would spend less to travel on a turboprop or more to travel on a regional jet? The verdict is still out on that question and as fuel prices fluctuate toward the high side we will continue to see airlines look at alternatives to cut costs. I know of several regional carriers that now regularly taxi on a single-engine. The fuel cost savings are reportedly in the hundreds of thousands of dollars per year. Adding winglets, direct routing, flying higher and using idle power steep descents are also being explored by airlines as ways to save fuel.

As for the feelThere ERJ and the Flight1 ATR, they have provided me with an interesting comparison between the two different types of aircraft. Both are outstanding products with a very high fun and learning factor. Add in the real world environment provided by FS2Crew and my plate was pretty full for the past several weeks. I make no claim that I learned every single function and system on either aircraft, or that I recognized every bug that might be present, but overall they both did a fine job of representing the aircraft they mimic.

Both aircraft shipped with documentation, but clearly the Flight1 ATR manual is superior. With good indexing of information, thorough explanation of aircraft systems and useful performance charts, the ATR manual is very well put together. The feelThere ERJ does itself a disservice by not pulling together all of the multiple PDF files into a single source and expanding on the systems descriptions. The FMC is far more capable than the feelThere manual indicates. The lack of proper performance charts is unusual since the people that buy these add-ons are the type of people that would consult such charts.

For both the ATR and ERJ the user communities have stepped up with outstanding tutorials, external load and performance programs, and user repaints. The ERJ in particular benefits from user repaints since the only scheme that ships with the product is a feelThere Christmas paint scheme that is “unique”. There are many repaints available though, so there is no reason you can’t find a paint job that will suit your tastes. (The ERJ factory paint scheme and Força Aérea Basileira by Olivier Gérardin) 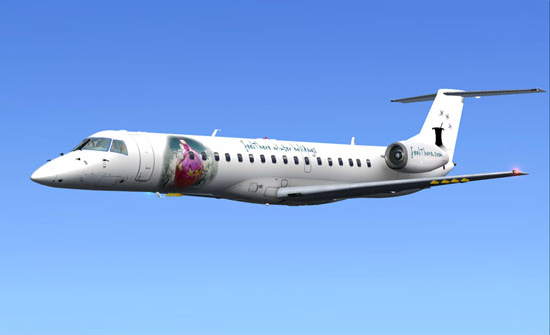 Jet or Turboprop? Part I

Jet or Turboprop? Part I Page 2

Jet or Turboprop? Part I Page 3

Jet or Turboprop? Part I Page 7