The real Pe-2 had challenging flight characteristics due to the fast wing. This made it difficult and prone to stalling at low speeds and high angles of attack, causing several fatalities in landing accidents.

The Pe-2 we have performs as expected. Landings are best carried out fast and with plenty of flaps. Maximum sea level speed is around 440 km/h with 50% fuel and no bomb load. Again, this is right on the numbers (the maximum speed of the real Pe-2 of 452 km/h was only attained with wooden guns, the hatches smoothed over etc.)

The real Pe-2 had electrical motors in the tail to assist with pull up after dive-bombing. Our Pe-2 pulls up nicely at high speeds (and this might be a way to shake a human-flown Messerschmitt, especially if you can pull up into cloud while his elevators stiffen). The Pe-2 did not, however, have assisted aileron controls, which means they stiffen considerably at high speed. It is worth slowing down a touch before rolling over into the dive.

Given the wing profile and the low AoA tolerance, it is best not to engage in a turning fight at all. The inside wing will stall easily and spin you in. This is an aircraft that needs to stay fast. The best defense against an agile fighter is scissors/corkscrew at medium speed (about 330 km/h) and relying on defensive fire. The Messerschmitt with its limited ammunition and narrow cone of fire can struggle to get a good shot in. The Fw-190 will have no such problems.

The Pe-2’s wings were packed with fuel and serious damage here will cause a catastrophic fire. The real Pe-2 had an inert gas system and so low damage will not result in a fire. German 7.92mm hits stop leaking after 30 seconds and 20mm hits after some 2 minutes. That means you can get back to base with some damage, pretty important for a plane that may be carrying out raids deep in enemy territory.

The DM is given to shedding parts — a rudder here, an engine there. This happens quite a bit but makes for more interesting missions and landings. One handy side effect is that if you crash-land with an engine on fire, you have a good chance of losing it as you scrape along the ground, which is always good to know. 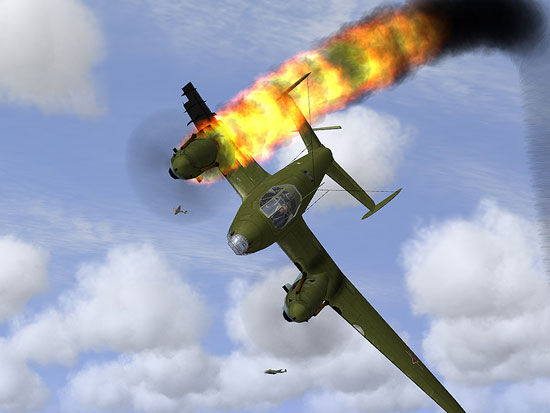 Assuming an enemy pilot who heads home once sustaining engine damage, the Pe-2 has perhaps a 30-40% chance of surviving an attack by an early Messerschmitt, perhaps 10% vs. a late Messerschmitt with a 30mm cannon and no chance at all vs. a Focke-Wulf 190, where you probably will not even get a chance to bail. This may make it unattractive for some online pilots, although the figures are probably realistic. With an escort, pilots will of course have a decent chance and the best idea is to approach so high that you are not attacked at all. Nevertheless, I would personally feel happier in an IL-2.

Given that we are dealing with a single new plane type (albeit in six variants) it is a pity that no space was found for proper pilot notes, such as supercharger gear change altitudes, mix altitudes etc. These would have been particularly useful as the wrong settings can cut 40 km/h off your speed at sea level. A guide to dive bombing in the Pe-2, supernumerary for most virtual pilots, would perhaps also have helped the newer pilot, especially a reminder to reset the engines for low altitude before diving. In addition, a couple of tiny errors, not present in the Russian version, crept into the Western readme. A release focussing on a single basic airframe and introducing new cockpit elements should really have had a potted history of the type, some pilot’s notes, cockpit guides etc., perhaps presented as a 1940’s document. A thin .txt file does little to round out the package or engage interest in what, for most, will be an unfamiliar aircraft.