The Now-Declassified Story of the Easter 2006
Iran Reconnaissance Overflight

It’s Spring, 2006. It’s been three years since the United States and its coalition allies removed the Saddam Hussein regime from power in Iraq. But Iraq seems as far from peace as it can be; worse, some critics maintain, than it was under Saddam. And one of the reasons is Iran.

The Islamic fundamentalists who have governed Iran under strict Shia doctrine since the fall of the Shah in the 1970s see an opportunity in Iraq’s post-Saddam turmoil to achieve covertly what they could not in open warfare — to foster a government sympathetic to, or better yet closely allied with, the Islamic republic of Iran. They have funneled weapons, money and men across the countries’ common border to battle the US and the fledgling Iraqi government. And they have bluntly warned the West: We have nuclear weapons, and we will not hesitate to use them.

On Tuesday, April 11, Iranian President Mahmoud Ahmadinejad announces in a press conference that his country has succeeded for the first time in its quest to achieve domestic large-scale enrichment of uranium. This prompts US Secretary of State Condoleeza Rice to declare the next day that it was time for action on Iran: “This is not a question of Iran’s right to civil nuclear power… This is a question of,… the world does not believe that Iran should have the capability and the technology that could lead to a nuclear weapon.”

But experts are split over the question of whether Iran really does possess that technology. More, and more timely data is needed. The military intelligence services are doing all they can to collect the critical snippets of information that will allow analysts to determine the answer. Every possible channel of collection is being examined, including some that are decidedly unconventional, and one that the general public and aerospace experts alike are certain couldn’t possibly exist.

In the intervening twenty years, all that was heard were pieces of a rumor, but never the whole story: Some kind of space-based weapon… Vanished into thin air… A sound like the sky tearing in half… Meteors don’t turn! Well, this one did!

Even after the existence of the F-136 was acknowledged in 2014, many in the aerospace community had the persistent feeling that there was still a story out there, waiting patiently to be told. Finally, it can be.

By combining recently declassified documents with contemporary media accounts and Internet postings, a picture began to emerge. But what finally brought the story into focus was an interview with the man who flew the mission, USAF Brigadier General Horace Killmore (ret). I visited General Killmore at his home in Cody, Wyoming. The dozens of framed pictures along one downstairs hallway could easily be a museum exhibit recounting the early days of the Second Space Age.

Development of what was to become the F-136 Orbital Defense Interceptor began in the fall of 1998 under the program codeword Senior Matte. The specification issued by USAF HQ called for an aerospace plane that seemed every bit as impossible to build at the time as had the original A-12 Blackbird back in the mid-50s: An ultra-high speed, low observable, single-stage-to-orbit spacecraft, with a primary mission being the interception and destruction of opposition satellites, weapons and vehicles on or near low Earth orbit. Secondary missions were to include transport of cargo or personnel to and from orbiting spacecraft, delivery of guided weapons in the 2000-lb. weight class anywhere in the world in less than 120 minutes, and overhead photographic or electronic reconnaissance at altitudes between about 100K feet and low Earth orbit.

Lockheed/Martin was selected as the prime contractor in spring 2000, primarily due to their experience with previous “black” reconnaissance aircraft and the covert F-117 and Blackstar programs. While Lockheed retained propulsion, system integration and overall program responsibility, Boeing’s Phantom Works was chosen as the lead subcontractor for the spaceframe, and aerodynamic development began under the codeword Have Garnet. It would be fourteen more years, and the accumulation of numerous aerospace “firsts” by the Have Garnet program, before the existence of the F-136 was revealed to the public. 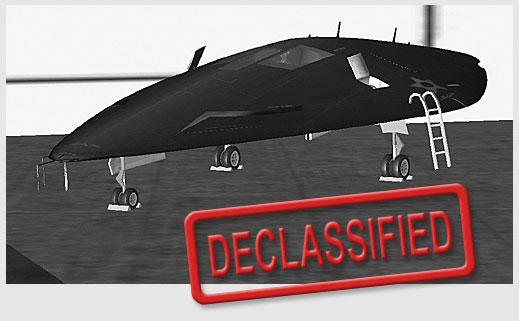 DECLASSIFIED: The F-136B in the hangar.

But the vehicle that now hangs in the USAF Museum, YF-136 03-0714, is a very different one from today’s operational orbital fighters. It was, in fact, little more than a proof-of-concept platform. “It had the hull and aerodynamics, but none of the spacegoing equipment,”recalled Killmore. “Since we didn’t have the spacecraft’s reaction control system, our effective ceiling had to be limited to about 95,000 feet. Above that altitude there weren’t enough air molecules for the control surfaces to be effective. The production engines were years away from being ready, so we had installed two highly modified GE F-414s, similar to those in the F/A-18E, delivering about 25K pounds of thrust dry, but with an afterburner/scramjet carried over from the Blackstar program. The flight control computer was modified from the one used in the F-117, and avionics and environmental systems were right out of the U-2S.”

This wedding of bleeding-edge aerodynamics and propulsion with off-the-shelf equipment led to some interesting control compromises for the pilot. “We knew anytime we operated at high Mach it had to be on autopilot. Things happened too fast in cruise for a mere human hand-flying to deal with them quickly and smoothly enough. That had been proven back in the beginning A-12 days. But the early afterburner/scramjets we had in the Y model weren’t throttleable. They were simply on-or-off. If left on, they could easily accelerate the ship past the Mach 4.25 limit we’d set — again, for aerodynamic reasons. But without them, speed would decay over a few minutes to the low Mach 2 range, at which point the ship would begin to mush and lose altitude. The only solution was to monitor speed closely and cycle the scramjets on or off to keep the vehicle within a narrow range between 3.75 and 4.25 Mach. Try as we might, we could not program the off-the-shelf autopilot to perform that function properly, and it would be years before we got one that behaved. So on top of managing and monitoring a craft moving three times as fast as a rifle bullet, I also had to turn the burners on and off manually to keep the speed in check.” Killmore grinned. “Big fun.”

This configuration was never intended for flight beyond the atmosphere. But the availability of an aerodynamically-conforming in-atmosphere test vehicle would shorten the development program by years. And it would allow for some interesting “demonstrations.”

The Fastest Thing on Earth Page 2

The Fastest Thing on Earth Page 3

The Fastest Thing on Earth Page 4

The Fastest Thing on Earth Page 5

The Fastest Thing on Earth Page 6