Again, you’ll recognize the sounds from previous iterations of the Strike Fighters engine. No surprises here, however, if you download and install the latest Weapons Pack from Bunyap’s fine little shop of destruction, it changes a few key sounds like the afterburner and your cannon fire. The afterburner will shake pictures on the wall and the bass note and treble crash from exploding aircraft are still as awesome now as they were when the first release hit the shelves. The deep thump sounds of bombs hitting the target still shake your Chinese-made office chair and add to that sensation of: “I really just pounded the crap out of something, didn’t I?”

One little problem here, too. We really need some British voice acting done for the RAF aircraft. Most of the ATC staff in Germany probably would have been American, but it feels really weird to fly along in your Harrier and not hear the King’s English from you or your wingmen.

As you may know if you read my TrackIR 4 Pro Review, I am utterly, hopelessly, addicted to this little gizmo.  It’s great in auto racing, but even more so in flight sims. I never been very good at padlocking air targets and I’m pretty fumble-fingered with a view hat, so TrackIR is a natural for me. I think it adds to the immersion factor as well:  a bandit goes by your left side, you turn your head as he passes and keep sight. Very cool.

Understandably, it didn’t take much prodding to get me to fly WOE and offer a few thoughts on the use of TrackIR in this sim.

First, the “bad news”: WOE, like it’s sister sims, does not offer enhanced support for this device. Meaning no 6 Degrees of Freedom, no zoom in or out, no looking over the aircraft’s nose or around the side of the stick. Just the basics here, two axis motion, up & down, right & left.

And that isn’t really all that bad. It’s not bells & whistles, but it is very functional, especially in a dogfight. I’ve mapped the view zoom in and out functions to a button on my CH Fighterstick and it works just fine.

So although we can always wish for more, TrackIR and WOE go really well together. Highly recommended viewing.

Unfortunately, PFunk’s current Internet connection has some pretty bad latency problems, ruling out his ability to get online and fly some friendly co-op or go head-to-head in dogfight mode. Fortunately, we had a Plan B:  guod and I have pretty solid connections and so we agreed to get online and give WOE’s multiplayer some air time.

The route to multiplayer goodness for Strike Fighters and Wings Over Vietnam has run using Hyperfighter.sk. New in Wings Over Europe is an internal TCP/IP hosting connection, so we elected to try out this new TCP/IP hosting route to see how it works. 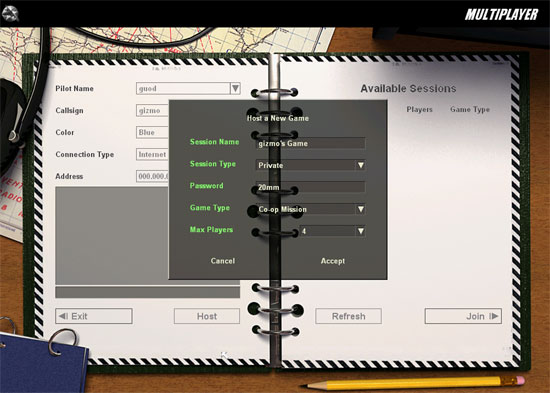 The multiplayer interface has been nicely updated. Click for enlarged image. 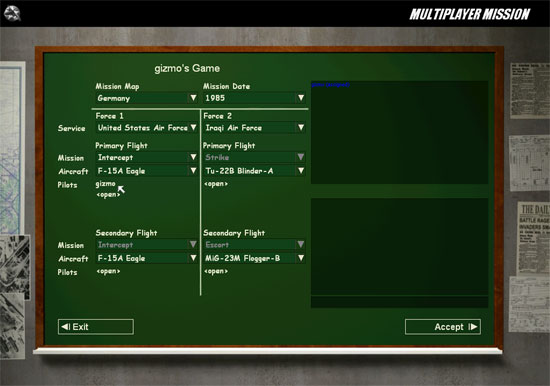 Despite some initial fits and starts involving my not having the “07.10.06” patch, or the “Hot Fix”, and then getting the  “cannot find d3dx9_2*.dll” error message because we didn’t have the latest version of DirectX, we were nearly ready to fly. guod was the session host and I was the hostee (don’t even think “hostess”). You can find the latest downloads for Wings Over Europe here at Third Wire.

Couple of notes to pass along. You may have DirectX 9.0C, but do you have the latest version of DirectX 9.0C? Yes, DX9.0C has changed but retains the same version number. No, we don’t know why Microsoft did that either. Download and install the latest update here.

WOE’s multiplayer is what I would call pretty basic. You can choose various mission types, such as Strike, Intercept, Escort, etc. play co-op or dogfight, pick your aircraft, your primary and secondary flights and then you’re airborne. What you cannot do is refine much of the details of your mission, say what the targets will be, where they are, what the air defenses will be, and so on. So you won’t be creating or saving any co-op missions and you can’t go download any, because they don’t exist for online multiplay.

Sounds like more “bad news’, but once you get into the action, all is forgotten. guod and I flew a strike mission against a runway target (I blasted it and took off half my Hog’s left wing), flew another against an oil tank farm, and mixed it up with some aerial foes. Frame rates were very smooth, no lags and no drop-outs.

We then decided to try out the head-to-head part and did some dogfights with the F-15A. Again, we had no problems with the connection or the sim whatsoever, and it was a lot of fun!

The results are classified, intel is going over the HUD tapes as we speak. What I can tell you is one of us was going “Where’d he go? Where’d who go? a lot. Man, I hate the sound of 20mm cannon puncturing my fragile aircraft body. [Tom, you’re being nice. The first two kills were all yours.]

To sum up, multiplayer in WOE is basic and although we wish it were more robust, I can also tell you that it’s fun. And that fits right in with the whole concept of WOE — fun.