Microsoft debuted a new video for us during my visit to Redmond.

It’s been linked over at AVSIM and a few other places. I’m not positive, but I think SimHQ is the first place to have it in a higher resolution. The ACES Studios team had only completed this the night before we arrived.

I have to say it’s a fun video to watch and it has some good looks at some of the added detail which is going to ship on the two DVD’s which hold all the data for this new version. Two DVD’s, something in the neighborhood of 13-14 Gigs for a full install! Has to be some kind of record I think for a flight sim.

This video shows the possibilities for Microsoft’s vision of “Shared Skies”. With Shared Skies, Microsoft makes the leap from what could be considered a niche ATC environment to massively multiplayer online gaming (MMOG). It’s meant to draw in more folks with an easier interface that works better than what’s available now. 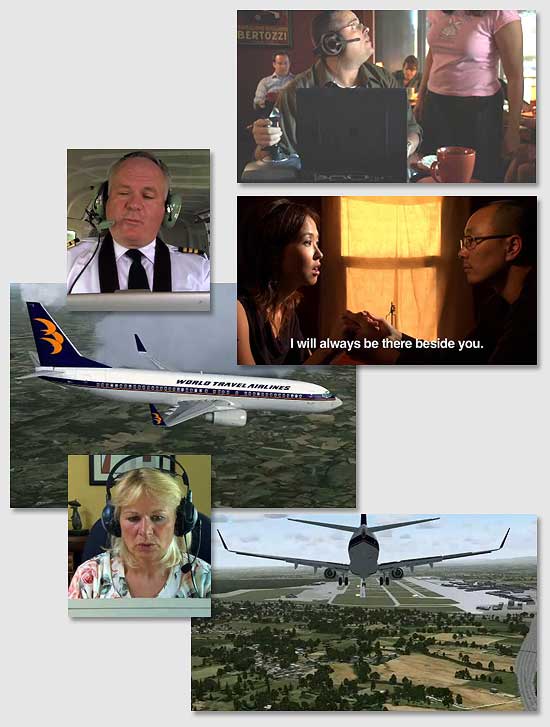 For the first time, you’ll be able to multi-crew an individual aircraft. You will be able to take on the role of copilot or instructor with someone else around the globe, in the same aircraft. Using voice over IP (VOIP), you will be able to chat with other players and also interact with anyone who chooses to play online as a tower or center controller. Currently you can do this with the latest version of the sim, but the outlets available for this require some fairly big investments in time and training along with actual certification. Those familiar with this will welcome the ease of use and the tools Microsoft is providing for those who want to take advantage of the experience. A full blown control tower simulation with appropriate tools will ship with the deluxe version. It includes a tower cab view with ATC type approach radar, communications tools, and traffic management aids. I really think this will add a lot to the game and I’m looking forward to flying with it. I think it’s a great way for folks to get a very realistic ATC experience that currently is lacking in the sim. Don’t get me wrong, ATC does work, but it’s quirky and at times not very realistic. This new version has the potential to rival the real world as far as ATC goes. You will be able to play as the tower controller anywhere there is a tower controlled airport in the sim.

One other addition I’d like to point out, which I left out of my main write up concerns a never before seen feature of Flight Simulator. For a long time FS has included a sailplane as part of the sim. This version is no exception, but a nice addition is going to come with this latest modern competition aircraft. Finally, the ability to be towed aloft will be included. A tow plane with towline and realistic flight dynamics will be included. While I didn’t get a chance to fly it hands on, it is there, and it looks to be well done. I can imagine having some nice little field in the Alps, with a bunch of folks online searching for thermals and a busy tow plane or two dragging everyone aloft as much as they like. I think the developers have been wanting this feature for the last two versions, and they are proud they have finally given it to us.

Enjoy the video, it’s meant to be funny, but at the same time showcase what Microsoft hopes will be another hook to get new simmer’s interested in our hobby. I think you’ll enjoy this. Also remember this video was made with a beta build of the software, so what you see is not quite what you’ll get with the shipped version.

Dashboards and Ailerons and Tail Wings, Oh My! Page 3
FSX Update – A Visit to ACES Studios