Those of us that are old enough remember plying the virtual skies way back in the early 80s with Microsoft Flight Simulator (MSFS). My personal starting point was in 1985 with MSFS 2.0. Sporting wire frame graphics and a handful of colors FS2.0 relied heavily on one’s imagination to supplement the experience. Fast-forward 20 years and here we are, still doing the same thing, but times sure have changed. Flight Simulator 10 (FSX) was recently released to the foaming-mouthed masses after an interesting demo/beta introduction. It was a foregone conclusion that I would purchase it, regardless of any comments I had read about it or my experiences with the demo. I finally managed to track down a copy of FSX Deluxe edition locally, buried on the shelf of a local retailer behind multiple versions of FSX Standard. I felt like the veritable kid in the candy store waiting in the checkout line.

Several months ago Microsoft released a demo of FSX and the community ate it up and spat it out with what I’d gauge as overwhelming disappointment. Or did they? It’s one of those difficult things to judge; the old squeaky wheel cliché. The online community is only a small percentage of overall consumers (as evidenced by Lead Pursuit’s research) but we tend to be both the most advanced users and the most vocal. Overall I wasn’t impressed with the FSX demo and with the news that the full release was coming just a couple months later I was fairly skeptical about the final release results. So when I picked up FSX Deluxe and took it home, I steeled myself for worst.

Of course, I couldn’t even wait until I got home to open the box. I stopped at a fast food joint on the way home in order to fuel myself for my marathon FSX session that I knew would be on tap when I got home. Sitting in the restaurant I peeled open the wrapping and found two DVDs and two pamphlets. The first was titled “Insider Information” and consisted of about 20-some pages of general FSX information describing the features of FSX, some quick-start information, and tips & tricks for getting the most out of your first couple of hours with the software. The second item was a fold-out card that listed some of the generic simulator commands and flying tips. I knew from the weight of the box that the treasures within would be pretty slim, but the lack of a comprehensive key-card was pretty sad. 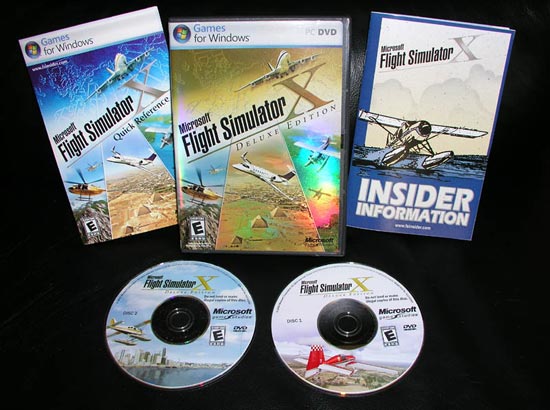