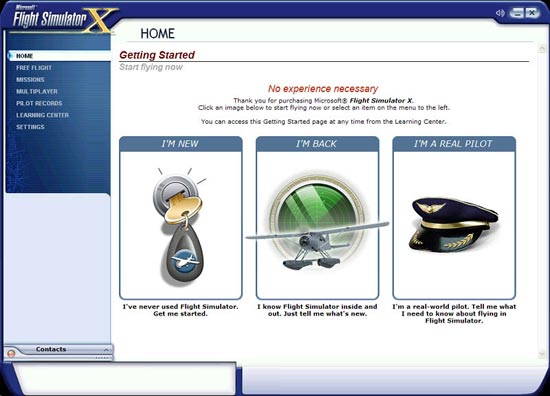 They say that first impressions are everything. If this is true, FSX makes a really poor first impression when you select one of the three opening choices. Basically what you are doing when you make one of those selections is starting the game and getting a short demo of in-game graphics and action. You get a nice speech about FSX, pertinent to the category of discussion you have selected, while an “action cam” sort of shows you scenes of cool stuff happening. Unfortunately, the frame-rates during the “preview” are terrible, some textures fail to load, and generally you start wondering what the guys at Aces (the studio that built FSX) were thinking. What would have been FAR better would have been to make an .avi or .mpg of the action and play each as a movie instead of a real-time, in-game rendered demonstration. The first impression would have been much better.

After exiting from the preview I fired up the default flight and went tooling around Friday Harbor (Friday Harbor?) and just about as quickly exited out because I didn’t want to continue to spoil my “first impression”. The selection of Friday Harbor and the Ultralight Trike is a curious one for the default flight. Not only is it an odd location and airframe, you start out in the air instead of on the ground! Talk about jumping in with both feet. In my opinion, it would have made more sense to have the default aircraft be in a Cessna 172 (recognizable and traditional), and the default airport be a more recognizable piece of pavement (without a short runway and trees blocking the approach and departure ends), and the airplane to be on the ground to allow you some time to take it all in. That’s just how *I* would have done it though; opinions on these things vary.

First let’s take a look at what FSX has to offer in the stable. FSX Deluxe features 20 different types of aircraft and helicopters. Each model has multiple paint jobs, some have different avionics outfits, and the Maule has the option of strapping skis on for winter operations. The list of aircraft is impressive in that it encompasses the very light (AirCreation Trike Ultralight) to the very heavy (Boeing 747) and also includes some very cool models that haven’t been seen before such as the Grumman Goose and Maule. The new interface to select your aircraft is nicely done with options to sort the display of aircraft in various ways. The thumbnails are a nice feature and the ability to expand the list to include all sub-variants of a particular type is smart. Most users will probably initially get their feet wet with the “Free Flight” option that allows you to select an aircraft, location, and environmental factors (time of day and weather). This will all be familiar to users of previous versions of MSFS. 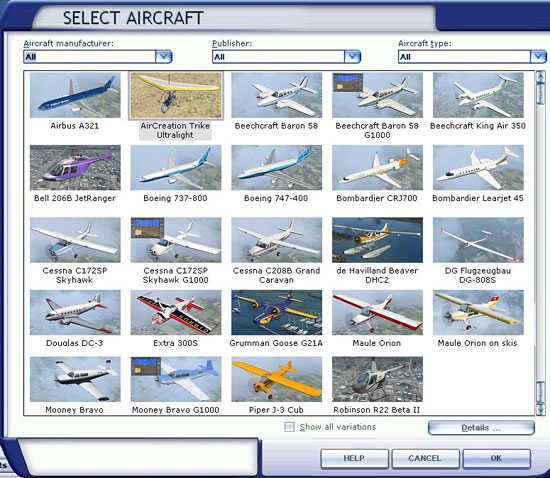