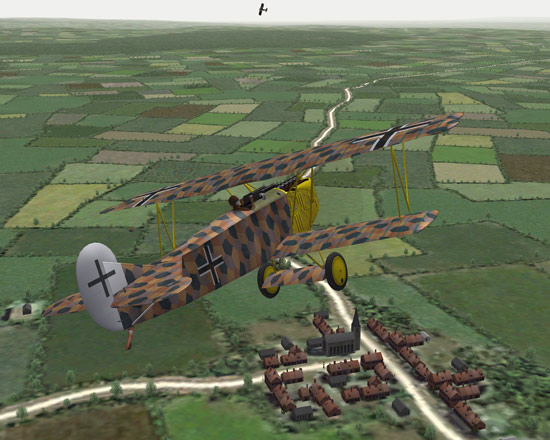 New Air Combat Flight simulation games are comparatively rare, World War One Combat Flight sims are practically non-existent. The last serious ‘Great War’ title was Red Baron 3D by Dynamix, released over eight years ago. RB3D shipped with numerous technical problems but gradually evolved into a fantastic simulation that combined good game play with decent flight dynamics, it eventually became the “gold standard” of how a WW1 flight sim should be built. It still has a dedicated following today as evidenced by the level of activity in our forums. Other notable WW I sim efforts have to include Over Flanders Fields, published last year, but OFF is really an add-on to CFS 3rather than a “new” stand-alone title. There appears to be an opportunity in the WW1 simulation market just waiting for a serious developer to jump into.

G2 Games and Tsuyoshi Kawahito (better known as “TK”), with no disrespect to the 94th Aero Squadron, have “Tossed their hat into the Ring” of First World War air combat simulation! Their new title is First Eagles: Great Air War 1918, built on Thirdwire’s Strike Fighters: Project 1 game engine. Thirdwire’s SF product line is a very popular “lite” sim series that includes Wings Over Vietnam and Wings Over Europe. Adding a title from the infancy of aviation to this list seems like a logical evolution.

The development of FE has been pretty low profile. SimHQ just recently got a look at a late BETA version. The title went gold a few days ago in Europe (available here), you can download it direct from the Third Wire site now, or if you would rather have the packaged version, GoGamer has it listed here as December 12th.

Okay, now the big question… is FE going to be a hit? Short answer: It still has a few bugs, but what I see so far looks pretty good. Anybody who has experience with any of Thirdwire titles will immediately feel at home with FE. There are only three flyable aircraft types included in the initial release, but I am confident many more aircraft will soon be added. These first three “machines” are the British Royal Aircraft Factory S.E.5a, German Fokker D.VIIF, and the French SPAD XIIIC.1.