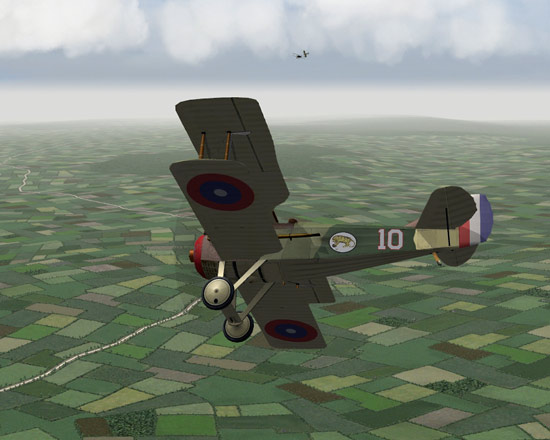 Aircraft graphics are detailed with animated parts like vibrating exhaust pipes and pilot figures. The cockpits are well detailed and appear pretty accurate. The only critique I can make of the basic aircraft / cockpit textures is they’re way too “clean” and “new” looking for a combat aircraft operating in the primitive conditions so prevalent in the first war.

Damage graphics / modeling on FE’s aircraft also seem a little too simplistic. Bullet holes look like black marks made in MS Paintbrush and attacked aircraft have a tendency to readily explode as if hit with an AA missile, rather than burn and breakup as they descend. The ground graphics are “SFP1 standard” with some detail added. They aren’t as good as FE’s aircraft textures, or the ground graphics of other recent games, but definitely adequate for low altitude operations.

Game play options are “Instant Action”, “Single Mission”, “Campaign”, and “Multiplayer”. A noticeable difference from SFP1 is a big increase in the number of aircraft involved in a single fight. An engagement quickly becomes a tight turning, crowded furball; there are aircraft everywhere! The Campaign mode in our BETA includes 2 different events, set in the last months of the war, which can be flown as a member any one of the four Air Forces involved. The difficulty level can be set, the higher the difficulty the more effect player performance has on the outcome of the campaign. Multiplayer was not operational in our copy but I fear it will be identical to SFP1… meaning it will be very limited. I hope I’m wrong because a good multiplayer mode REALLY adds a lot to the long-term enjoyment of a flight sim for many gamers… including me!