When IL-2 was released it was considered a graphical marvel. In days when visible bullet holes and moveable control surfaces were considered cutting edge, IL-2 simply looked heads and tails above the rest. Terrain was rendered in (then) unparalleled realism, aircraft actually looked like their real world counterparts, and cockpits were recreated with close detail to original cockpits.

Six years later the game isn’t the end-all, be-all of graphics fidelity but it is still pretty darned close. There are few games still out there that can recreate the immersion that the IL-2 series is capable of. Over the years the game has added graphics features and treats and these have improved the overall look and feel of the game. You have to remember that before IL-2 things like individual skins, squadron insignias, aircraft in formations with different squadron identification numbers or symbols and correct locations for markings was something you couldn’t find in most games. Finding all of this in another simulation was a long time coming.

IL-2: 1946 continues this. The game looks good on most midrange systems and looks fantastic on high end rigs. My system is no longer cutting edge, but it is still probably above average compared to the average video gaming guy and I can run the game essentially maxxed out with framerates rarely dropping below 30. That is, until I start experimenting by putting all kinds of stuff out there.

This is probably been the problem with the game over the years. Most of the IL-2 series was only limited by the number of aircraft and ground items in the game. This game is no exception. Several of the larger offline missions seemed to drive my rig into the ground. RAM is the operative word here. If you have less than 1 gig these days most of the newer games will crawl but this game will literally kill you unless you play with almost no other aircraft or ground objects. Several times the game turned into a one frame every 10 seconds slideshow while something loaded. To call this frustrating is an understatement but it is something that scenario developers have known for a while and take into consideration before creating missions. 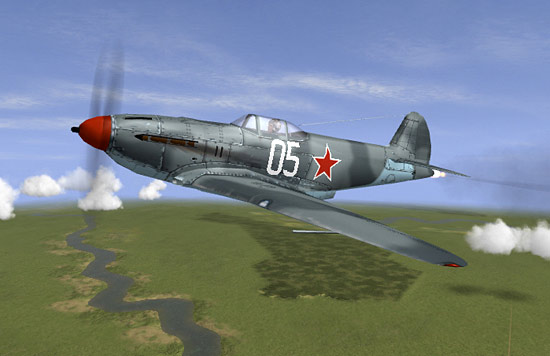 At first glance you will probably not see a whole lot of difference in the game from previous versions. The planes, ground, water all look the same. If you set up your ini file like you did for Forgotten Battles, then you will find the game looks pretty much the same. However if you tinker with the ini file, you will get a nice little graphics update that improves the immersion.

IL-2:1946 has shown improvement particularly with the clouds in the game. The old clouds are there by default and you have to switch them by directly editing your config.ini file, but the results are very nice. The clouds in the original IL-2 were no slouch, they were actually amazing back in the day but now they show marked improvement. These are early versions of what Oleg has planned for the Storm of War series which is to be first released next year. They look even more realistic and have moved away from the cotton ball look that marked clouds in earlier games.

Essentially ground textures are unchanged. I don’t really notice a difference in the ground fidelity, and that isn’t bad. The game always looked good down low, maybe a little too bright for my liking (too green, dirt looked too light brown) but overall the game certainly looked good enough down low to at least give the feeling of flying over ground. In addition the ground gives enough feeling of actually flying at speed down low. That’s something I have found very hard for flight simulations to do. Games are much better at it now, but IL-2 was among the first to actually do that for me. Even some of my favorites in the past really gave me a hard time down low.

Aircraft graphics remain crisp and essentially unchanged. That’s expected — this is more of a ‘platinum’ pack versus a totally new release and I didn’t expect any major changes in exterior or interior cockpit graphics. Aircraft are still rendered better than any other WWII simulation in my opinion, although several games are getting closer. Probably the closest competition for graphic fidelity is CFS3 and BoB2 and the game still looks better than those two, both in both interior and exterior shots. I like the color palette better in BoB2 but other than that, IL-2 still gets the nod. Not bad for basically a seven year old game engine. 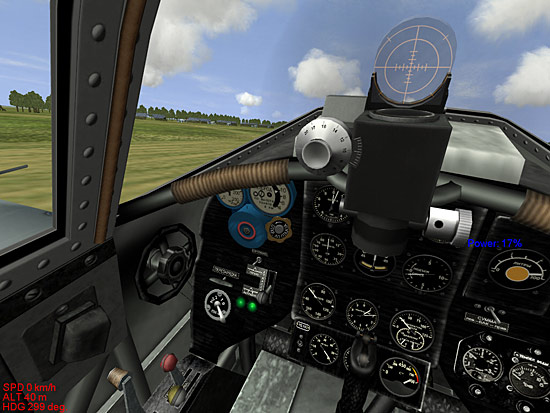 The only disappointment I could possibly register in the cockpit setup is still the lack of 6DOF range for NaturalPoint’s TrackIR3 and TrackIR4 users. I know that Oleg said that 6DOF capability wasn’t going to be implemented in the game due to technical problems with many of the cockpits, but I still wish they would have done it, graphics glitches regardless. Most of us are realists, we know a lot of the original cockpits date back to pre-TrackIR days and that makes retrofitting them to handle the new technology hard, but it would have been nice to at least let us deal with it. But that is his decision and while I don’t like it, I will deal with it. It would still be nice, especially when landing, to be able to look around in the cockpit a little.

Sound continues to be awesome. I love flying this game with my full surround system turned up and my wife away doing something else. Trust me, if you have nice sound on your system, you will hear your wife yelling to turn-it-down. The sounds are spatial of course and you almost find yourself turning your head in reflex to the speaker where the bullet thuds are coming from. The only issue of course is your computer. If you find your game starting to crawl, this might be cause. There are of course options to minimize the sounds to keep the game running well. Everything is a system compromise.

Overall the improvements to the visual and audio aspects of the game are relatively small, but do impact gameplay, especially the new cloud effects. If your system can handle it then max the thing out. The old girl still looks great. Like any classic, you can certainly find newer things that do specific things better but I still have a hard time finding a new game that overall does the graphics things this game does.