The situation is that a flight of F-105s (Dodge 35) is heading home short of gas. Cherry 08, a KC-135, is leaving his planned orbit (anchor) and is heading into North Vietnam to meet Dodge before the Thuds run out of fuel. Pack Six is the Hanoi area of North Vietnam. Bullseye is Hanoi. Our GCI (ground control intercept) radar is Red Crown – call sign for the USS Chicago, a guided missile cruiser stationed in the Gulf of Tonkin. Red Crown has picked up MiGs (Blue bandits) airborne south of Hanoi. Cricket wants Wolf to sanitize the airspace between Cherry and the F-105s. 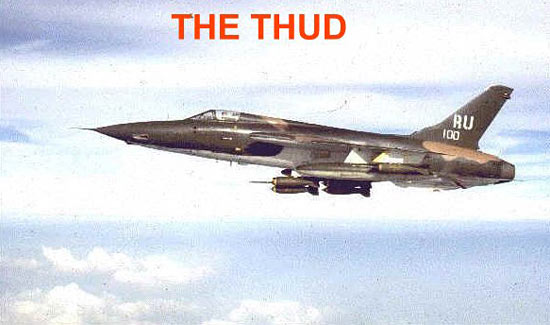 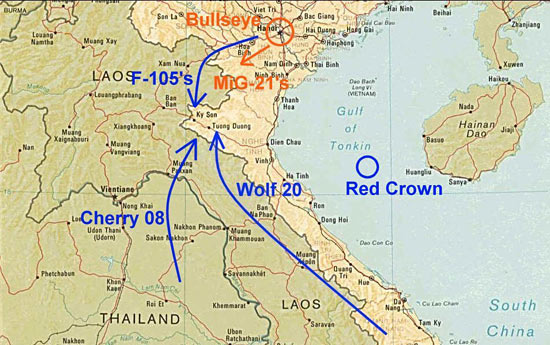 Wolf lead now radios his flight, “OK, guys, it’s time to earn our pay. Three and four, search level to high. Two search level to low. GIBs, let’s bring home the bacon.” Wolf lead has now assigned the radar search pattern for the flight and he has encouraged the F-4 backseaters (GIB- Guy In Back) to seriously get their faces in the radar scopes! Lead expects the MiGs will be in the weeds (at low altitude…typically North Vietnamese GCI would vector their fighters at low altitudes to minimize the chance that they would be detected by US radars). Because of this, lead wants the best GIB in the flight, the #2 backseater, to be looking down along with his own ‘pitter’ (pitter – a GIB…the name comes from the slang term for the F-4 rear seat – ‘the pit’).

The next call Wolf lead hears is, “Wolf 23 has a bent system.” This means that #4’s radar is unreliable. Lead acknowledges the call and then directs his backseater to raise the tilt (radar antenna elevation angle control) up a few degrees to help #3 in searching level.

Lead then calls for a fuel check. He sees that each flight member has burned all the fuel out of the external tanks. Because of the critical nature of this tasking, the lead now directs the flight to jettison their external stores. “Wolf, clean off your tanks and pickle your bombs off safe.” Wolf lead wants the bombs to be jettisoned so they will not explode…the flight is flying over an undercast and the lead thinks he may still be over friendly territory.

“Cricket, Wolf 20, what freq is Dodge on?” Cricket wants everyone on the same freq and passes that freq to Wolf. Wolf flight then checks in on the new freq where Cherry 08 is already waiting. Cricket tells Wolf that Cherry 08 is at his eleven o’clock at a range of sixty miles. “Contact there, Wolf 20.” The GIB in lead’s a/c has locked on the tanker and reads the relative closure as less than 200 knots…this indicates that the fighters are overtaking Cherry from behind and helps confirm the radar contact. Cherry 08 acknowledges the lock on his RHAW gear.

“Cricket, Wolf 20, bogey dope.” Wolf lead is asking for an update on the bandits.

Red Crown, who is also on this frequency, answers back, “Red Crown has two Blue bandits Bullseye 220 for 80, heading south and fast. They look like they are after Dodge.”