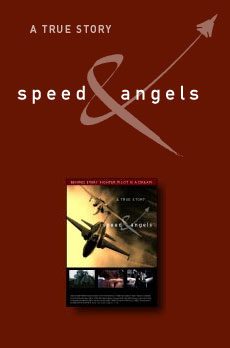 When I first heard about the Speed and Angels (S&A) DVD, I immediately knew I had to buy it. First and foremost because, like many here at SimHQ, I can never get enough of learning all I can about every aspect of military aviation. Second, because this film was produced with an amazing level of access. From training to combat the cameras were there to capture the action. Third, programs like this are few and far between, and the final reason is this will be one of the last films ever to have new footage of the F-14 Tomcat. Anyone who was a kid (and some nuts who were older) when Top Gun came out and had any proclivity towards aviation has the Tomcat indelibly etched onto their psyche. It’s gone forever so for me this was a no-brainer at $20 US. I’m writing this review for the benefit of anyone who is “on the fence” for whatever reason about whether or not this documentary is worth $20.

Ordering from the S&A web site was painless. You have the choice of using a credit card or paying through Paypal, and there are multiple shipping options available. I used the cheapest shipping cost ($4.95) and it took my DVD about a week to arrive.

Speed and Angels follows Jay and Meagan, two of the last junior officers to go through U.S. Navy pilot training for the F-14, in the pursuit of their dream to become naval aviators. Both of their stories have struggles and triumphs held together by the thread of a shared dream. Aside from the aspects of the program that deal specifically with flying, S&A offers a rare look into the lives of these two aviators. Illustrating the idealism and determination it took to get to the point of flying, as well as the realizations of actual combat, S&A humanizes the experience like nothing I have seen. The only other program I can compare it to is the “American Fighter Pilot” series that follows USAF trainees through F-15 training. From the flow of the program to the quality of the aerial camera work, S&A beats AFP hands down. If you liked AFP, you will love S&A.

It is often easy for us “armchair aviators” to romanticize military flying. No matter how many books we read or shows we see about flying a machine of war, it is hard to imagine what living the life in and out of the cockpit is really like. S&A provides a balanced look at both sides of the equation, as well as a look into the modern atmosphere of combat units in the US. From basic training to actual combat in just over two years. Now that’s a reality check.

“So that’s great… touchy feely… I’m a pilot, aren’t I cool… Don’t I live in a different world… Isn’t my watch huge… What about the flying shots?”

You will not be disappointed. The cinematography, both in the cockpit and the external flying shots, is breathtaking. Tomcats fighting the Saints’ F-5s, Tomcats on and around the boat day and night, Tomcats in combat, in the cockpit, on the flightline, HUD shots, targeting imagery, carrier mishaps. It’s all there in living color (and night vision). Did I mention the Tomcats?

I wish I could talk about some of the specific sequences I really liked or things that made me laugh out loud, but I hate to spoil any of the gems for anyone who may see this in the future. Okay I’ll spoil one. They played the HUD and audio of Meagan’s first cat shot, and I swear it does sound like the most fun you can have with your clothes on…. and I’ll leave it at that!

So to make a short story longer, let me just say that if you like watching Dogfights on the History Channel, or Wings on the Discovery channel, you always download new videos of aircraft startup sequences / gun camera footage / etc. off the web, then Speed and Angels is a great program to add to your collection.

And for the Tomcat… Last Time Baby!  Get it while you can here.