Q. How has the team involved the owners / operators of existing period aircraft (original and reproduction) such as the Old Rhinebeck Aerodrome in defining things such as aircraft performance and handling characteristics?

A. We have contacted the Memorial Flight Association, and most of image references for cockpits and external details are based on their web site images they provided for us. They are very kind with their help and support to us. Thank you guys! Also, by lucky chance, their president is a SPAD XIII pilot, so we are really looking forward to a close contact with their pilots during the beta-testing stage of Knights of the Sky (KoTS). Also, in terms of airplane handling we have collected some replica pilots impressions through magazine articles and the Internet.

Q. How about things like sound recordings for accurate engine noise?

A. We have some from video / sound recordings. Some are freely available through the Internet, some recordings were provided by community members.

Q. Will the virtual cockpits match historic examples in terms of instruments offered and their placement, or will there be some sort of “standardized” compromise?

A. Every aircraft will have its own, unique cockpit instruments layout. We are trying to make them “real” — as close as we can with the info available, and actually, you can see the results on our update screenshots. 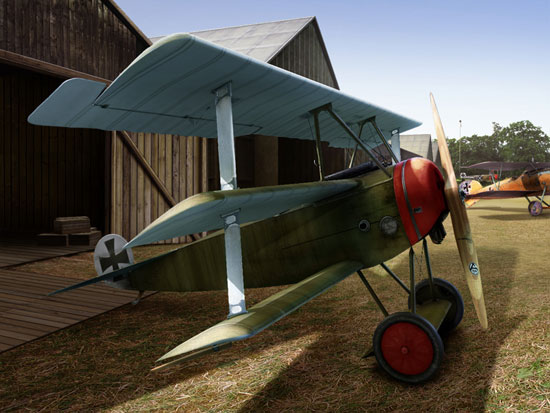 Comparisons to “The Benchmark”

When one thinks of WWI simulations, invariably the benchmark is Sierra’s Red Baron 3D, which still has a large community supporting and playing it. The hallmark of the sim beyond what (at the time) was enhanced graphics, flight and damage models, was the dynamic campaign, including personal challenges from historic aces, invitations to join other squadrons, and random encounters based on historical locations of units.

Q. Will KoTS have a similar dynamic campaign?

A. Not for the release date. The reason is time. By the way, as far as I know (please correct me if I am wrong) RBII was long in the development stage because of its detailed campaign and was released long after it was scheduled. But, it doesn’t mean that we will not try to make a dynamic campaign. We have everything we need for it — except time. So we are planning to make it an add-on.

Q. Will the campaign system be strictly historically based in outcome, or will the player have an impact on the overall war’s progress?

A. Historically based with player involvement in some “turning points”.

Q. Will the campaign environment be persist ant; that is, if a railway station or bridge is bombed in one mission, will it “remember” its destruction in the next?

A. Yes and no, since as I described we will have a static campaign for the release.

Q. Will ground troops and (later on) tanks be shown?

Q. Will gunner positions on two-seaters be modeled to where the player can jump to it much in the same way as in the IL-2 series?

A. Yes, but not for release because again a lack of time to make multi-crewed aircraft flyable with all fittings functioning (such as gun mountings / bombsights). The plan is to bring them in an add-on.

Q&A with Oleg Maddox on “Storm of War: Battle of Britain” Page 4