Now, let’s talk for a second about some of what we’re scheduled to see at this year’s show:

Flight Sims: Microsoft will be meeting with us to discuss Flight Simulator 10 (FSX). Oleg Maddox and the 1C team will be chatting with us about their upcoming projects. IENT will be discussing their “Road To The Thunderbirds” title being produced in cooperation with the USAF,

Race Sims: Last year, racing titles like GTL and rFactor were the most exciting new sims we saw at the show. This year, the only new title we expect to see is SimBin’s upcoming GTR2, but ISI will be at the show, and they have a few surprises for us (see below).

Tactical Sims: Ubisoft is here with Ghost Recon: Advanced Warfighter. The US Army is here with the latest iteration of America’s Army. And most exciting of all, Bohemia Interactive of Operation Flashpoint fame is meeting with us to discuss their newest titles. 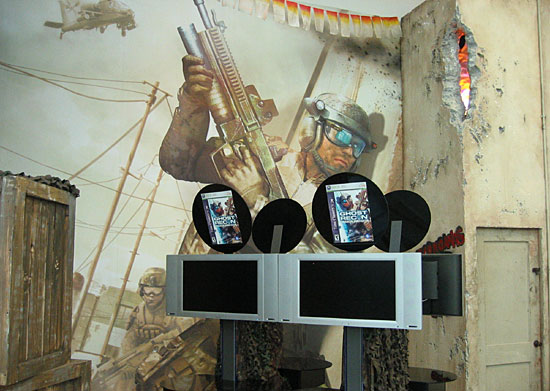 Part of the display for Ghost Recon: Advanced Warfighter.

Naval Sims: Akelia is here with their WW II PT Boat sim. We’ll be talking to them later in the week.

Hardware: We’re meeting with Ageia to get the low-down on Phys-X and it’s implementation in GRAW, and what promise it might hold for other physics-intensive titles. AMD will be talking to us about what’s on their roadmap. But the real excitement is in the field of simulation controllers: Saitek and CH Products were both eager to talk to us about their new controllers, and we’ll be strolling over to Logitech to see their new force feedback racing wheel.

Consoles: Yes, consoles. As SimHQ predicted last year, the first true simulations that successfully make the crossover from PC to console may be in the form of racing titles. SimBin is working on a version of GTR for the Xbox 360, and there’s a lot of buzz about Test Drive and MotoGP 2006 that we’ll take a look at as well. We’re still skeptical about true sims making it to consoles, but the proof will be in what we see here at E3.

Surprises: In the West Hall lobby there’s a really interesting banner hanging from the wall. What makes it interesting is the combination of images and trademark titles gathered on it: Intel, rFactor, and the Sauber Formula 1 team. Over at Logitech, there’s a press release about a new racing wheel that offers a gated 6-speed shifter and three pedals. At ISI’s rFactor web site, they’ve announced a partnership with US exotic and race car manufacturer Panoz. And Ubisoft plans to unveil their latest flight sim title at the end of the week. 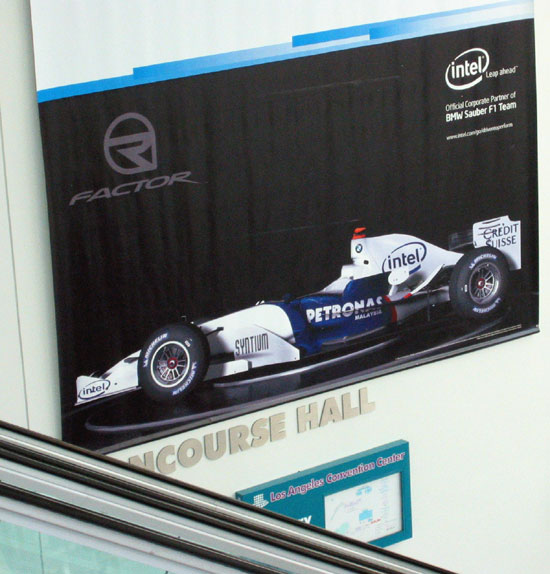 Between the depth and breadth of expected products and the latest surprises, our simulation hobby’s cup seems to runneth over this year — certainly encouraging news for us all. We can’t wait for tomorrow!