It was 4:30 PM, we still had one (and a half) interviews and two hours of E3’s Day 2 to go, and so far the only things the SimHQ team had consumed were half a cookie, two bite-size Snickers, a mini banana muffin and 4 oz of water. To say we were hungry was an understatement. But, with a day chock-full of productive interviews, discussions and visits with key sim-genre developers and manufacturers, the men of SimHQ found it impossible to find time to squeeze in a proper meal. And as you’ll see, this was a very interesting day.

6:45 AM came very early this morning, only 4 ½ hours after putting the first installment of our E3 reports up on the web, as our bodies finished digesting the Mexican food we had for dinner (where southwestern native 20mm successfully confused our waiter: “Flautas?! I thought you said, “fajitas” senor!”). The restaurant wasn’t such a good choice, but our judgment was no doubt clouded because just across the street was an exotic… hey now… auto dealer, with a lot full of Ferraris, Porsches and Lotus (Loti?).

For guod the wake-up was really difficult, because at 7:30 we were still waiting for him to finish his shower. When we suggested that he could catch a cab (a $50 fare) and meet us at the convention center, we finally got our fearless, sleepy leader energized and out in the parking lot.

LA traffic lived up to its reputation, which eventually put chauffeur Chunx into “Road Warrior” mode, wielding our SUV like a broad-sword through traffic as we forced our way off the freeway and into an all-too-expensive parking lot, and on to Day 2 of SimHQ’s E3 2006 Extravaganza.

Today was to be a special day for SimHQ: As holders of the coveted “E3 Early Access Media” badges, our men in burgundy polo shirts were part of the elite, the chosen few who would be allowed exclusive access to the convention for 2 entire hours of “private time” with the displays, the developers and the marketing reps before the swarm of lesser nerds and dweebs (like Hornit, who didn’t pre-register for the show) were able to infect the display floors and clog them like a over-used truck-stop toilet.

But it was not to be. Working like a well-greased computer, the E3 convention organizers failed to do the coordination required to get the corporate exhibitors onto the show floors on-time. So, we did what all good journalists do — we cued up like the cattle we are and berated the poor security guards about the foul up. “Hey, what time does the 9 AM early media access start?” Somehow that rhetorical and sarcastic question didn’t strike the security folk’s funny bone as hard as it did the other members of the press. 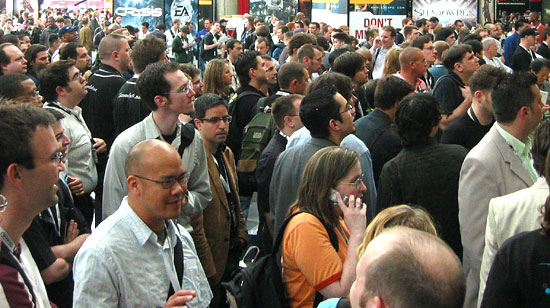 How many media people can you fit into a lobby?

But, by 9:20 the press were allowed in, and the lights, noise and drama of E3 2006 had officially begun. Here’s what your SimHQ team did today.

As our hungry Press-warriors left the building (with security guards in tow, as usual), we came upon the most humorous moment of the day: Outside of south hall were some very attractive young ladies protesting. Protesters? At E3? Strange, but true. Were they protesting geeks? Or old men who like hard-core simulations? No (well, they might not like us, but we weren’t the subject of their ire, even though they’ve no doubt been warned about 20mm’s “wandering hands”). These ladies were protesting the restrictive new rules about “booth babes” which had cost them some opportunities to pad their incomes. A picture says a thousand words, so take a look and draw your own conclusions. We certainly “felt their pain”.

After a short 1 mile walk to our parked chariot, it was off to a local Italian restaurant to ease our grumbly tummies before returning to our laptops for this installment.