Ok, I’m starting this off with two lines not related to anything to do with FSX. I made it to another E3! Woo-hoo! I haven’t been here for 3 years and it’s great to be a part of it this year. The SimHQ team hit the ground running today and we filled it with the sights and sounds of hardware, booth babes and the crush of tech hungry geeks.

Microsoft is showcasing FSX for the first time here at E3. We had a bit of a snafu when it came to scheduling. SimHQ had what we thought was a one-on-one developer interview that turned out to be something a bit less. Instead, there was an offer for one seat in a generic showcase, presented in a classroom-like environment. Such are the vagaries of the E3 schedule. We made the best of it, and ended up with the whole team attending the presentation due to some “no-shows” for the scheduled presentation.

The presentation was filled with good information. The buzzword for this version is going to be graphics. The improvements under the hood don’t seem to be quite as extensive as we saw with FS9. The graphics enhancements were displayed in the form of some screenshots mounted on media board. Each shot showed a scene from FS2004 and then with much suspense we were handed a shot of the same scene in FSX. I have to say I was impressed. I’ve seen most of the latest stuff from various places with numerous screenshots, but this really brought it home. There is no question that those of us who enjoy this sim are going to be pleased. This follows the general trend with the software in the past but with a bit of a twist. This version is going to bring Flight Simulator alive. 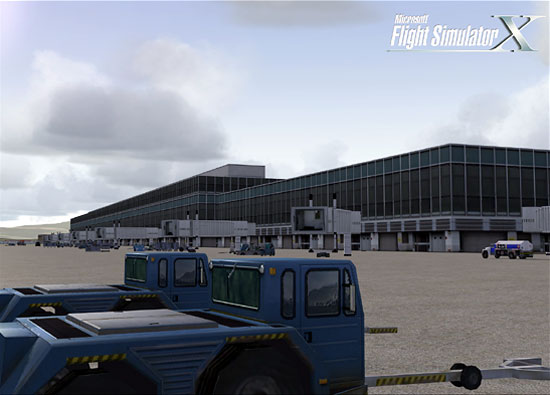 Three specific areas for improvement besides the huge graphics bump were emphasized.

Microsoft is bringing Flight Sim alive. No more will we see desolate airports roads and fields. The world is coming to life with moving vehicles, jet ways, birds and animals. Textures have been improved dramatically and full use of todays powerful graphics cards will be put to use. The video had moving cars, jet ways, bag carts, and animals. The African comparison shot had Giraffes! 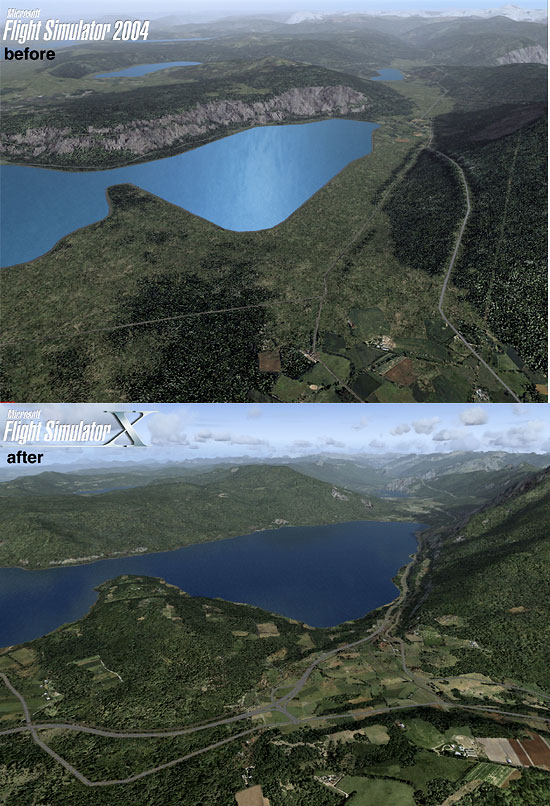 You can expect some dramatic changes in FSX scenery.
With DX10 (arriving in Vista) the image quality is almost shocking.

Microsoft is enhancing the multiplayer experience with more content and ease of use when it comes to flying on line with your fellow aviators. Voice over IP and a client/server set up versus the current peer to peer option.

This is not necessarily a new thing for Flight Sim. What appears very different is the fact that now the world interacts with you. It’s almost as if you stepped into a shooter that is masquerading as a flight sim. There are 50 missions which will ship with the software and we saw a decent video of a helo rescuing some men off of a burning oil rig. One of the developers then fired up the sim and took the Red Bull aerobatics team Extra and put her through her paces. Despite an embarrassing accident on takeoff and numerous hits to the racing pylons, Scott did a good job of showcasing the mission. The sim ran well, the mission appeared fun and challenging, and the textures and environment were noticeably improved. I have a very big hunch we are all going to need some serious hardware to enjoy all this eye candy. There ain’t no free lunch! 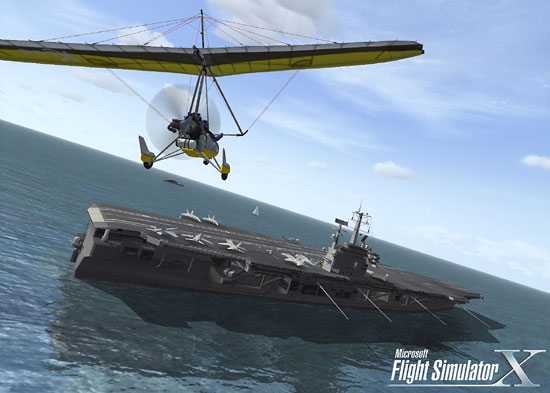 Microsoft is showcasing this as a Vista title but it appears this will ship before we see the OS hit the street. This will be addressed in a future update/upgrade which will take the user from DX9 to DX10 and Vista compatibility. This will be a free upgrade for those who have purchased the DX9/XP version.

Some great things are in store for FS fans with this latest version Microsoft’s Flight Simulator.
Just a few of the highlights we saw today include:

Early in the afternoon, we were able to meet with members of Lead Pursuit, developers of Falcon 4: Allied Force. We spent over an hour talking with Chris Partridge, Joel Bierling, Chris Carter, and Michael Kent. We discussed F4:AF and that LP is committed to continuing support of the product, following close on the heels of the release of their 1.06 version patch. They will be looking to enhance certain areas, check into any remaining issues and evaluate submitted third party mods. This type of developer support is much appreciated in the sim community.

This discussion lead in turn to one about the symbiotic relationship between flight sim developers and the makers of HOTAS gear and other peripherals. Obviously, one area cannot exist without the other, notwithstanding any notion of using gamepad-type equipment in a high fidelity flight sim like F4:AF. A partnership of sorts between software and hardware would appear to be key.

We talked about the philosophy of flight sims, what works and what doesn’t, what defines immersion, and about making storytelling a part of the package. Not surprisingly, people mentioned sims they felt did it right, that made you feel as though you were a part of something, that made you care about your mission, about the feeling of accomplishment when you succeeded, and about feeling sad when a wingman did not return home with you. The famous “suspension of disbelief”, but in an overall sense. It was very energizing for us, with a current Navy pilot, a retired Navy pilot flying civilian jetliners, and two “wanna-be but won’t-be pilots”.

LP was reluctant to discuss specifics of any upcoming projects they might have in the pipeline. But given their obvious commitment, background, and insight into what makes flight simulations the best they can be, we understood and look forward to more information as it becomes available.

We were happy to see CH Products once again, and meet with Debby McDowell and Michael Sexton. CH had two cockpit setups, with IL-2 and Falcon 4:Allied Force running, and their CH Pro Throttles, Pro Pedals, and FighterSticks. In addition, they had FS9 running on a three-monitor setup which was very cool.

Last, but not least, we got to see a two MFD setups (using the Ergodex technology) in both the cockpits, which had rows of buttons around the sides, which can be made to look just like the MFD’s in Falcon 4: Allied Force, and have the same function (assuming you program the software correctly) as the corresponding button on the MFD you see on the monitor. The screens can be made to look like the MFD in cockpit. What is more, you can detach the buttons and reattach them to the MFD wherever you want to, and they will work just fine. Just twist and they release. Push them where you want, they’re attached. Great technology.

CH Products used the Ergodex product to make the two MFDs mock-ups. It’s an idea — not an announced product. The images of the radar modes were not active. They were static shots. The buttons did work on the mode they had F4:AF set for. Pretty cool adjusting the settings by pushing the corresponding buttons. If you like the idea — or not — you might drop Michael Sexton at CH Products an email and let him know what you think.

Chunx and 20mm took turns flying Falcon 4:AF in the cockpits, using the CH gear, and trying out the MFD controllers. In the ensuing A2A combat, we took some hits, gave some hits, and it was all good.

Unfortunately, 531_Ghost was called away, for work of all things. Debby and Michael advised Ghost should return by Friday, so we hope to meet with the father of the “Franken-Potato” and see the invention itself.

We also had a chance to meet with SimHQ member, ruggbutt. It was great meeting and talking with a fellow member of our web site and talk a little sim-stuff.