Bohemia Interactive/Idea Games: Honors for SimHQ’s first scheduled interview at E3 ’06 went to the dev team working on the military tac-sim “Armed Assault.” Near the back of Kentia Hall’s meeting rooms, we were greeted by Dr. Robert Hoffmann and Jiri Rydl of Idea Games and introduced to the latest build of their two upcoming titles: Alpha Prime, a sci-fi shooter set in a mine on another planet, and Armed Assault, the latest iteration of the Operation Flash Point/Virtual Battle Space game engine.

Jiri and Dr. Hoffmann were eager to show us Alpha Prime, but honestly we knew that what our readers really wanted to know about (based on the questions you asked in the E3 forum) was the status of Armed Assault. Here’s what we learned:

Armed Assault looks and feels like OFP. It should, since the title’s is built from an upgraded and improved version of the same game engine. In fact, Armed Assault is essentially a public entertainment-ized version of the “Virtual Battle Space 2” military tactical simulator currently in use by the USMC and Australian Army, among others. As a result, Armed Assault has the look and feel of the USMC in terms of soldier uniforms, equipment and weapons, such as the M1 Abrams tank, AH-1Z Cobra attack helicopter and spiffy digital camouflage uniforms. 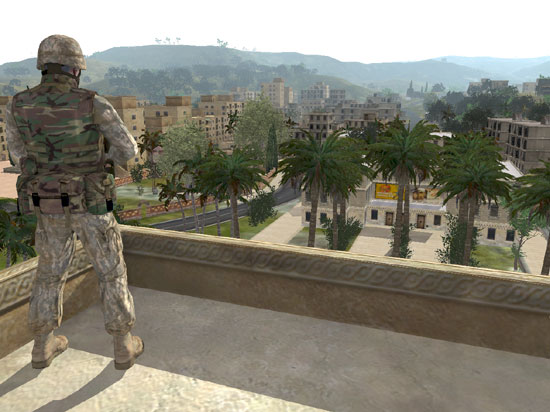 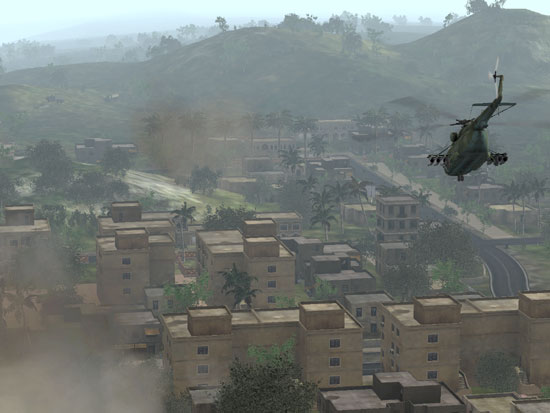 Dr. Hoffman described the concept for Armed Assault quite well. He said that if you consider Call of Duty 2 as the analog to a war movie with lots of action, then Armed Assault is analogous to a TV documentary on war.

Notes From The Interview:

We received this update Thursday evening on the question of system specification from Ondrej Spanel, Lead Programmer at BIS: “While 64-bit architecture performance is very good when running 32 bit code and it is possible ArmA is doing very well on 64b computers, Armed Assault is still a 32 bit application and there is no specific 64 bit support. On the other hand, current video card drivers often contain significant dual core optimizations, and as a result the framerate can often be 20-30% higher on dual core CPU.”

Since Armed Assault is derived from the OFP engine, the Doctor told us that the game will easily run on typical systems in use by most simulation fans.

That being said, while running a mission with visibility set to 1600 meters, and running on a high-end Dell XPS gaming system, Armed Assault demo mission looked to be running at about 20 fps. Time will tell just how smooth this game runs on a “modern” mid-grade system, described by Dr. Hoffmann as a 2 GHz-ish CPU and a GeForce 6600-ish GPU. 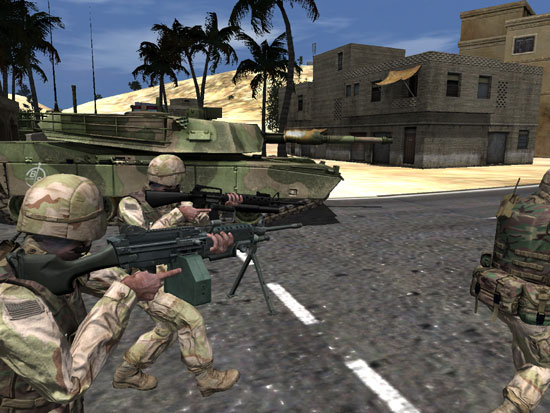 Idea Games & Bohemia Interactive have not yet found a publisher interested in Armed Assault. However, they expect to find one soon. When asked if they would consider offering the game direct from the developer ala ISI’s rFactor, the answer was that it is an option they are prepared to take if no publisher is found.

Although Jiri stated that the game is still in a late Alpha development stage, he expected the game to be ready to go “gold” in July of 2006.

Gut Feel: Armed Assault feels like a blending of the best elements of Operation Flash Point and Novalogic’s Tactical Operations and EA’s Battlefield 2. It should be a fun title with a lot of flexibility, yet retaining a very tactical and challenging feel.

Sim Racing Cockpit: VRX, a Canadian company (eh?!), offers a nifty racing cockpit that was on display again this year in Kentia Hall, near the 1C and CH displays. VRX previously only sold to customers in North America, but has recently signed a manufacturing deal in Poland to build and supply European racers with the VRX cockpit.

Priced at $3495, the VRX is a “rolling chassis” concept: The unit is complete and ready to go, requiring only a monitor or large screen TV to start racing. Built on a chrome tube chassis with adjustable support panels for monitor, wheel and pedals, the VRX comes equipped with a Sparco racing seat, 5.1 sound system, and a “Butt Kicker” 1000 Amp sub-woofer mounted below the seat. While it may sound expensive (and it is), at a price point 1/10th that of the superb Virtual GT simulator, the VRX is a very competitive product in it’s market niche. For example, VRX PR rep Colin Plint told us that Frito Lay recently purchased 4 VRX cockpits, using them to promote their sponsorship of a NASCAR team. Their utilization concept is to take the VRX cockpits to Wal Mart stores near NASCAR race events, and allow consumers to compete head-to-head in EA’s NASCAR Sim Racing (the official race sim of NASCAR, regrettably). Winners receive Frito-Lay themed prizes. 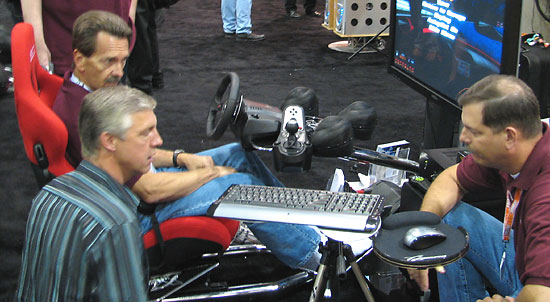 Much to Hornit’s chagrin, guod, Chunx and 20mm had a great deal of fun turning laps (after lap after lap) in the VRX cockpit, finding the sound system and Sparco seat to make for very comfortable driving experience. And while it’s nice that the VRX provided an entertaining diversion for our reporters, more importantly the VRX cockpit in served as a vehicle (pun) to showcase not only SimBin’s GTR2 but also Logitech’s new G25 force feedback wheel (and in another location, rFactor’s collaboration with Intel Corp. More on that later). Without a doubt, the VRX/GTR2/G25 combo provided some very enjoyable laps at Spa Francorchamps that sucked in guod, 20mm and Chunx like a Sim Racer Roach Motel: SimHQ racers climb in, but they won’t climb out (just ask Hornit).

Look for more on GTR2 and the Logitech G25 wheel in later reports from E3.