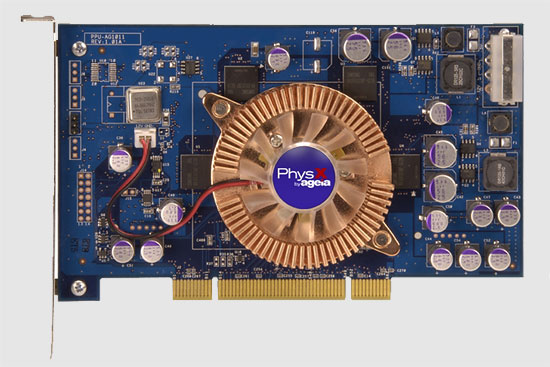 This is going to be a big deal. The next “big thing” when it comes to gaming and simulations. A dedicated physics processor for PC games. I have to admit some ignorance here. I’ve been a bit behind the power curve when it comes to cutting edge stuff in the software and hardware world. The other “gurus” who I am with were perfectly aware of this technology. We dropped in on Mike Steele with Ageia for a presentation of the PhysX technology. Mike was obviously excited about the product and it’s evident that this has gained some real momentum since last year.

Ageia is on the cutting edge of physics based hardware and software development. It took me a bit to wrap my head around what this really is. Simply put, the PhysX hardware adds a new dimension to the gaming/simulation experience. The PhsyX processing unit (PPU) becomes the third leg of a triangle made up of itself, the CPU, and the GPU. The PPU becomes a dedicated processor to calculate and provide real world movement to your game. Explosions which cause dust and collateral debris. Smoke and fog that billow around objects in motion. Weapons with unpredictable effects. Imagine a tank driving through soft ground. Your following as an infantry unit behind. The tank cuts a deep trough in the mud you can use as cover. It might not happen the same way twice. You can crouch inside that trough and get wet, or get stuck in the mud. The really interesting thing is it will be different every time you do it. We talked about things like wind shear in a flying game, real turbulence and wind effects. How about the effect of temperature on your tires while your pushing the limits at Le Mans? All this becomes possible with PhysX enhanced game and the PPU. Are you going to need beefy hardware to take advantage of this cool stuff? Well what do you think? There’s no free lunch. The reassuring thing I see though is that it’s already being implemented on today’s hardware. It works now. I think that bodes very well for the future.

Think of it like this: The CPU thinks and orchestrates, doing just what it always has. The GPU pushes pixels to your screen, and the PPU takes care of movement and interaction. A triangle of gaming power. I let this sink in for a bit as we watched the game Cell Factor being played. It’s a technology demonstrator which includes the PhysX technology. The game displayed some very interesting fluid and cloth effects in which it became very evident that this could revolutionize the way we game.

Right now the PPU sits on it’s own PCI slot. Ageia had a box with ASUS’s first version of the card, the P1. It’s early and it will take a while, but this has great potential for the future.

With every new technology there comes a teething period. Ageia has some very big backing and they’re gaining real traction with developers. Currently there are 65 developers working on over 100 games utilizing PhysX. There may be a few glitches here and there. Mike addressed some issues with Advanced Warrior concerning frame rates. He said they had pinpointed some specific problems and it was being fixed with drivers and a tweak to the game. I wouldn’t expect things to go perfectly as this is integrated into current and future game and hardware architecture. It’s always like that with anything new and revolutionary. Look back at the rollout of 3D. I don’t recall it going perfectly. I do see it being something which will revolutionize the gaming experience. It was obvious Ageia has the attention and the support of the community. They have the blueprint for making this an exciting addition to our gaming future.

We hit the Saitek booth in the afternoon. Our mission centered around the new Saitek Pro Flight Rudder pedals. Shana Starr greeted us and showed us around the booth. We settled on checking out the new pedals on display hooked up to a rig running Microsoft’s Flight Simulator. I got a chance to mess around a bit and was very pleasantly surprised. The pedals looked good and action was smooth and accurate. The USB pedals were constructed of tough blue plastic with a metal support structure. Pots are variable mechanical and the feel was smooth, but crisp enough to do some more advanced acro. The tension adjustment was easy to use and effective. I liked them so much I’m going to get a set of my own!

After flying for a few minutes I let Chunx jump in and try them out. I sat back for a moment to see how long it would take for him to pick up a problem I found with the game set up. To his credit he did sense something wasn’t quite right, but this old airline pilot had to point out that the rudder axis was reversed. It was amusing seeing the contorted look on his face while he puzzled out what was wrong. 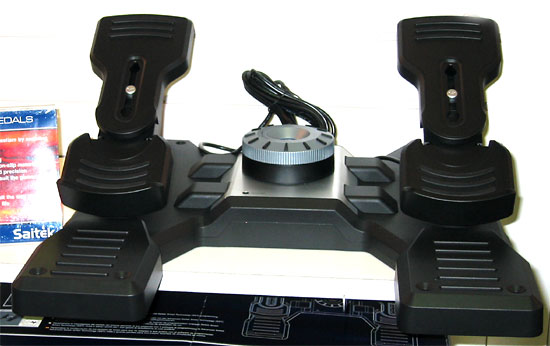 Rich Neville showed up and gave us the expert scoop on the rudder pedals and the latest tweaks to the hardware. There are a few minor issues that need to be addressed. The toe brakes need a tweak or two. The toe brake action is too soft and the fix will be to tighten up the springs. Also the travel on the brake action needs to be reduced a bit. Rich agreed and assured us these issues would be addressed. Saitek is doing a great job and these rudders are proof. Rich said the pedals should be available this July. Retail for the hardware will be in the $130 range.