Last year there were several helicopters flying over downtown LA. The only helicopters I saw or heard today, were at the CH Products booth and known as DCS Black Shark. Oh my! You hardcore study simulation fans have reason to rejoice.

Just please keep in mind though that this project is still under development and some of what you see here may well change in the final release version. And no, Matt didn’t ask me to say that, but it’s just to be clear and a matter of courtesy. 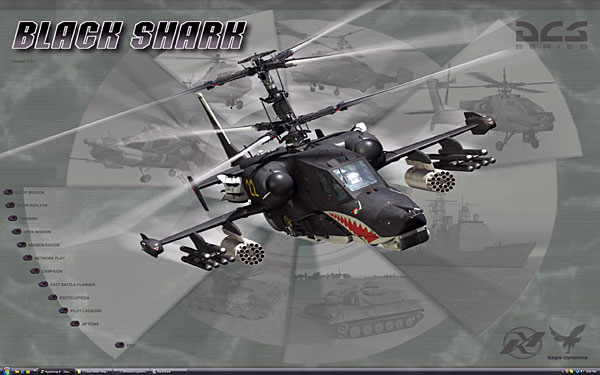 In that vein, here’s a picture of the Weapons Load Out Menu. Lots of Russian words and acronyms in there… 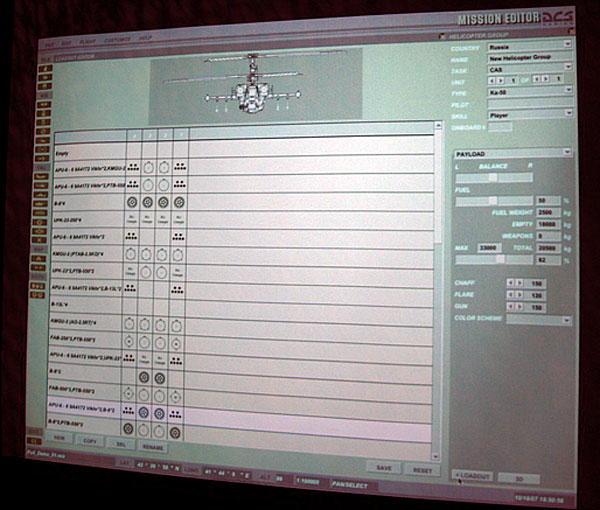 And this is before you actually climb into the cockpit and start pushing those buttons we all live to push.

So, what was it like to fly a Ka-50? In a word, incredible. Another word that comes to mind is fidelity. Fidelity meaning it feels like the truth, the real deal. And that is something very good in a combat helicopter simulation. It’s there in the cockpit, the startup sequence, everything in that cockpit is touchable, clickable, and it works. I noticed the windshield wiper as Matt was flying and commented on it. And sure, it works. But not only does it work, it has 4 settings. Small detail? Maybe, but it’s high fidelity to the actual aircraft. 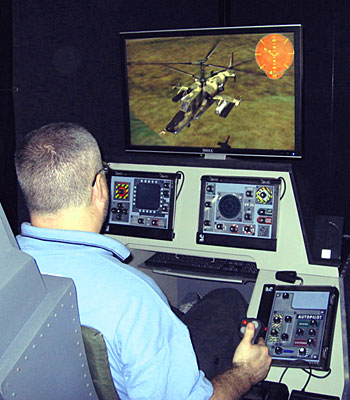 The flight model itself seems very tough but believable. Not that something has to be difficult to be high fidelity, but to learn it and do it well takes time and practice. You can feel the weight of the aircraft. When the gun goes off, it yaws slightly in reaction to the recoil.

Flying in combat with the settings notched up, the added workload and stress makes it difficult. Eugene then took the autopilot controls off, and flying without them was even more difficult. Well above the autopilot aided flight, but still doable. Maintaining low level flight and maneuvering against people who have deadly weapons and want to kill you can be tough!

Here’s another thing: How long has it been since we saw a true hardcore study combat flight sim? We were talking about that, and although I could guess one of the Janes Combat Sims, I’m not really sure. Yes, there have been simulations released that built on earlier released products, and there’s nothing wrong with that, but this is different. It’s why Digital Combat Simulations coming into the picture is a big deal. This is not another version of LockOn (LOMAC) with a different aircraft. It is truly a stand alone product.

Okay, back to “what was it like to fly?” Tough! At least for me it was. It’s been quite a while since I even touched a helo sim — the modded EECH — so getting used to it was a bit of a relearning experience …plus.

And that’s just flying. Fighting well, that’s another matter. I got shot down a couple times, I fired rockets at the bad guys and missed, I used the cannon to shoot at the concrete runway to watch the ricochet effect (cool!)