Writing for SimHQ, and helping run the site, introduced me to the idea of a “virtual team,” where people from across the nation, and around the world, work jointly to create something great. And as often as we used to say,“If you’re ever in [insert locale here], we’ve got to get together and have a beer,” it rarely happened, especially for those of us outside of major cities.

So, in early January 2002, when Andy Bush e-mailed that he’d be flying the masses into Hartford, Connecticut and had a one-night layover planned, I jumped at a chance to get together with him. Andy is a great guy, and I’ve always enjoyed what he brought to the site; a “no-bullshit,” here’s-the-way-we-used-to-do-it attitude that produced articles our readers loved, and a presence on our message boards that people sought.

With a few days to spare before his visit, we coordinated the details of finding each other in the terminal. Bradley International Airport, a few miles north of Hartford, is not a massive facility like O’Hare or Kennedy, and so we quickly had it all worked out, or so we thought. I’d meet him where the vans picked up passengers by the luggage carousal, and I’d wear a white baseball hat. I’m six-foot, six, and Andy would be wearing his pilot’s suit, so between all of that coordination, finding each other was going to be the easy part. Getting to the nearby New England Air Museum before they closed at 5 PM would be the challenge.

His flight arrived on-time at 2 PM, but there was no Andy to be seen. In what can only be described as a Stoogesque comedy, he and I somehow missed each other for more than 35 minutes, as we each nervously and independently watched the clock. I went upstairs while Andy went downstairs, and he went upstairs as I went downstairs.

I was about to reach into my pocket for a quarter to call home when I heard a voice behind me on a pay phone, telling someone on the other end, “I don’t know where I put it, and I don’t know where he is. Check for the number by the computer.” I looked; it was a pilot talking. Could be him. I thought. I looked down at his travel bag, emblazoned with Warthog and TAC unit patches. Yeah, that’s Andy. And then he looked up and had the same thought I did. So much for planning!

We made it to NEAM by around 3, which gave us precious little time to do the self-guided exhibits the justice they deserve. But what a tour! Going to an air museum with Andy Bush is like having an interactive copy of Jane’s with you.

We’d missed NEAM’s “Open Cockpit Weekend” by one week, so Andy didn’t get a chance to climb back into an A-10 or an F-4 again, but he was still like a kid in a candy shop, and it was all I could do to even keep up with the stories. Every plane told a tale.

Walking by the A-4 Skyhawk? I heard about the time that while in DACM (Dissimilar Air Combat Maneuvers) training, his F-104 unit heard of a surprise that the hosting Skyhawk drivers were planning for the next day’s exercise. The Mach-2 Starfighters then planned a little twist of their own and left the subsonic A-4s in the dust by coming from an unexpected direction, at the speed of heat.

I couldn’t even begin to count the stories that the F-4 and A-10 exhibits produced!

One in particular stood out; Andy was due to get an evaluation flight in the Phantom. For whatever reason, the evaluator had a history of being a tough critic, and Andy was dreading the experience. Andy described how, in the pre-flight, pilots used to go up and slap the external tanks with their palms to do a quick auditory check of their fuel level. In this particular flight, the evaluator was in a hurry and rushed the two-ship flight onto the runway. Andy took off with the evaluator in tow, but only minutes into the flight, Andy heard a message that he had passed the evaluation, and to RTB immediately. It wasn’t until later that day when Andy learned secondhand that the instructor had taken off with little internal fuel and dry tanks!

The stories went on. We walked outside and immediately gravitated to the MiG-15. Andy recalled how one time over Vietnam, his F-4 flight was flying an escort mission for a strike package. Looking down, he saw what he was sure was a MiG-17 coming up low and fast on the strikers. Rolling in on the bandit, he quickly discovered that it was actually a wayward A-7 Corsair II.  Standing in the cold, looking at the swept wings of the MiG and comparing it to the museum’s nearby A-7, I could easily see how that mistake was possible.

And it wasn’t just the military aircraft on exhibit that got his attention. I learned how, as a young pilot, he had come across a farmer with an old but working Piper Cub behind the barn. Taking it for a spin, he realized that what gauges there were weren’t all functioning, but the clamshell door itself, loose in the wind, was acting as both an airspeed and angle-of-attack indicator, rising and falling based on the attitude.

There didn’t seem to be any aircraft there that Andy didn’t know about. The museum’s rare Burnelli CBY-3 Loadmaster “lifting body” transport? Andy looked at it for a second, and without even hesitating, said, “Hey, I just read an article about this!”  The even more rare Sikorsky VS-44A flying boat? He walked into the civilian hangar, looked up at the massive wing above, and knew exactly what it was.

It was a great experience, and we managed to finish the quick walk-around by the time they were closing up. We spent a little time and a little more money, in the gift shop, which has an impressive collection of models, and away we went, wishing we had a few more hours.

Over a few beers at dinner, it was like old-home day at SimHQ. It’s always struck me as an odd sensation that you can spend years e-mailing your friends online, and know nothing about them, but we made up for that a bit with “war stories” of the site, life and everything else.

We had a great time; in fact, it’s stuck in my mind since as one of my best SimHQ memories. Andy, next time you’re in town, I still owe you a Guinness as a “thank you!” 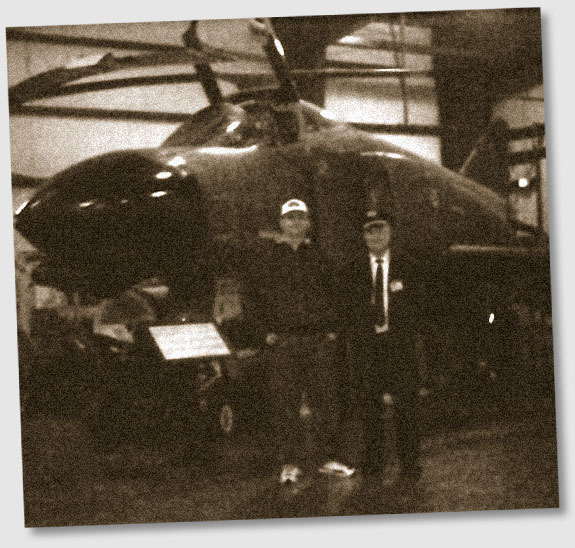 My Most Memorable Page 2

My List Page 2
From SimHQ Towers: Confessions of a Sim Site Owner