If I had to think up a name for the year 2007 as far as Aviation & Air Combat goes, I would have to title it something like: “2007 – The Year My X52 Rested”. Indeed, I spent more time playing land and sea combat sims (Armed Assault & Silent Hunter 4) than my first love, air combat simulations. I was able to round out my LOMAC Flaming Cliffs training missions in the Su-25T by publishing eight more missions through March of 2007, but after that, I could have put away my X52 until December when X-Plane 9-beta was released.

I was able to get some stick time mid-year when the much anticipated sequel to arguably the best combat helicopter sim ever was released: Enemy Engaged 2. After spending many hours putting EE2 through its paces for the review process though, it was shelved with hopes for future tinkering by the brilliant mod teams that have kept Enemy Engaged pertinent for the past
eight years. 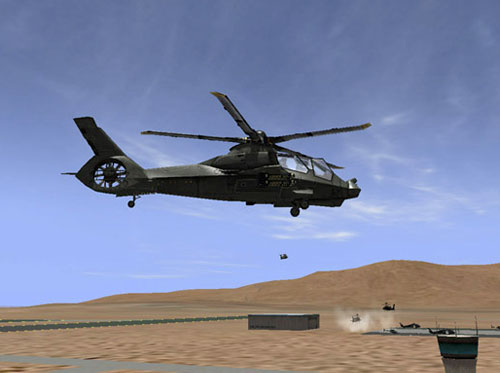 The Strike Fighters community enjoyed a great year with continued modifications at various levels from amateur through professional (payware). Each time I peek into the SF forum I’m amazed at the new models, skins, and terrains that are being released each week. I can see that I’ve been missing out on the whole Strike Fighters evolution, but fortunately we have enthusiastic staff members that have been participating in and covering the developments.

Throughout 2007 I have been quietly watching the progress, or at least the reports of progress, of Fighter Ops. The concept of Fighter Ops is very near and dear to my heart — a module-based release schedule that builds upon a solid foundation. I have high hopes for the project and am willing to give the guys over there the benefit of the doubt for their unorthodox development plan.

Additionally I’ve had the good fortune of participating (although I’d term it more like “witnessing”) in the beta testing period for DCS: Black Shark. Without getting into the details, I can honestly say that this is the most complex simulation of a military platform I’ve ever seen. I predict that a lot of us are going to spend a lot of time with our heads buried in the manual trying to figure out all the capabilities of the KA-50. We wanted ultra-realism — we are getting ultra-realism.

As far as civil aviation is concerned, X-Plane 9-beta was released on Thanksgiving in order to provide a diversion from the normal routine of interacting with our dysfunctional family members. Unfortunately the beta release was a bit buggy at first, but quickly shaped up as fixes came down the pipe at a furious pace. Currently we are up to the 13th fix and stability and features continue to improve. 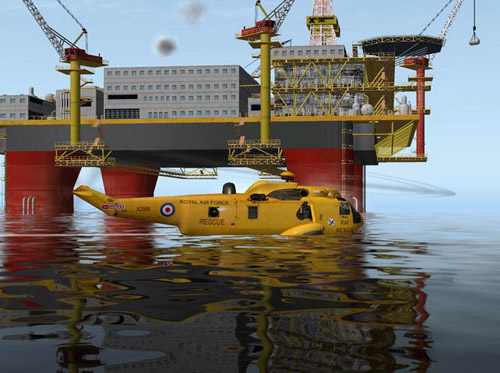 Meanwhile the heavyweight, Microsoft’s Aces Studios released their FSX Acceleration pack for FSX. The additional content is, in my opinion, nifty, but doesn’t really add much to the experience. With more detailed 3rd party development appearing for FSX I think Acceleration will be far outpaced by the brilliance of the aftermarket developers.

Stay tuned in 2008 — we are hoping for some interesting developments on several fronts. I will enjoy shooting rockets at ground pounders instead of spending so much time in Armed Assault firing at airborne targets.

Genesis Of A Flight Sim – Part 1

Out of the Mothballs: Jane’s USAF Revisited

The ’56 Suez Crisis Mod for the ThirdWire Series

Jane’s USAF (Backstage) – An Interview with the mod developers

Gennadich Team – Knights of the Sky

Some of the Best…

The biggest disappointment in flight sims in 2007, and arguably for years, had to beWhirlwind of Viet Nam. After seeing it presented year-after-year at E3 in development, we drooled in anticipation and waited. Then when we saw the (final?) buggy released version, we couldn’t get away from it fast enough.

What a freaking stinker it turned out to be! I honestly believe they could have released that, in the condition it was in, two years ago. It looked exactly the same as we saw it at E3 2005. And that in and of itself wasn’t bad, but OMG, this thing had more bugs than the basement of a tenement in New York City.

Helicopters taking OFF into the GROUND, crew members disappearing in flight, a grand total of 10 missions, no campaign, no multiplayer, no mission editor, shall I go on? You could read my review where I did go on. And you know, with the passage of time, it really pisses me off even more to see this thing released like it was. And what made it worse, was it had potential. It really did. It wasn’t all bad, the sound for example was top notch, but they screwed the pooch.

In my opinion, a case where a developer / publisher said, “Yeah it’s not done, but hell with it, we’re DONE WITH IT, so let’s see if we can get some people to pay for this garbage…”

SimHQ even had a forum dedicated to garbage, and several people of questionable origin came in there and swore how great it was. How things I knew damned well didn’t exist, did exist. I’m not a conspiracy nut, but it made me wonder what kind of weed they were smoking or what their agenda really was.

Things died off in that forum, no one from the developer (who admitted to being so) ever checked in.

No one ever responded to my email requests, and the forum died as well.

Good riddance to one of the most worthless simulation titles I’veever seen.

We Need A Forum So We Can Talk About… Nothing

2007 saw our membership within the flight sim community clamoring for two separate forums for upcoming flight sims — Knights of the Sky and Storm of War: Battle of Britain, as they promise to be unique and worthy of in depth discussion.

Within a few weeks both forums filled with disgruntled threads about the lack of information on each simulation and accusations that both are little better than vaporware, all due to…

2007 also saw developers keep what was going on with the progress of their sims highly secret. It’s their product getting made, and only they are allowed to look at it and know how it’s going.

The really frustrating part of the Flight Sim world is the blackout in information by developers.

We know they’re working on them and (in general) are very supportive when we see work-in-progress shots and information. I don’t understand why everything is suddenly Top Secret.

Not Even Seen on a Milk Carton

What the hell happened to Lead Pursuit’s “C3PO”? Thanks to “Ed_1” for visiting us but we miss Chris too! After posting a couple of times during 2007 in our forums and Frugalsworld, he seems to have vanished. This is really a shame. Hope you’re doing okay Chris!

Please developers — tell the EECH community what they can access without you objecting?

Aw Come On! You Know You Want To!

Will someoneplease make a “real” flight sim for the console market so we hard core simmers will have a good excuse to buy a 3rd generation console unit?

What Lake Was That Again?

Microsoft FSX arrived and was rightfully heralded. Well, by most of us. Then we waited for the DirectX10 update that would provide new adapters of DX10 compatible video card owners screens like the suggested promotional renderings. We’re still waiting.