E3 is back and so are we. This week, five SimHQ staffers — Chunx, Magnum, 531_Ghost, Joe and guod — will bring you daily and nightly reports from the show floor. Despite the crowds, noise, and hectic schedule, we look forward to the surprises and excitement typical of every E3Expo!

LA is my old college stomping grounds, and even though that was nearly a quarter century ago it takes me little time to re-acclimate to the hustle and grind of freeway traffic and local driving styles. That bit of personal experience makes me both the SimHQ tour guide and chauffeur every year that we make the pilgrimage to E3.

I was the first of the group to arrive at LAX, and having obtained an SUV large enough to haul four full-size adults and their gear I began picking up the rest of the crew as they arrived.

Magnum arrived just before noon. This is Mag’s first trip to sunny (or cloudy) SoCal, so I wanted to make sure he got the full cultural exposure. We had lunch at a local Mexican fast food eatery, then I took him on a “windshield tour” of the more scenic local area. That included a drive through Bel Air, Beverly Hills, and Rodeo Drive. After that, we cruised down Sunset Boulevard until we hit the Pacific Coast Highway, and back-tracked along the beach to Santa Monica pier before looping back towards the hotel.

Although Magnum can be a bit enigmatic at times, I’m sure he found the drive to be pleasant and quite scenic. But I had no problem judging his level of attention when I introduced Mag to the local Fry’s Electronic superstore! As always, Fry’s immediately makes any computer hobbyist feel like the proverbial “kid in a candy store“, and is a must-visit location for the SimHQ team. As we left the store Magnum could be heard muttering something about needing a Fry’s in his town…. In any event, it was great to be able to show Magnum around as we talked about our first computers, our first games, and the latest sim developments. Along the way, Magnum checked his Twitter account and picked up some new developments from the gaming world, announcing new titles like Forza Motorsport 3 in what are now the opening shots of E3 2009.

Doug was the next to arrive at LAX, and when he called from the terminal we swung by to pick him up. Doug got a kick out of Mag and I holding up a “Mr. Atkinson” sign!

Once back at the hotel we converted Doug’s room into a real SimHQ “Headquarters” — setting up computers, network cables, and rearranging the furniture to suit our computing needs while we waited for Joe to arrive in the early evening.

Joe arrived in LA in the early evening, and after collecting him from the airport the four of us headed out for a nice dinner on the town. Like every ‘first night’ get together, our conversations wandered across the gamut of computers and computer gaming. We even found time to discuss some of the more bone-headed police encounters we’ve had in our lives…. Much to the delight of Magnum (not). Sorry, Mag — couldn’t resist.

While we were there, “531_Ghost” called to say he was inbound to the hotel. A few minutes later, he called again to say he was driving back home — to retrieve his wallet! D’oh! Luckily traffic was light, and he was able to meet up with us at the hotel that night.

One more trip to let Joe experience the Fry’s store and it was back to the hotel so Doug could put his minions to work.

I arrived in the land of fruits and nuts before noon. Chunx was kind enough to pick me up at LAX, but since guod had missed his flight and would be late, we had 6 hours to blow. So I got taken on a tour of Beverly Hills, the Pacific beach which I have never seen before, along with many other classy places. But my favorite was the trip to FRY‘s, a super geek computer store, now I need to demand that one be opened up in Florida!

A word about LA… just imagine your local industry complex; now times that by about 1000 and you’ll have a picture of LA. All gray, all massive complexes, little to no green.

By 6 or so we all have arrived, Chunx, Doug, Joe, Ghost, and I. We did the dinner thing, talked about computer games most of the time. If my 16 year old daughter saw this she would call us the true geek squad. She already laughed when I told her I was going to LA for a community conference.

Today was a hectic travel day for me. It started out that way from the beginning; I left for work only to realize that my wife had my wallet, and she had headed in the other direction. 2+ hours later, when I finally made it to the office, I managed to squeeze in a little actual work before heading for the airport. I’m also feeling a bit under the weather with a sore throat, and I hope my voice holds up tomorrow.

I was told by Matrox that there would be a press release today about a new product of theirs, but I see nothing on their web site. We’re going to try to get together with them tomorrow, so we’ll see what’s up then. We also have a meeting scheduled with CH Products. 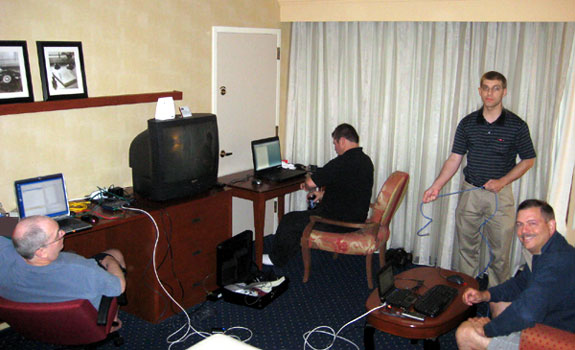 The SimHQ FBO this week at E3Expo. Left to right are: guod, Magnum, Joe, Chunx and 531_Ghost taking the photo.