In the year 2000, Big Time Software and Battlefront.com released a title that took the wargaming genre by storm. Combat Mission: Beyond Overlord was a unique mix of 3D graphics, hard core realism, interactive gameplay, and immersion that instantly made it one of the classics not only of wargaming, but of strategy gaming in general. The praise and accolades for this title continue to this day. In the increasingly crowded field of WW2 based games CM:BO still stands out as one of the best.

About a year ago the sequel to BTS’s title was released. Combat Mission: Barbarossa to Berlin expanded on the original title, taking the gamer from the hedgerows of Normandy to the steppes of Russia. While there were some changes to the game, mainly involving interface improvements and some graphic upgrades in general the game stayed true to its roots and developed a following of its own.

I have had the opportunity to play BTS’s latest offering in the Combat Mission series. Combat Mission: Afrika Korps continues the tradition of the series but this time transports the gamer to the deserts of North Africa and the mountainous terrain of Sicily and Italy. In addition it introduces the soldier to the Italian Army, which had more of a minor role in CM:BB. In CM:AK the role is much more pronounced.

The question is raised with this game. Will the third time remain the charm for what is essentially becoming a four or five year old engine? In the early 90’s SSI came out with a game called Panzer General, still considered among the 10 best computer wargames ever created. This led to a series of add-ons ranging from Allied General, to Fantasy General, to finally Pacific General. Over time the tarnish built up on the PG engine until the final version collapsed under the age of the predecessor. This isn’t the first, nor will it be the last, time a game has had one too many versions released. The question then is, how well does Afrika Korps stack up in 2004? 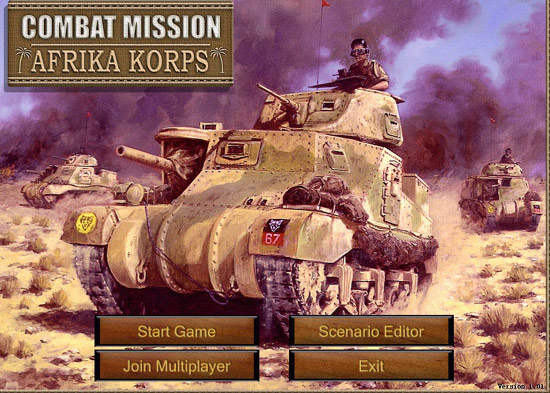 Combat Mission: Afrika Korps covers the period from 1940-45 in which the forces of Benito Mussolini fought against Great Britain for control of the North African desert regions as well as for control of the oil rich areas of the Middle East. Later Germany and the United States were drawn into the region. As the period progressed Italy herself was invaded.

The history of the African continental war started years before the conflict erupted on mainland Europe. In August 1936 Mussolini annexed the country of Ethiopia and in his subjugation of that impoverished nation released ferocity on the civilian population that was eerily predictive of the savagery that occurred six years later on the Russian Steppes. His control of the African nation placed Britain in a precarious situation, flanked on two sides by potentially hostile Italian armies in Libya and Ethiopia.

When the conflict broke out in September of 1939 Italy, although a signer of the 1936 Axis pact, stayed on the sidelines. Through the ‘Phony War’ of 1939 and early 1940 the question of Italian intervention was still unanswered. The blitzkrieg tactics of May 1940 solved the question once and for all. Mussolini, wanting to get in on some of the glory and thinking both Britain and France were finished, declared war on the Allies on June 10th. In a sign of things to come he attacked the French in southern France and was immediately bogged down.

Mussolini, figuring Britain was just weeks from being destroyed by the Luftwaffe and Wehrmacht decided to strike from Libya early so as to gain the most territory before any peace treaty. Holding the Suez canal would be a very ripe plum in the hands of the man that considered himself Hitler’s protégé. Italian armies advanced 60 miles into Egypt in September of 1940, stopping at Sid Barrani. On paper the Italians had a massive and overwhelming superiority in troops and materiel, almost 3-1 in troops alone.

Unfortunately, the superiority was not as important as the quality of the troops. Most Italian tanks were either terribly unreliable or were hopelessly outclassed by their British counterparts. Likewise most Italian infantry were simple foot soldiers, fine for the terrain in Italy or France but woefully inadequate for the distances and extremes of the Egyptian countryside. Very few Italian infantry units were motorized and this led to a severe mobility problem in what is considered probably the best tank country in the world.

The British counterattack, led by Sir Archibald Wavell, commenced on December 9th 1940 and was more successful than the British dared to hope. The Italians, although vastly superior in men and equipment, were routed at Sid Barrani and were driven half way across Libya (almost 500 miles) in litter over three months. The demoralized Italian armies were close to collapse. Exasperated Hitler was forced to divert valuable troops and equipment to shore up his ally. In February of 1941 a man associated with desert warfare arrived in Africa; General Erwin Rommel.

Shoring up the Italian army (and proving that the Italian soldier can fight) while introducing his new German troops into battle Rommel struck at El Agheila in later March 1941. Catching his British opponents tired and overstretched he drove Wavell all the way back to Tobruk. The stage was set to start some of the most exciting battles of the Second World War, and in some cases the only good news to hit Britain during these dark days.

Explaining the rest of the conflict, from El Alamein to Tunis, to Sicily, to the Gothic line would take forever and is not in tune with the idea of a game review. Needless to say Combat Mission: Afrika Korps tries to simulate some of the company and battalion level actions that occurred during these periods.