Remember the old-fashioned real-time strategy games of a few years ago? Back in the late 1990s, it seemed like just about every wargame publisher was imitating the old Westwood Studios game Command and Conquer. C&C has been through several iterations, with C&C: Renegade being the most recent. The genre is familiar to most wargamers. The player scrounges resources, then builds overwhelmingly large armies to smite the enemy, while playing within the confines of an overarching story. Literally dozens of clones have erupted onto the wargaming scene since the original C&C, and the formula never really changes. The emphasis is always on gathering…and building…and not so much on fighting and blowing things up. Although logistics are the lion’s share of mechanized combat, the overwhelming emphasis on resource management in most C&C-style games can be boring to a computer wargamer, who’s looking for battlefield tactics and strategy. Very few science-fiction/land combat wargames have broken the mold. 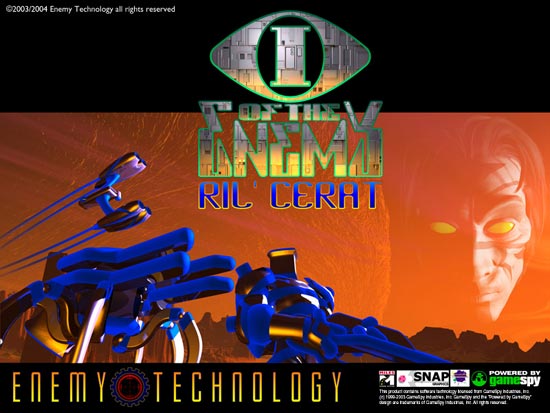 Enter Enemy Technology. This independent California studio, headed by former U.S. Marine officer Mark Temple, has a new product that’s recently been picked up for distribution by indie retailer Matrix Games. This is I of the Enemy, and this is something old, something new, something borrowed…you get the picture. It’s a refreshing retro-take on tactical combat games of the past and once again the present, and I find it something of a mix of Atomic Games’ old Close Combat series, combined with Command and Conquer, with a neat (though well-worn) storyline tying it all together. They’ve won a number of independent-developer awards for I of the Enemy, and you can see for yourself, as well as download Ril’Cerat, the game’s first, and freeware chapter, atwww.enemytechnology.com.

In this world, you take the role of a general officer, which is typical for this style of game. You’re a combat leader of the Lokob, an alien race that’s headed for the Apocalypse…right now…at the hands of the Unath. The Unath are your all-purpose Enemy, bent on dominating the galaxy, and you’re standing in their way. Making things even worse is that the Unath are evidently mining some sort of chemical they need to go on with their evil plots from the very bodies of your people. You’re in a fight to the literal death.You have two less-than-willing allies, these being the technologically superior Y’dray, and the tough, infantry-oriented Rag’ha. Your victories are the only thing holding this fragile alliance together.

I of the Enemy’s first chapter, Ril’Cerat, takes place at the beginning of the Lokob-Unath war. The setting is at the end of the peace, when the Unath are caught setting up bases on Ril’Cerat, a planet that is the gateway to the Lokob homeworld. By foresight, you have seen this celestial Pearl Harbor in the making and have against orders garrisoned Ril’Cerath with a makeshift force of Rag’ha mercenaries and Lokob cannon-walkers, and you’ve got to stem the tide of the attack. Your supply-lines are stretched thin, and it is Y’dray warp technology that keeps them open. Your task is to evict the Unath from Ril’Cerat before the Y’dray back out of the Alliance and you lose your technological edge with them. It is the Y’dray that bring aircraft-both fighters and transports-to the mix. You can’t win without them.

I of the Enemy: Ril’Cerat Page 2

I of the Enemy: Ril’Cerat Page 3

I of the Enemy: Ril’Cerat Page 4