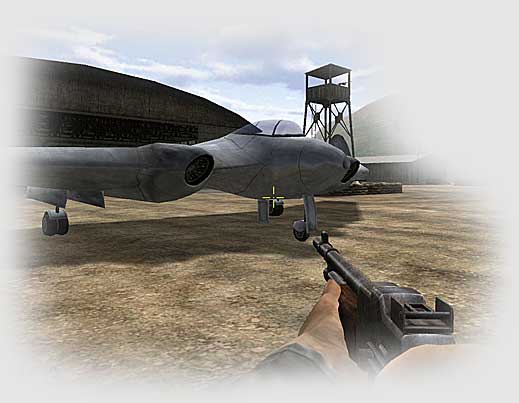 Most anyone who has heard of the Battlefield 1942 game and its first expansion, Road to Rome, knows what to expect in Secret Weapons of WWII as far as the general gameplay is concerned, so I won’t go into much detail about it. I myself followed the progress of the game religiously in my dreams of online glory from the first time PC Gamer magazine wrote of the project. Unfortunately, due to a sadly under-funded and -powered machine and lack of any Internet connection beyond an intermittent 56k (due to certain Real Life issues…you know the drill) my dreams were to be largely unrealized. But that hasn’t stopped me from trying to enjoy the game offline, that is when I can get my computer running hot, straight and normal.

Because of the very nature of the Battlefield 1942 series, both mid- to high-end machines and broadband Internet connections are essential to getting the full gambit of what this game has to offer. 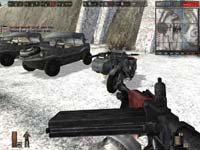 Besides the features already known to the BF’42 series, this new expansion also boasts:

Several new maps: including the Battle of Britain map (in the update to BF42 v1.45), the Eagle’s Nest, the Gothic Line and Essen. Several new vehicles: including German, US, and English jets (the Horten 229 [sic], the Goblin fighter, Sturmtiger, and motorcycles for both Allied and Axis forces. New weapons, including the revolutionary FG42 paratrooper assault rifle, and the Bren light-machine gun.

Like the Road to Rome expansion, the regular Battlefield 1942 maps are available along with the new ones for Secret Weapons.

The focus on the new maps is, of course, on Germany’s secret weapons projects, and with the exception of the Gothic Line map, all battles take place around semi-historical secret facilities. Of course, it doesn’t necessarily follow that the maps are historically accurate, but they are well-designed and offer plenty of space for multiplayer ground battles of up to 64 players. Buildings on the maps are also a little more complicated, with multiple levels, cramped stairwells, and multiple access points. There are also plenty of opportunities for setting up an ambush.

The maps themselves have several routes of possible advance each. Though on many of the maps the control points form an obvious path of advancement, players are by no means limited to it. One of my favorite tactics in single-player battles that might also work in online games is to sneak, either as an Assault or Medic class, into the rearmost enemy control point that can be taken. Once the objective has been secured (hopefully there were only a few enemy soldiers there at most) your guys can spawn there and attack from both directions. If your buddies are smart, they’ll soon start appearing, but while waiting you can commandeer any enemy tanks or vehicles and proceed to wreak havoc. Winning battles in this manner is what gets you medals in single player; but even if your side loses, the game rewards you for your attempted efforts. This adds a nice little touch to the immersion, in my opinion. 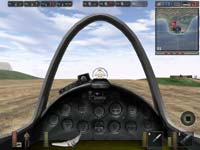 Use of the planes in Secret Weapons is little different then in the original game, however the increased speed of the jet and rocket planes makes maneuvering within the confines of the battlefield exceedingly tough without incurring the wrath of the Provost Marshall (“you are leaving the battle — deserters will be shot!”). Some of the maps, like the Telemark Research Facility and Helendoorn V2 base, are almost ridiculously tight for flying with the jets. Even with the regular prop planes, the limitations have been a bit too restrictive on the other maps in the series.

In my heart, I am a flight-simmer, but I’m not so hard-core that I would object to an arcade-like flight model; it would even be a stretch to say that the aircraft of the Battlefield series even have distinctive flight models beyond the differences between propulsions. I love flying the planes in the game, but in my opinion the maps are too small and the planes go too fast to make it effective. It would be better, in my opinion, to remove the restrictions for airplanes that soldiers on the ground have to keep them in the battle. 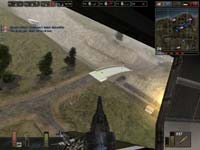 On the other hand, being a gunner on a bomber is totally different. Just let an AI bot take the controls and have a blast swatting down the enemy fighters that buzz at you. In the Battle of Britain map, I was able to help the Germans win by just being a gunner in a Ju-88. What is even more fun is, if you’re shot down over England, you can sabotage the English efforts to resist the Germans. Though you can’t destroy the radar installations as a ground-pounder, you can wreak havoc with the English airbases and flak guns. The Scout class works well for AAA suppression from the ground, but Anti-tank is also fun. Try lobbing a rocket at a Spitfire as it takes off, then retreat and wait… If you’re killed, simply respawn and enter another bomber. If you are a Brit, you can still do this, but it is harder to make a difference. 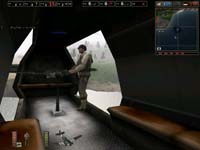 The Battlefield 1942 series is by no means a simulation, but it does offer a lot of fun when you have a lot of buddies online to fight with and against. The bot AI is clever and will kill you smartly, but there are a few issues I have seen with them. One is, of course, the Anti-tank bot and his sniping bazooka. It’s a good thing that you can see the rounds coming with ample time to dodge, but if you’re not careful the little blighters will sneak on your flank and rocket-snipe you from the side… This is doubly annoying since whenever you try to do the same to the AI bots, they always seem to live through it…but that might just be my poor aim due to a slow PC (yeah, right, any excuse will do for me).

Another weird bug occurs when an AI bot gets “lost” or “forgotten”. For example, on one map I saw this American soldier just sitting in a German position (then held by me – and the Germans) not doing anything. I walked up to him and promptly shot him with my pistol since I had ran out of bazooka rounds. But since the pistol won’t kill with one shot, it was strange that he didn’t resist. But it could have been the difficulty lever I had on, I’ve also noticed that at the level I had set, the reaction time of the enemy bots as a whole is a little slow. I’m not complaining though, because since my PC is quite slow it tends to hamper my own reactions through quite a few timely pauses.

On a side note, I’ve actually had a neat little idea for a mini-game that you can pull off in multiplayer servers if you have buddies who are in on the idea. I kind of got the idea of this from hearing about virtual air-races using the flight simulation IL-2 Sturmovik: Forgotten Battles. It goes like this: You take however many guys that want to join, choose a vehicle-set and a map, and have a race around a previously-agreed-upon course on that map!

Here’s an example using the included Battle of Britain map, and for the purpose of argument, say all of the participants are in British uniforms. Also we’ll assume that the Jeep will be the vehicle of choice (planes would not do in this case), and the course will take you from the British main spawning point to touch all of the radar installations and back around on the roads to the main spawn point. You can do multiple laps, a Survival/Last Man Standing, or stopwatch…the possibilities are endless, and you aren’t limited to one set of vehicles; the race could be Schwimwagens versus Jeeps, or Shermans versus Panzer IVs (no shooting, of course). Oh, and if you chaps happen to like the idea…well, credit where credit it due…;o)