On December 8th, I had the fantastic opportunity to travel to EA’s offices in Redwood City in California to get a hands-on preview of their newest Battlefield series simulation,Battlefield Vietnam (BFV).

Previously, Battlefield 1942 was just a single game but it is clear that EA intends to make “Battlefield” a series of games. Their newest arena is the jungle of Vietnam.

Beyond the surface, there is some question as to whether Vietnam makes the best choice for a conflict. Some feel it is a sore that has yet to completely heal. EA is hoping gamers can distinguish game from reality just enough to play the game without reliving potential old wounds. I’m not from the Vietnam era so playing the game was a huge treat for me and I’m betting the Vietnam angle won’t be a hang-up for the vast majority of gamers.

The first thing to notice about BFV is the graphics. EA took precious time to strip out the old DX8 code and implement DX9 programming and the difference is quite apparent. Images are sharper and clearer with details well beyond BF1942.

Going to DX9 has allowed EA to bring home the “feel” of Vietnam. In BF 1942, there was open land, deserts and some trees. Vietnam is filled with small rivers, lush bushes and swamp with a great deal of greenery described by the EA development team as “overgrowth and undergrowth”.

Increased image quality often means slower performance. The Producer at EA assured us that this would not be the case. More efficient code means better performance he commented. From my limited playtime, it seems clear to me that BFV will clearly be a CPU limited game just like BF1942.

Sounds are an increased focus for this series. They want gamers to really experience all the sights and sounds of Vietnam. Clearly, they did a great deal of work on sounds and it showed. Sounds are going to play an increased role in the totality of playing BFV. A 60’s soundtrack will accompany the game so you have music that fits the era. 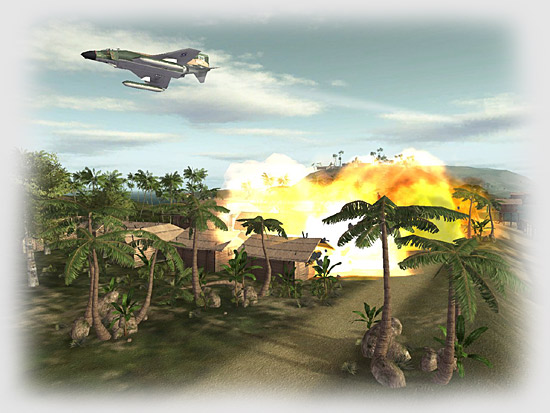