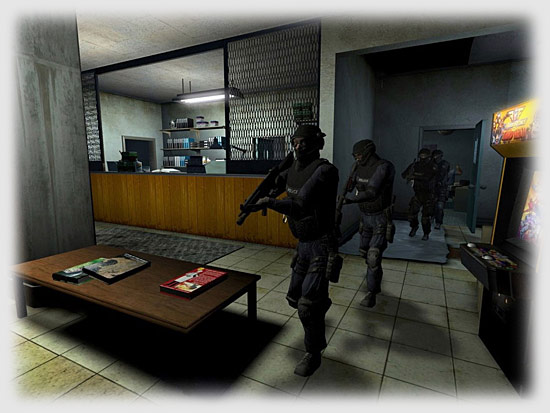 SWAT 4 gives you a choice in the options to pick either the classic SWAT 3 style command interface or the recommended new overlay command structure. It appears to work similar to the Raven Shield series of games. You place your cursor over an item, say for an example a door, you then right click your mouse and an overlay with different commands pop up, you then left click on your order and the element responds. What seems great about this is that there will be different options based on what you’re looking at. Say for instance if you right click over the door lock, you’ll get a menu with an option to pick lock, along with others. If you right click at the base of a door, you’ll have the option to order your officer to use the optic-wand. You can also turn on a small window, like in SWAT 3, and see whatever your officer sees and issue commands from within.

One cool new feature is a sniper mode, you will have snipers in some of the missions and they will be placed tactically. You can open a window to see what the sniper sees, and then switch to the sniper to take the all important shot yourself. If what I read was correct, that’s the only way your sniper will engage, if you take control, the AI will not engage on it’s own but just call out what he sees. 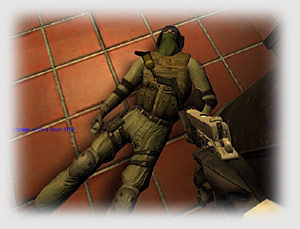 them then the SWAT 3 locations. Irrational Games wanted to show you the true, darker side of the crime world, and I for one like the ideas. You’ll go after hardcore criminals in some of the darkest areas. While doing your mission you will feel more involved in the situation then ever before. Weapon ballistics and environment ballistics are modeled and real as can be. You can shoot lights, windows, glasses, and other items within the environment. There are different choices of ammo you can pick and load, and each ballistics have been modeled. Some will go through plywood and some won’t. Some will travel through two bodies and some only one, which I discovered in the beta when I shot a bad guy and the round went through taking out the VIP I was suppose to be rescuing.