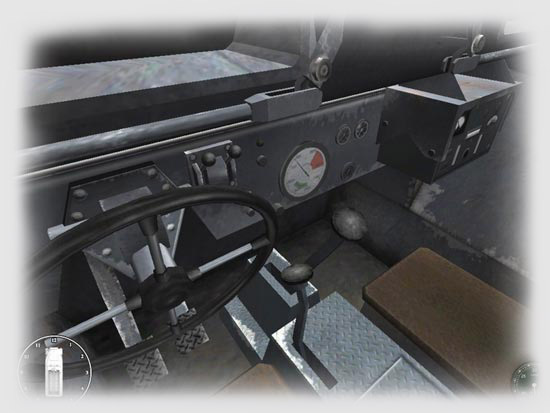 RO lays the foundation for the ground-part of a full-on battlefield. It’s greatly reminiscent of Operation Flashpoint in one central regard: vehicles. I’m playing the 3.1 version here, and in it you can drive trucks, crew half-tracks, and even tanks! The T-34 and German Panzer IV are in the game, among other vehicles. Look at the shots of the interiors. The green one is the driver’s position of a T-34 tank. The more detailed one is a German SdKfz half-track, and in the half-track you can pan with the mouse to see out of the side windows as well as the windshield! And then your pal can get in the back and man the heavy machine gun the ‘track carries for even more mayhem… unless the enemy’s got hold of certain antitank rockets, or can get close enough to toss in an F1 hand-grenade. In the release that is about to come out, you can even get access to the Stalin II heavy tank in some maps! Cooperation is important in driving the vehicles. You can’t do a tank all alone. You need a crew-in the T-34/76, two others beside yourself. And where you end up in the tank depends on the role you’re playing in the game. You can’t drive vehicles you aren’t qualified for! See what happens when a sniper tries to take over a Panzer? 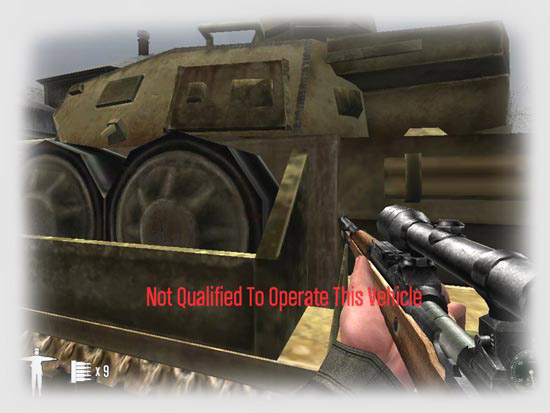 You get the “not qualified” message. You have to be conscious of who you are on the battlefield. And that goes for whether you’re a grunt (be it Soviet or Heer) or a unit commander. Commanders get great things like binoculars and the ability to call for artillery. Now, the vehicles are pretty primitively modeled in their operation. Inside the T-34, you get in the driver’s seat and push the forward button, and away you go. Also, armor and penetration values are pretty minimalist, and the main gun ballistics are basically a good guess. Mostly, this is because the vehicles are still a work in progress, having been introduced only one RO version ago. As the team has time to introduce new features, this will improve.

One neat thing I discovered is that practice mode within the UT framework and actual online games aren’t too different from the player’s perspective. Once I resolved some connectivity issues and managed to get into the usually swamped UT master server, I was able to find several Red Orchestra multiplay servers across the world. Most of the players I ran into online are friendly and are into the roles they play, and you don’t usually find the cheating and team-killing problems that plague games like America’s Army in RO servers. I joined two in-progress games, both as simple Heer grunts, toting a 98 Mauser or MP-40. I found that with a good connection, lag issues aren’t as prevalent as I have found in flight sims such as IL-2. Chat is in the interface and it’s well designed. The only problem I had was the fact that I got killed, a lot, and always by unseen enemies.