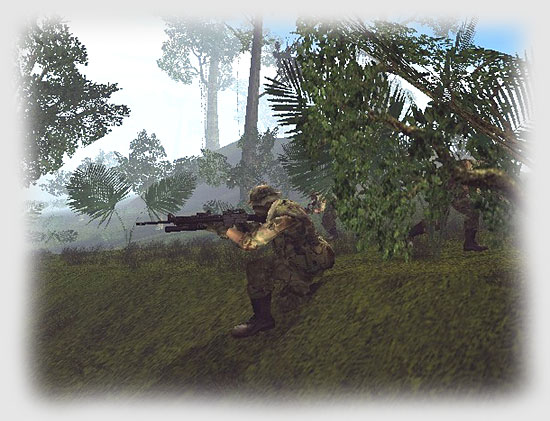 In Ghost Recon, you had a single player campaign with 15 missions in it. You could be assigned to take out an enemy force, or blow up a bridge, or take out some armor. Some missions required you to rescue hostages and fellow soldiers/airmen. After completing a mission, whether in single player or online, you could save that track and watch a replay of the complete missions switching between your troops; it was great for learning, after action reviews, and making movies.

Ghost Recon did so well that they released two official add-ons. One was Desert Siege which added an eight mission campaign, new maps, new weapons, and a new game mode. It was based in East Africa where the ghosts were dispatched to defuse a civil war to help protect shipping lanes in the Red Sea.

Then came Island Thunder which added another eight mission campaign, and even more maps, and more weapons. This add-on was based in post-Castro Cuba, where the ghosts were responsible for preventing a drug lord from taking power, over free elections.

These three games, the original Ghost Recon, and the two add-ons Desert Siege and Island Thunder, can be bought in a gold package for fewer than S20 USD. If you never have tried these games, don’t pass them up, there doesn’t seem to be another like it coming — as I will explain a little later.

As if all those missions, weapons, and characters weren’t enough, Ghost Recon is one of the most modded PC games out there. I could never list all the mods, missions, or total conversions, but will highlight a few that I personally have played.