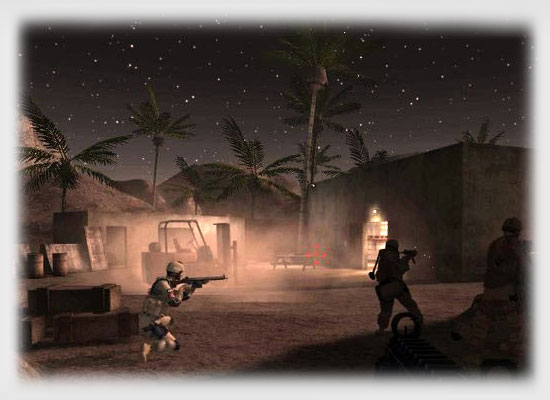 Oh how I remember the series well. I’ve been a fan of Tom Clancy’s work for a long time. It started with his excellent novels, for which I have read them all, (and even have two of his classics on my iPod as audio books). Then came the movies, which were great but never as good as the books — which seems to be a typical opinion about movies made from books anyway.

Finally, there was the first Rainbow Six computer game. That was the game that truly got me into online cooperative play. I met members of my longtime gaming group, the “Military Gaming Group” playing it, and to this day we still play a game from the series now and then, and always look forward to the next version released.

Tom Clancy has since given up the total control he had over his name and on these games. He use to demand approval on any and all elements of a game. Not so anymore. Ubisoft has bought the rights to the game and the rights to his great name. In the age of consoles, a number of us were very concerned about the direction the Rainbow Six series would take, especially since the console versions were selling like crazy.

Then I started reading news and interviews that the PC version was getting extra attention and time to take it back from the console direction and put it on the right track for the PC release. My interest peaked and I was hopeful again. Then about a month before retail, Ubisoft released a demo for Lockdown, and it meet with a lot a negative remarks and comments throughout the gaming communities. My interest fell flat again.

Then I heard rumors that Lockdown would be delayed till the end of the year. I assumed because the developers realized how terrible the demo was and that the game was not ready to be released. I was pleased again. Then out of the blue and a shock to me, I found that Lockdown had in fact been released to retail. I wondered how many people would buy it. Did Ubisoft shoot themselves in the foot by releasing a demo that was considered terrible, then the game a week or so later?

What is to happen to one of the greatest computer game series in history?

You can go to your local computer store and purchase Rainbow Six: Lockdown in box form. In that box will be 5 CD-ROM disks, a 20 page manual, and a key code. (Thanks “Positive G” for that information.)

I elected to use a download service I had previously used to purchase a couple of games. Games I wanted to try, but felt I wouldn’t be keeping for years to come like GUN and F.E.A.R. This service is a subset of Fileplanet called Direct2Drive. I purchased my version of Lockdown as a digital download. This is really a great service if you have a broadband connection. I had to download a part one and a part two, each around 2 gigs each. I had the game downloaded in about an hour.

I still do wonder why I have to pay 50 US dollars, compared to the 40 US dollars that is advertised in stores for the same game, when I’m not getting the extras like a case, CD’s, or a printed manual.

To install, simply extract both downloaded files into the same folder, and double-click the setup icon. I had no problems with the install procedure. So now I don’t need a disk, which is another bonus for digital downloads.

I exited the setup and rebooted my computer. Nowadays you don’t have to reboot, but it is still a good idea after a new install of anything.

I started the game and after watching the small introduction, I was on the main menu. Which is nicely laid out and easy to understand and read.

I should point out here that Lockdown is one of the many games using the Starforce protection scheme. I haven’t had any problems with Starforce in the past, and never had any during my playing, and testing of Lockdown.

You have your typical options menu which has tabs at the top to adjust your video, audio, game play, and controls. All are nicely laid out and easy to use and adjust. Click save, and then back to the main menu.

On the main menu you have a choice of single player and multiplayer, clicking on each of these brings you to the respected menu. More will be covered in the individual sections. You also have the choice of activating mods, which will surely come out later, but none at this moment.