For all you aspiring tankers out there, we’re going to peel back the covers and take a look at the two main players in SB Pro PE. Though this simulation has many crewable vehicles, including armored personnel carriers and infantry fighting vehicles, the bottom line here is full-on armored power, the great-grandchildren ofWehrmacht General Heinz Guderian’s World War II Blitzkrieg.

Guderian would have marveled at tanks like the two stars of the Steel Beasts Pro PE show. America’s M-1 Abrams tank and Germany’s Leopard are state of the modern art. Of all the tanks built in the world, these two stand head and shoulders above the rest, with only the British Challenger and the Israeli Merkava tanks even remotely in their league. On the Soviet side of the equation, the later T-80 and T-90 tanks are the closest thing to these battlefield powerhouses. Combat proven and time tested, the Leopard and Abrams are rightfully seen as legends in their own time.

In 1973, the Yom Kippur War saw Israeli tank crews driving US-built M-48 and M-60, and British Centurion main battle tanks taking on the Soviet T-55 and T-62 series, at that time along with the T-64 some of the best tanks in service worldwide. U.S. armor generals, from their headquarters at the Armor School in Ft. Knox, Kentucky, were carefully watching their counterparts fight the land war in the Middle East. They learned a lot of lessons there, and building these upon combat performance of South Vietnamese M-48 tanks in the Nguyen Hue offensive the previous year, a picture they didn’t like was being painted. Soviet tanks both in North Vietnamese hands and in Arab hands showed dangerous lethality against contemporary Western designs. Twentieth Tanks, the specialist ARVN unit with U.S. advisors operating in I Corps during the Year of the Rat, managed 2000 meter kills of T-54 tanks manned by NVA crews, but the NVA sported many more of those vehicles and had it not been for U.S. air superiority, the war there would have ended three years earlier than it ultimately did. And in the desert, Israeli crews were seeing a dangerous parity between their tanks and Arab-operated T-62 tanks. Everyone wanted to upgrade from these lessons.

In Israel, of course, the lessons learned produced the Merkava, acclaimed as one of the best designs fighting today. In America, the advent in the late 1970s of AirLand Battle doctrine, American’s version of the all-armsBlitzkrieg pioneered by Guderian, placed a technically-superior U.S., British and West German force defending Europe against a quantitatively superior Soviet foe, and the fact that Russian tanks were not far behind equivalent U.S. designs spurred design studies into the tank of the future, one with the ability to survive the threats present on the modern battlefield, to maneuver and dominate its foe, sort of the F-22 Raptor of tanks. The Detroit Diesel/Allison Division of General Motors, creator of the failed MBT-70 project of the 1960s, and the Chrysler Corporation, designer of the M-60, faced off in competition. Chrysler won the battle with a revolutionary concept, the M1. Powered by a Lycoming AGT-1500 multifuel, gas turbine engine designed for use in helicopters, the design incorporated priorities of crew survivability by enhanced composite armor, state of the art targeting systems including thermal imaging, speed and maneuverability, and operational flexibility. The M1 tanks can run at 60 miles per hour on a hard surface for extended periods, and can turn in its own length, and can accelerate from 0 to 20 miles per hour in six seconds. The engine and transmission can be pulled out and replaced in under one hour, and the tank can operate on kerosene, all types of jet fuel, diesel, or even aviation or motor gasoline in a pinch. Cost savings were achieved by retaining the M-60’s M68A1 105mm fully rifled gun, firing a newly-developed M855 depleted-uranium kinetic energy penetrator round. The M1 went into series production in 1979. 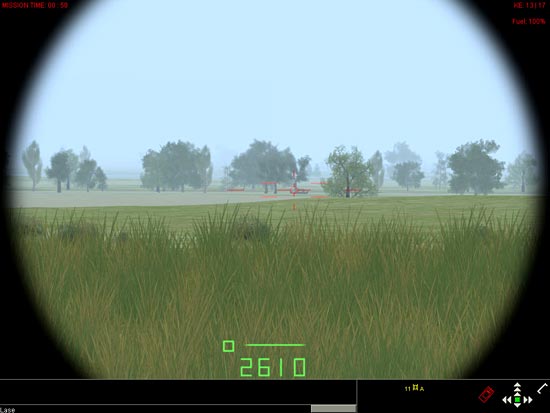 By 1988, the first real series upgrade was in full swing, and this is the one and only American tank you’ll see inSB Pro PE. It is the M1A1 (HA), the HA standing for “Heavy Armor.” The original M1 carried a revolution in protection, the still-classified British-developed “Chobham” armor, a steel-ceramic composite sandwich with greatly enhanced protection against both kinetic punch weapons and chemical burn-through weapons such as HEAT rounds. The older version of this was in service on early M1A1 tanks that saw service in the first Gulf War, and proved proof against Iraqi T-72 export-model tanks’ main gun. What you’ll see is the (HA) variant, the 1992 upgrade to this armoring scheme, which adds a layer of depleted uranium to protect even more. One of the densest metals around, uranium affords even more protection to the M1A1’s “Chobham” armor scheme.  The M1A1 also has improved suspension, transmission modifications, and a changed gun mounting, as well as the addition of an M-60 like turret bustle rack for the crew to be able to stow equipment.

The greatest improvement to the M1A1 came from Germany, however, in the form of Rheinmetall AG’s 120mm L44 smoothbore cannon, identical to that arming Germany’s Leopard 2. With its improved thermal sights, this dangerous weapon is designated M256 in U.S. service. Its most-known ammunition is the “sabot” round, taken from the Dutch word for “shoe.” This is a rod, made of tungsten in German service, and depleted uranium in American service. In U.S. service, the M829A1 sabot round is known as APFSDS-T, for armor piercing, fin-stabilized, discarding sabot tracer. When fired, the sabot, a two-piece cylinder carrying a stubby, finned metal dart, breaks apart on leaving the barrel and allowing the dart to fly downrange into the target. This is a “kinetic,” or energy penetrator, which relies on speed to do its damage. When striking enemy armor, the dart and the armor partially liquefy from the great heat of the contact, the projectile melting its way into the crew compartment of the enemy vehicle and using the shock and pressure wave of concussion, along with fragmentation, known as “spall,” from the enemy vehicle’s damaged skin, to cause damage. M1 crews routinely reported T-72 turrets flying off from sabot hits in the first Gulf War. The M829A1 round can penetrate over 600mm equivalent of armor at 2000 meters. The M1A1’s turret, weighing in at over 26 tons, can nevertheless rotate 360 degrees in seven seconds, considerably faster than equivalent tanks of other nations.

The U.S. Army admits that the L44/M256 gun has a maximum effective range of 3500 meters, but it is well known that American tankers have engaged at over 4000 meters distance and achieved kills, a twofold increase over the then-devastating performance of South Vietnamese elite tankers firing the M48’s 90mm gun against North Vietnamese T-54s at Dong Ha in 1972. The M256 gun has a muzzle velocity of 1,626 meters per second, and fires several types of ammunition other than the M826A1 round, including the M830 High-Explosive Anti Tank (HEAT) chemical penetrator, which is capable of engaging at up to 3000 meters. HEAT rounds employ explosive force, on contact a jet of superheated gas to blowtorch its way through enemy armor. U.S. tankers operating in Iraq today have the advantage of the next generation sabot round, the M829A2, with an upgraded uranium penetrator and 1,776 m/sec muzzle velocity, with correspondingly higher penetration. Another version of the M829 round is currently in development. These rounds are designed to match Russian development of reactive armors such as the Kontakt and Kaktus types, projected for the latest generation of the T-80 and T-90 tanks.