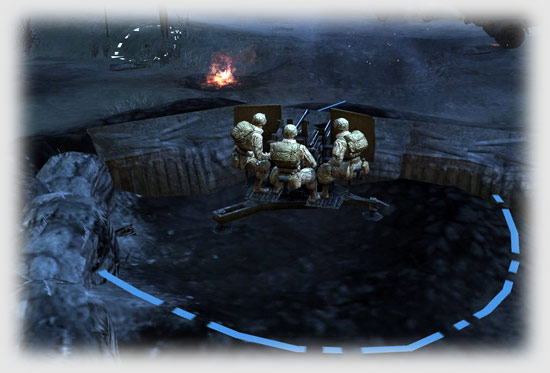 It’s a big surprise finding myself reviewing Company of Heroes. You see, I am not a big fan of RTS games. They’re good — I like the idea of the game genre — but always found RTS games too tedious for me. I can’t think or click as fast as they want me too. When I play others online, I find that just when I finish building up my defenses on my home base, my opponents usually have 3/4th of the map conquered, and usually 2 or more huge armies knocking on the door of my “just built” defense. I have tried a few RTS’s and had fun with them: Rise of Nations, Lord of the Rings, and Generals. But I don’t think I’ve ever completed a single player campaign in a RTS, and maybe only won 1 out of 10 online matches with those games. I tell you this, because I want you to know where I’m coming from before starting the Company of Heroes review.

I first heard great things about the Company of Heroes RTS game demo when it was released. Downloaded it, and played it, was very impressed and put it on my “to consider” list. Then when the full game came out, praise was spreading like wild fire across the different game forums that I visit. A few online reviews were giving it high marks, so I took it off my “to consider” list and put it on my “gotta get” game list.

Now, as you can probably tell, I wouldn’t really be reviewing this game if I didn’t like it or weren’t playing it, but after every single sit down with this game, I get up from my chair saying “WOW, that was incredible… I’ve got to share the news of this game”, so there you have it. I love this game. To keep it honest and to be a good reviewer, I will force myself to mention the negatives of the game. But the positives in this game outweigh the negatives by a huge margin. So here it is, my review of a game genre I dislike — but a game I love: Company of Heroes from Relic, published by THQ.

I was actually picking up NHL 2007 for my Xbox 360 at the local computer game store, when I saw a poster for Company of Heroes on the PC. On the poster it said, “available now”, so I looked in the small one shelf area of PC games in the whole store and didn’t see it. I thought, “Great, the one copy they received probably is sold already”. (The standard for retail PC games now-a-days, but I’ll stay off that soap box for now.)

In the Collectors Edition, which comes in a tin metal case is the DVD with the game, and a CD-ROM with extra media like “the making of”. You also get a typical 32-page manual that covers what you need to know. The serial key is on the back along with a quick reference chart. In the Collectors Edition you also get a few goodies: a Camouflage and Cover pamphlet that really shows nothing in relation to the game. You get a nice fold out map with the D-day landing locations and units involved. It’s nice for history buffs and History Channel watchers (like me!) and finally, you get a small deck of cards with a few units like the half-track, or the Sherman tank. Nice package, but not really worth the extra 20 bucks. In my opinion, we should not have to pay extra for DVD over CD-ROMs.