Welcome to the first in a series of articles discussing different aspects of squad and team level virtual combat. All of this information is taken from real world sources and modified for gaming purposes.

In this briefing we will be discussing the squad and fire team elements, and what each team member’s job and / or purpose is. The first thing we need to cover is a few definitions.

A soldier is a person who has enlisted with, or has been conscripted into, the armed forces of a country. The term soldier is usually limited to people who serve in the army. Groups of soldiers are usually divided into military units, which are organized in a strictly hierarchical fashion. A soldier would be considered one individual, the lowest on the list of military unit structure.

A fire team is a military unit consisting of usually four soldiers. In the US Army for example, a fire team would consist of a fire team leader, a grenadier, a machine gunner, and a rifleman. Often the rifleman would be tasked with a missile system, giving the fire team anti-armor capabilities. The fire team is the building block of any infantry unit, and is the smallest team element that can deploy independently. 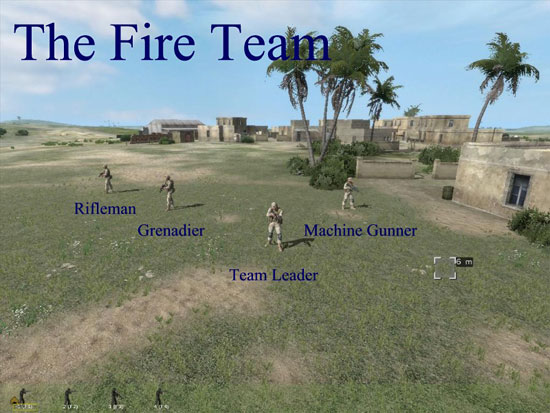 In today’s US Army, a squad is a military unit consisting of approximately nine soldiers. The squad usually consists of two fire teams and a squad leader. Not too long ago the US Army had a twelve man squad consisting of three fire teams of four soldiers each. The nine-man squad has become standard due to the proliferation of armed infantry fighting vehicles, apparently all of which have a capacity of nine personal. This is true for even light infantry units. 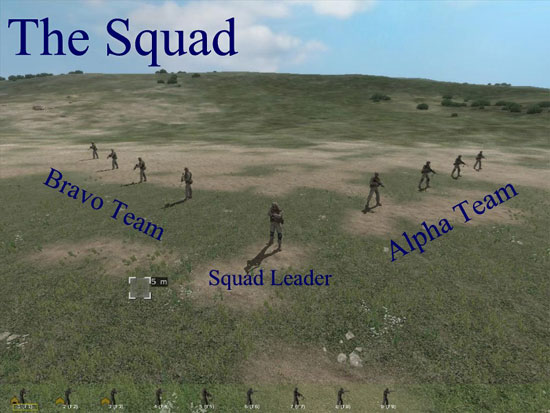 How This Pertains To Computer Gaming

What you basically need to know is that everything usually evolves around the fire team. Each fire team is comprised of the right mix of weapon systems, making the fire team one mean lean fighting machine. The best set up to have in-game is two fire teams, and a squad leader running the show. If you’re lucky enough to have players for three or more fire teams, all the better. It just starts getting a little more hectic for the squad leader with more fire teams.

If you have 9 people playing a tactical shooter then you have a squad. One person should be elected squad leader before the mission starts, and the other players divided into two or more fire teams. Each fire team is assigned a letter for easy use especially under virtual combat.

These designations are usually Alpha, Bravo, Charlie, and Delta. (If you have a sniper team or two, they are usually designated as Sierra 1 and Sierra 2, and so on.)

The squad leader gives the fire team orders, while a fire team leader controls his team to accomplish the mission.

In future tactical briefs most of the information will be based on a squad with a leader and two or three fire teams. This is important to understand especially later when we move into assault and defensive small unit tactics.