The graphics and sounds of Vegas 2 are just a notch or two above the first one. The graphics in the SP campaign are very nice, but once you go online the graphic textures are reduced to make for better and smoother game play. The maps are bigger than the maps in CoD4, but I can’t understand why Vegas 2 graphics are so sub-par too Call of Duty 4s graphics. Yes I know there are two different engines at work here (Vegas 2 uses the completed Unreal 3 engine, while Vegas 1 used the “work in progress” Unreal 3 engine.) but still CoD4s maps are just so much more detailed and busy. 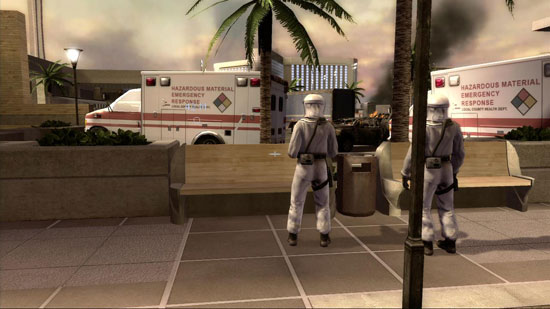 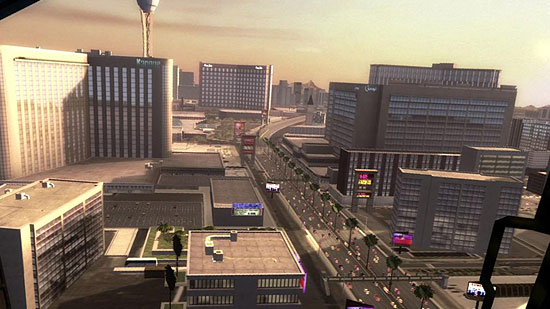 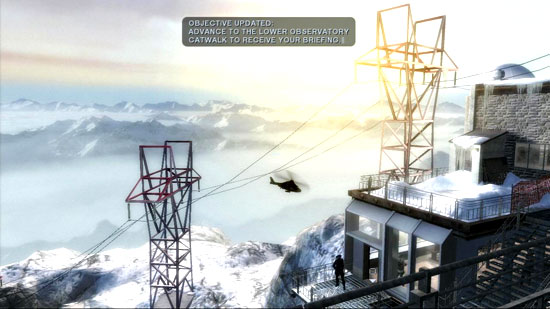 I mentioned earlier that there were at least 3 scenes in the SP story campaign that brought my Xbox 360 to its knees. The frame rate seemed to drop to the single digits. I was not aware that could be done on a console/TV system. But for the most part it was smooth and clear.

Sound is incredible, weapons, effects, environment, and teammates are all done very well. The Tom Clancy series has always been top notch when it comes to audio in their games and Vegas 2 is no exception.

Rainbow Six: Vegas 2 (just like the first Vegas) is rated M for mature. I can see why. Well, really hear why in game. The terrorists use some very harsh and unkindly phrases in game, and likes to use a lot of swear words to get there points across that they just don’t like you. The language in-game is really bad, and a little over the top at times. I’m not asking for nice terrorists or polite terrorists, but does every other word need to be the F word? But I digress, the sounds in the games are incredible, and the language is mature and real… to a point. 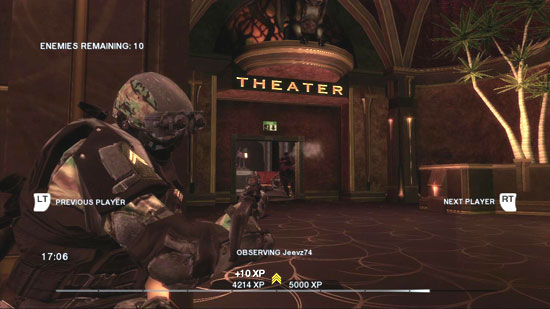 Vegas 2 is a tactical shooter, it is not meant to be played like a run and gun type game. The best way to play Vegas 2 is from cover-to-cover, using a bounding over watch maneuver. Vegas 2 does this well, you order your two man AI team to a position of cover, and make sure you have your Rules of Engagement (ROE) set to assault. You can have it set to either assault or recon, in case you prefer to sneak up on an enemy or location. Once your team is in a cover position, you then leap frog in front of your team and take a new position of cover, then repeat.

When your teammates get enemy contact, be sure to allow them to engage at will via the ROE assault setting. You can then usually take this opportunity to flank the enemy being engaged by your teammates for some easy, CQB kills.

Vegas 2 is designed with this type of tactical game play in mind and works well. New to Vegas 2 is bullet penetration so you need to make sure you order your team behind solid cover, or put yourself behind solid cover. You can be shot through weak cover, but so can the enemy.

You also have a full screen map showing you the layout of the map your own, your teammates and any enemies if you know they are there.

You can either use your own grenades, smoke, or flash bangs to provide concealment or to blind or kill the enemies, or you can order your AI teammates to deploy what they have. Don’t be afraid to use these items. The game is designed for these tools to be used in a proper manner.

During the story mode, you have refill stations that are plentiful, make sure you do just that whenever you see one. Of course, you can always pick-up a dropped enemy weapon if you feel the need.

You’ll notice there are always two ammo re-supply boxes, ever wonder why? It’s for your partner when you play the story in co-op mode. Nicely done Ubisoft.

As I mentioned earlier the friendly AI is good but can become idiots in certain situations. For the most part of the game they did well, but there was an occasional incident where either they got themselves stuck behind something, or that they totally ignored a high priority threat while clearing a room, and even once or twice threw a fragmentation grenade at the door frame, killing us all. It is doable, but all games need some serious AI work in my opinion.

The enemy AI does seem to be more aggressive then the first Vegas. There were many games where my team never had to leave the general area in terrorist hunt, because the enemy came to us, sometimes in a huge, overwhelming force. Sometimes on a flank. They threw flash bangs and smoke, and then came in for the kill. Not always but a few times at least. It definitely made the game harder, but when we were just trying to check out the new maps it made it kind of hard to explore.

Still the enemy AI keeps you on your toes and makes the game more fun and completion more of an achievement.