John Sonedecker came up with that motto on a plane trip coming home from a possible publisher for his new sim. Too many games made and released nowadays have seemed to forget what a tactical shooter is, or should be. It is great to hear a developer think and talk like this. What it says to me is that John’s team at BlackFoot Studios is building this game for me, and my group of tactical players, and not focused on appeasing the money counters.

What Do You Want, What Do I Want

So what would you say to a computer game, or even a next generation console game, that took the old school tactical game play of yesteryear, like the original Rainbow Six or Ghost Recon games, but used today’s graphics and audio along with the proper hardware to enhance the experience? If you’re anything like me you love the look and sound of today’s games, but miss the true tactical aspect of the games that introduced us to today’s “action shooters”.

I have some good news for you. Along comes a company, already experienced in the art and sound of tactical shooters, forming their own company called BlackFoot Studios. Their first game is a hardcore tactical shooter with the gameplay of yesteryear mixed in with the sights and sounds of today. The name of this first game is “Ground Branch”. No doubt the first thing you’re wondering is, “what the heck does Ground Branch mean anyway?”

Ground Branch is a real subsection of the special activities division of the CIA. It is the paramilitary wing of the CIA. Ground Branch is composed of some of the best Special Forces units in the world. Ground Branch often goes into a situation before any other unit including US Army Special Forces or U.S. Navy SEALs. They are not a direct combat type of organization — more like a hit-and-run force. They have the latest and greatest real world weapons, equipment and technology. Ground Branch also has more freedom in what they do. They get a mission, and sometimes work outside of military laws and rules. They are “gun slingers” for the modern age, and some of their behavior and action could be deemed questionable by conventional means. 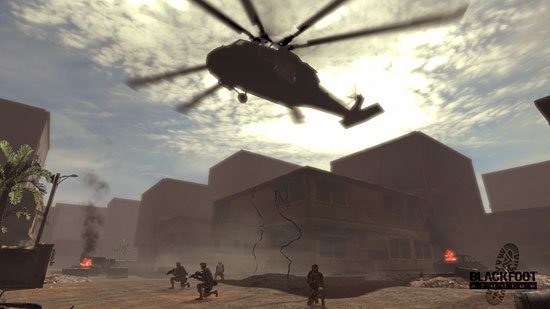 BlackFoot Studios — also known as BFS — was founded in 2004 by John Sonedecker. Known throughout the tactical combat industry as the visionary lead level designer for such groundbreaking games as Ghost Recon and Rainbow Six, Sonedecker brings years of experience in designing several of the gaming industry’s most successful franchises. With an impressive resume including lead roles with Red Storm Entertainment and BattleBorne Entertainment, John provides BlackFoot Studios with a solid backbone of developmental knowledge and experience, and most importantly, his unique vision.

BFS is a young, small studio, but it’s filled with an extremely talented and driven team of artists and designers with a unique goal — to fill the void of what many, myself included, called “classic tactical” games. BlackFoot’s goal is to create the best, most realistic squad tactical shooter with emphasis on the realistic and tactical. Their mission statement “to be the absolute best in squad-based tactical gaming”, is surely within reach considering both the talents of the team, and the very specific principals in game design Sonedecker vows to uphold.