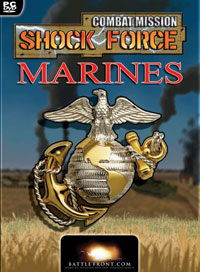 This is not a review of the game or module, more of a “what is it?”, “what does it contain?” and a first look, first impressions, at the gameplay.

Battlefront, a year or two ago, released Combat Mission Shock Force. An updated and modern version of their classic WW2 Combat Mission series of games. CMSF was set in modern times, with modern equipment, and modern tactics. It was released in less then par fashion. A large number of bugs, tech issues, and gameplay issues, along with the fact that most machines, no matter how good, couldn’t play the game in more than single digit frame rates. Battlefront eventually fixed the majority of the problems, and finally had a game in a playable state.

Well fast forward to September 2008, Battlefront has now released the Marines add-on, (they like to call it module, because it is said there will be more of them). And quite frankly, this game with this add-on is what Combat Mission Shock Force should have been way back when. This is now a great game, still not a classic like the others in my opinion, but a great game and worth the purchase.

So What is this Marine Module?

Battlefront says it best on their web site, and press announcement:

“This, the first Module, adds a significant number of new formations, units, weapons, equipment and vehicles for both the US and Syrian sides, as well as brand new missions, maps and a campaign. General game engine improvements (such as TacAI changes, tweaking cover values and so on) are included as well, although they are also available to all Shock Force customers.  This ensures that everybody plays by the same rules and experiences the same basic gameplay.”

What does the Marine Add-on Contain?