After doing two articles on “The Future Of Warfare” for SimHQ, I decided to make it a trilogy with an area that was missing in the previous two articles. I’ve already covered Army, Navy and Air Force on a general level, but leaning more towards the Army in the first article. In the second I concentrated on unmanned aircraft, so you can say that covered Air Force more specifically. But for the third, I didn’t feel that there was enough on future Navy warfare to make an entire article out of it. I had covered what little was available on the subject in the first piece. So, I came up with the idea of looking at the future of law enforcement, or policing, to you and me.

Today’s police roles cover a whole lot more than just clipping a mouthy kid round the ear. The contemporary armed police have a high degree of training, skill and use the very latest weapons and technology, making them more like civilian soldiers and ranking them amongst some of the best in gunnery in the world. It is important to have these highly disciplined units available as there is an ever increasing number of gun and knife crime on our streets, but SWAT teams have many more roles than simply taking on gun-totin’ bad guys, with their roles being very similar to that of military special forces. It’s easy to forget that we have “war” daily on our doorsteps.

As a total opposite to how regular police officers are portrayed in U.S. crime series of the ’80s and ’90s, the incompetent, donut-eating sort, S.W.A.T. (Special Weapons And Tactics) is the elite special unit of American police departments, and is used to take on high-risk tasks that are beyond the call of duty to the normal patrol officer. This type of unit is used to carry out solely or assist with: high-risk arrest warrants, hostage rescue, counter-terrorism, and engaging heavily-armed criminals, as well as counter-espionage and even bomb-locating. Another unit of particular interest apart from S.W.A.T. is the FBI’s Hostage Rescue Team (HRT). Specialist units such as these can be found all over the world. 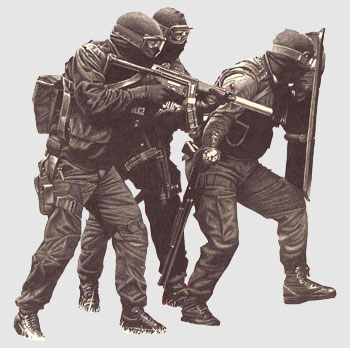 From now on, I’ll use the phrase “SWAT” team to describe any mentioned unit that is similar, even though, technically, SWAT is just the name of the Los Angeles Police Department (LAPD) unit and others based in urban areas.

At Wikipedia, it says:

“The first SWAT team was established in the Los Angeles Police Department in the 1960s. Since then, many American police departments, especially in major cities and at the federal and state-levels of government, have established their own elite units under various names; these units, despite their official name, are referred to collectively as SWAT units in colloquial usage.”

SWAT teams are usually equipped with specialized firearms and equipment. Weapons include assault rifles, sub-machine guns, shotguns and even high-powered rifles for use by snipers. Equipment can include, but is not limited to, riot control agents, stun grenades, entry tools, heavy body armor, night vision optics and even armored vehicles.

The Future of Warfare

The Future of Warfare – Part 3 Page 2

The Future of Warfare – Part 3 Page 3

The Future of Warfare – Part 3 Page 4

The Future of Warfare Page 2