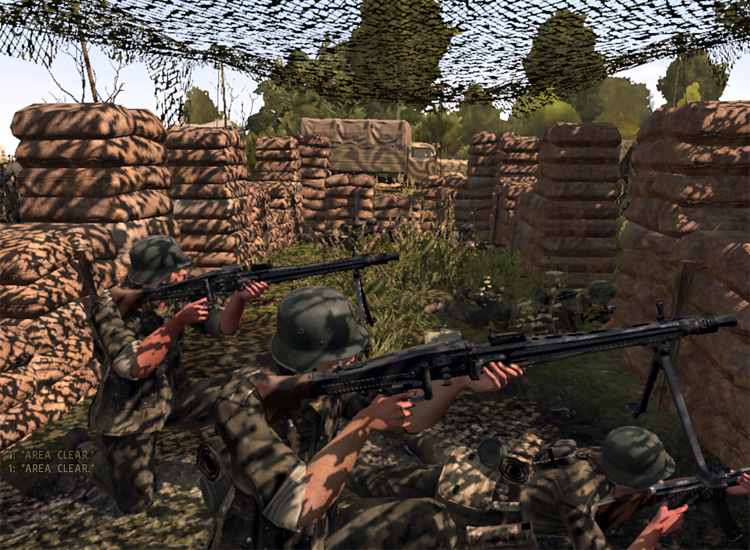 My software was purchased through GamersGate, and the digital download software was painless to download and install. A one click online activation by ProtectDISC was part of the installation. No details were provided regarding limits on activations.

Since SimHQ has covered Iron Front in considerable depth as part of thepreview article by “Magnum” and “guod”, this review will be a brief chronicle of my experiences with the title, both gameplay and performance. Something to be said at the outset is a reminder that Iron Front is based on the Arma 2 software engine. As such, any general complaints or issues you may have regarding Arma 2 are very likely somewhere under the hood in Iron Front. Lets get on to with it.

The single player offerings in Iron Front centers around it’s campaigns. There is one each for the German and Russian sides, each with an English language variant, for a total of four. I’ve been slowly working my way through these campaigns, and from what I’ve played they are nicely detailed. Voice acting is provided for the story cut scene elements, which have been generally well done aesthetically and functionally.

Speaking of patches, thus far the developers appear to have been focusing on including fixes for the various campaign bugs that have been reported. My Russian campaign had come to a point of being unplayable due to a bug, though it was happily fixed after installing the v1.02 patch (latest available at the time of this review).

Also included are a few single player scenario missions. Many will argue that single player is not the strong point of the Arma series in general, and that the same can be said of Iron Front. This is a matter of taste, however. And while the single player missions and campaigns in Iron Front may lack the sparkle of a AAA title with a dedicated single player focus, it does offer an enjoyable and carefully detailed experience with good variety. If there has been any weak point I could mention, it would be the well known AI issues of the Armaseries, such as terrible path finding and lack of decisive action. Hardly the fault of the Iron Front developers since it was inherited, and thus far only an occasional annoyance.

The multiplayer side of Iron Front offers far broader potential. Included with the package are a series of multiplayer missions in several formats. Most common is the “Blitzkrieg” mission type, which is a point control struggle between the Russian and German sides. These play well and let a player learn the ropes of different infantry classes and vehicles, though sometimes the control points seem to be too close together. There are also a handful of co-op style missions included.

The future of Iron Front is brightened considerably by the inclusion of the mission editor. Having spent a good deal of time with the Armaseries mission editors, I was right at home in Iron Front’s editor. All of the familiar scripting elements I’ve used in years past have worked as expected, allowing a rapid integration of the SimHQ template elements. I was building a collection of multiplayer co-op missions in no time. Those with single player interests can look forward to new third-party missions and campaigns.

Iron Front delivers a polished appearance, and demonstrates a uniformly fine attention to detail. This shows in the high resolution models and textures of the units, their animations, and the weapons they carry. Tanks and vehicles, both drivable and static such as radio trucks and heavy guns, are beautifully rendered. Some vehicles have specialized destruction modeling, which allows parts of the vehicles to break away as they take damage. Hitting a truck with an explosive will show fenders and other small parts being blown off and falling to the ground. Tanks will show these effects as well, sometimes armor plates will be blown away from the vehicle, leaving the damaged tank to carry on with the fight.

Furthermore, the armor modeling of tanks is particularly interesting. There is a simulation of round penetration of the armor, sometimes an incoming round will simply bounce off. Other times, it may knock loose some armor plates. The results of more serious impacts are not always predictable. Sometimes you’ll see just one or two crew inside the tank killed from a hit, leaving the tank still partially operational for the surviving crewmen. Given this variety in outcomes, scanning the battlefield for enemy tank threats is not as simple as just looking at whether the tank is on fire. I can’t say how accurate the armor modeling results may be, historically. But they do create a very interesting gameplay experience, something indeed beyond what I’ve experienced before in Arma. 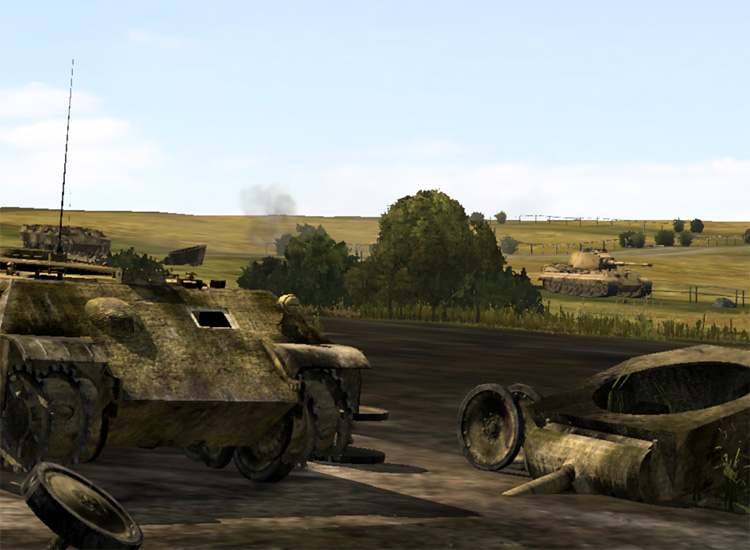 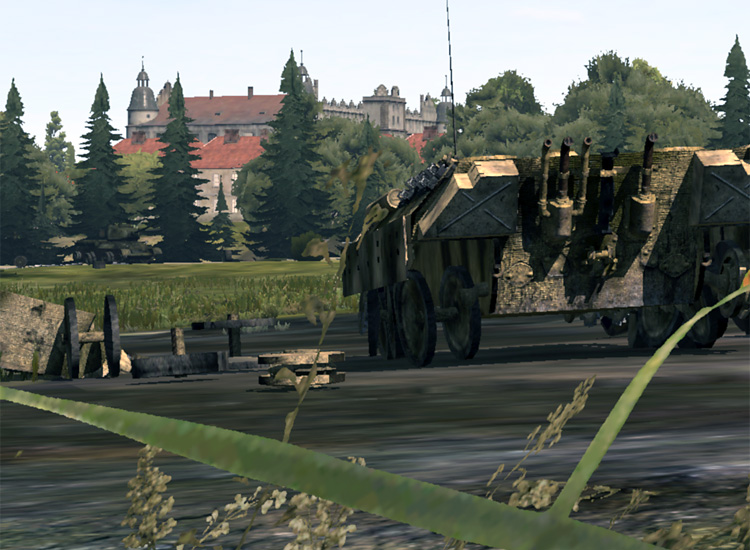 Tank gunner positions also feature adjustable optics and ranging scales, where appropriate. These vary from a rotating or sliding scale within the reticle, or a graphic representation visible just outside the main reticle view, and are adjusted using the “Page Up” and “Page Down” keys by default. At the time of this writing, there appears to be some problems with the accuracy of the range settings versus where the shot will land. Hopefully there will be resolution on this through patching.

Also included are some other elements beyond what Arma does stock. The ability to fold static guns into their mobile stance, and haul them behind vehicles. Requiring sappers rig up wiring between explosive charges and detonators, and allowing them to plant anti-personnel mines complete with trip wires. Modules that allow AI units to ride on the outside of tanks. Modeling of deadly fragmentary effects from hand grenades.