The purpose of this short guide is to give all players basic tactical information in reference to playing Battlefield 3. This is not a “set in stone” guide, nor is it some type of platoon SOP. It is just a little guide to get the most out of the game when playing with fellow SimHQ members, especially on our own Battlefield 3 game server. Also, not everything in this guide is the best way. I’m sure many of you have better ideas, and better tactics. That’s what our SimHQ Battlefield Series Forum is for — sharing those ideas.

There are four different types of roles in Battlefield 3, each one with strengths and weaknesses. The team that utilizes as much strength as possible is usually the winner. Sometimes it’s best to have one of each role in your “squad”. But sometimes, depending on the situation, it might be better to not have one each and have two of the other roles. For example, if your squad is conducting on foot infantry type tactics, then it might be best to have 2 riflemen, with there medic skills, and 2 support units with their ammo packs. This combo could dominate in a mostly land combat zone, on foot assault, or defense of an objective. By the same token, if your squad likes to take armored vehicles, like a MBT or an IFV, then it might be best to have 2 engineers, 1 rifleman, and 1 support role. The combinations could be endless, but the point is to use the roles to fit the situation and your squad’s desired fighting style. Plan ahead, as the game loads on what role your taking, and what other squad mates are taking. It’s best to appoint someone the overall squad leader, even though the game will reassign the position as others in your squad die. But one person assigned to the task the whole match will cut down on confusion.

Here are the four roles in Battlefield 3:

The assault class is a well rounded kit, and a good kit to start off with. You can heal teammates and later revive teammates, which is one of the most important tasks in game when winning is based on ticket count, which are lives lost. The weakness of this class is its poor anti-vehicle capability. So the key to this role is too keeping a fresh set of medic bags dropped, usually at capture points or set rally points. If you are playing this role and see a vehicle, light or heavy, your best bet is to identify it for your teammates, and hide from it till it passes. You will die trying to take them on alone. Weapon selection is pretty good with the assault class. You start with the M16A4 (US) or the AK-74M (RU). Most assault class weapons can unlock the M320 40mm grenade launcher. 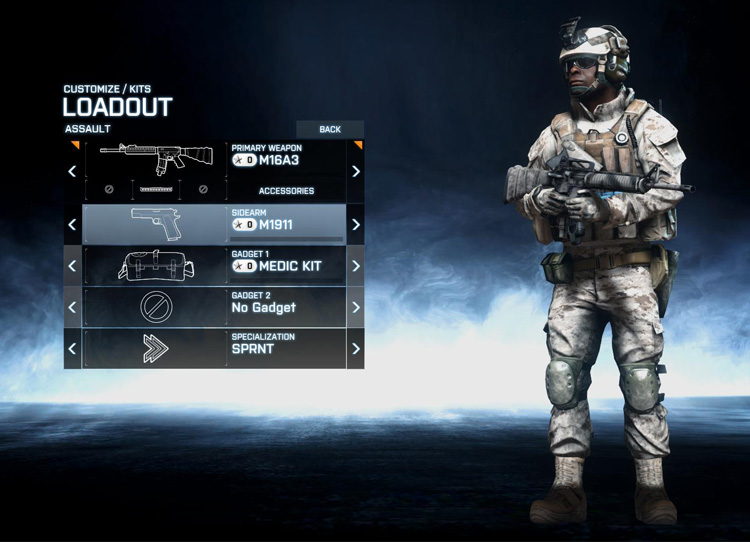 The engineer class is a vehicle killing machine, especially with the unlocking later in the character development, like the FIM-92 Stinger and the SA-18 IGLA shoulder-fired anti-aircraft missiles. You also start the class with a SMAW or an RPG-7V2 rocket launcher. This class is great for anti-vehicles and vehicle repairs, but it is limited against infantry, especially at range. If you’re taking a ground vehicle or a helicopter, one of your team should always be an engineer. When you start taking damage, back up into cover, or land somewhere safe, let the engineer jump out and repair the vehicle, then get back in and get back into the fight. Always have an engineer with you when using vehicles. ALWAYS. Protect your vehicles, disengage to repair, don’t just sit while under fire trying to repair. It rarely works. With the engineer you can also unlock land mines for vehicles. Sure, for a good easy kill you could just throw down a bunch of mines around a flag. But a smart enemy will suspect that and should have his co-ax gunner shooting them. The best place for a land mine is on the way up to an objective where the enemy thinks they’re safe. Especially if the vehicle has a specific way to get to an objective because of man-made or natural road blocks. Don’t die with landmines on your back. Lay them out. 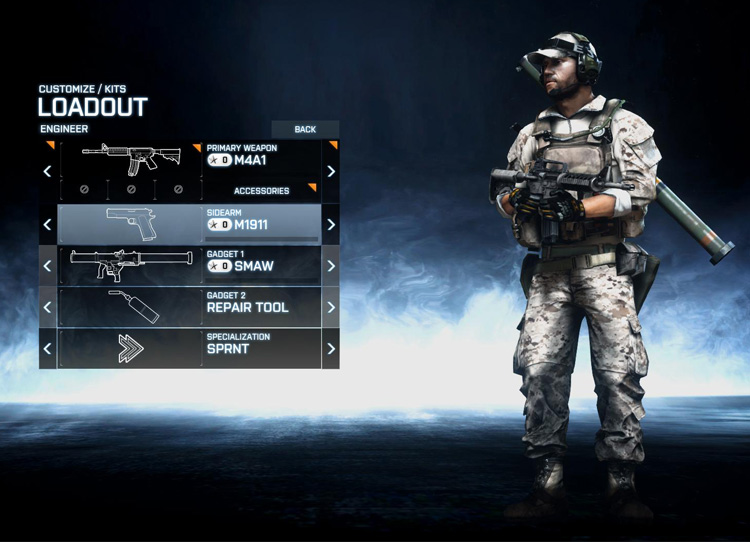 My favorite role because I can’t shoot straight, so I need a lot more ammo than most players. You start with the M27 IAR (US) or the PRK-74M (RU), but you can also quickly unlock the man slayer, the M249 SAW, and my personal favorite. You will also unlock the M18 Claymore mines, M224 mortars and other fun toys. The support role is good against infantry, and can resupply the squad and / or team, but is limited against armored vehicles. BF3 has a new suppression system which seems to work well on me, but I sometimes question if it works on my enemies. 🙂 So laying 3- to 5-second bursts on an enemy will make it hard for them to see, aim, and shoot. The key here is for the support guy to lay suppressive fire while a rifleman or a recon / sniper takes the kill shot. Defend objectives later with claymores and an overseeing field of fire. 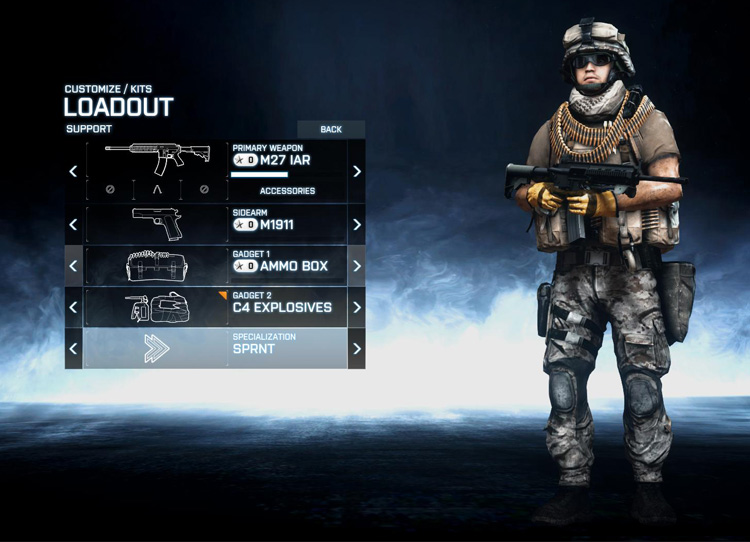 The recon class, (also known as the “hated camping snipers”.) But guess what folks — that’s what the hell they are supposed to do. But sure, a game can become unbalanced when half the team is a recon class. So keep it real, soldiers.

The recon strengths are of course the long range shot, but also being a great spotter. Anyone can spot targets (unless they’re on a hardcore server) but a sniper with his long ranged scope weapon can spot more and more often. And they should. Of course, the weakness of a recon role is slow-firing weapons and not very good in close quarters fighting. So get proficient with that secondary weapon you’re carrying.

I like to send a sniper off on their own (the only class I ever want to see alone, everyone else should be with the squad mates) and position them up high in a well hidden area. My favorite use for recon is to have them as only spotters. If they could spot and ID targets for the rest of the team, and cover the team’s backside to make sure no one is moving in behind them, then that is the MVP in my book. If they never need to fire their weapon, that is okay, as long as recon is communicating with the rest of the team on enemy positions, or areas of best approach. Get me a recon guy up high on a tower, out of view from everyone else and let them highlight targets for the team. Later in character development a recon guy will unlock a radio beacon, a motion sensor, and a laser marker. These are tools that make a recon specialist an even better recon specialist. 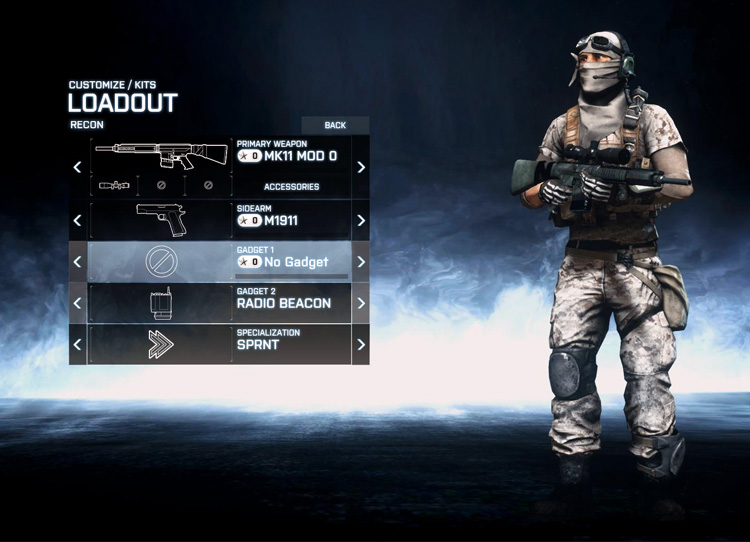