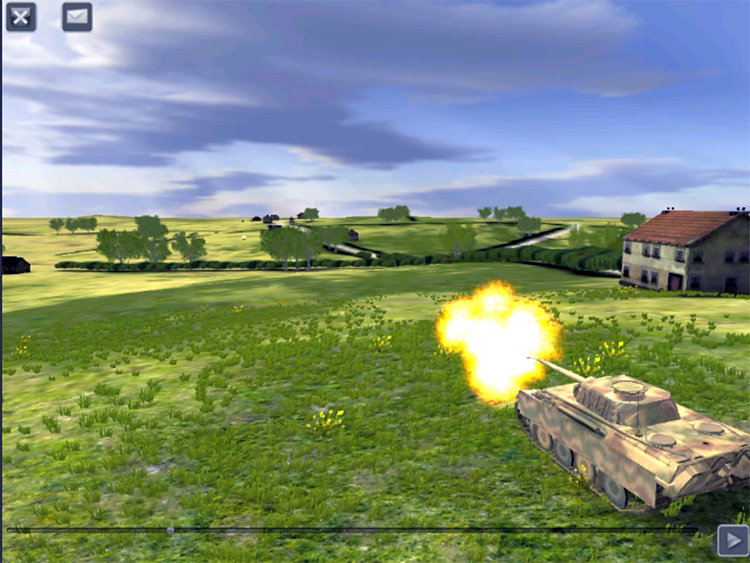 For the longest time, when I first started playing a few time waster games on my iPhone and iPad, I always thought how great it would be to get the Combat Mission first generation games on an iPad, and wondered if it would be possible.

Imagine my surprise April 1 when I first read about Combat Mission: Touch, from Battlefront.com coming to the iPad the next day. Like many, I actually did not believe it, since it was April Fool’s Day, and the fact that it was supposed to be released the next day. There was little warning or build-up hype. Sure enough, it was released. I paid my $4.99 to the Apple app store, and downloaded it. From the start, I was blown away by it. A very nice tutorial walkthrough, “Let me see your war finger… that’s not your war finger, let me see your real war finger!”. Funny, but a good tutorial and good gameplay. After a few hours, problems were noted and the newness wore off. It went from me being blown away to “like it”.

Combat Mission: Touch does not work on the first generation iPad. You need an iPad 2/3. In addition, you need good dexterity. Consider a stylus if you are prone to suffering from “fat finger” problems navigating the screen.

Included in Combat Mission: Touch are seven missions, able to be played from both sides. This gives you 14 missions to play. The missions are good, and well done. They are a little small in unit size, which is actually fine by me, because I have always preferred missions that are more manageable. Most of the missions in the Combat Mission: Battle for Normandy PC game, are quite large, too large most of the time. It may be because too many units could not fit on the iPad, but I think its better this way. They are Platoon-size missions, give, or take. 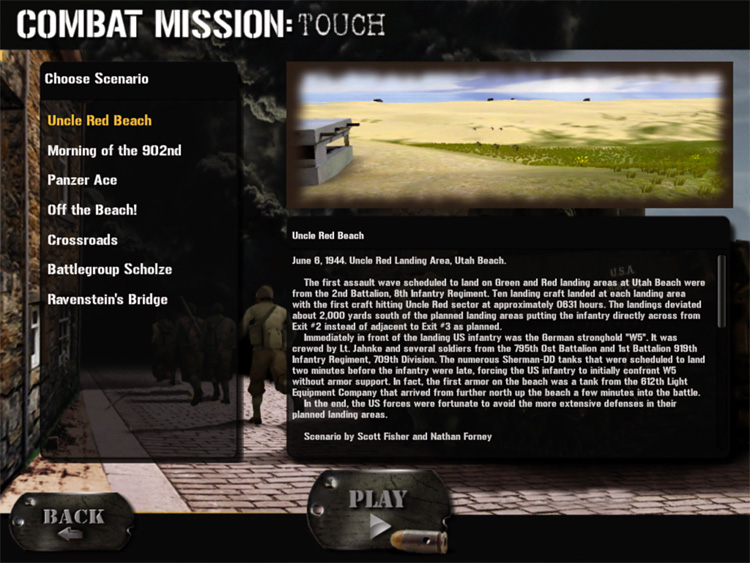 Units included are infantry, anti-tank, support vehicles, and a few tanks. There are not a lot of different units, but enough to carry out the mission and succeed in a basic real tactical manner. You also have scouts that have the ability to call in off-screen artillery fire.

The game play is the WEGO type. You give your orders to your troops, if playing multiplayer then your opponent is doing the same, and then there is a 30-second replay where you can just watch the action. Then repeat. It all plays out really well, a little basic, a little dumbed-down, but still a very good strategic and tactical combat game.

With the latest patch v1.1, you can now toggle icons during the replay, which you could not do in the original release. Previously, it was hard to follow your troops. You can also scroll the bar to view (or pause) a section of that replay.

Also, note that with the v1.1 patch your turn is automatically saved, and can be loaded to continue playing. That was something not allowed or included in the initial release. 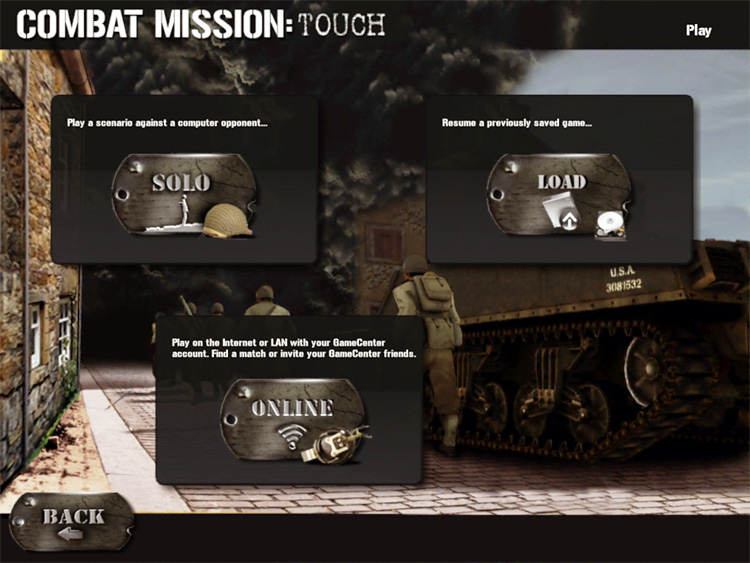 When released the multiplayer was spotty and one of the biggest complaints by the users. The recent v1.1 patch corrected those issues, and now multiplayer is much easier to get into and play, but still not perfect. Combat Mission: Touch uses the Apple iPadGame Center app that comes on all iPad’s. When you select multiplayer from the screen, Game Center opens up and that is where you can join a WEGO game with your friends, in your friend list, or random player. You can only play connected via WEGO. I would have preferred a built in PBEM (play by e-mail tool) to play my turn when convenient. Most of the time, when playing iPad games, it is while I am away or doing something else, and have limited time with it. 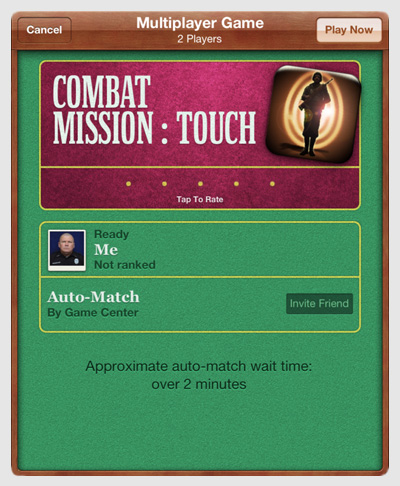 Combat Mission: Touch is a “must-have” game for any strategic or tactical game player who owns an iPad 2/3. It is truly a great game, cut down to offer just the right balance for mobile devices. The seven missions included are very good and well made. Each mission takes up to an hour to play, and now with the ability to save and load, you do not have to do that all in one sitting.

Combat Mission: Touch is understandably not as deep as its PC counterparts are, and not really meant to replace those great PC games, but for a trip or a long wait, Combat Mission: Touch fits perfect. There are some issues with the AI, which seems to be allowed to cheat. For example, fire at longer ranges; be able to turn on a dime when you flank them. 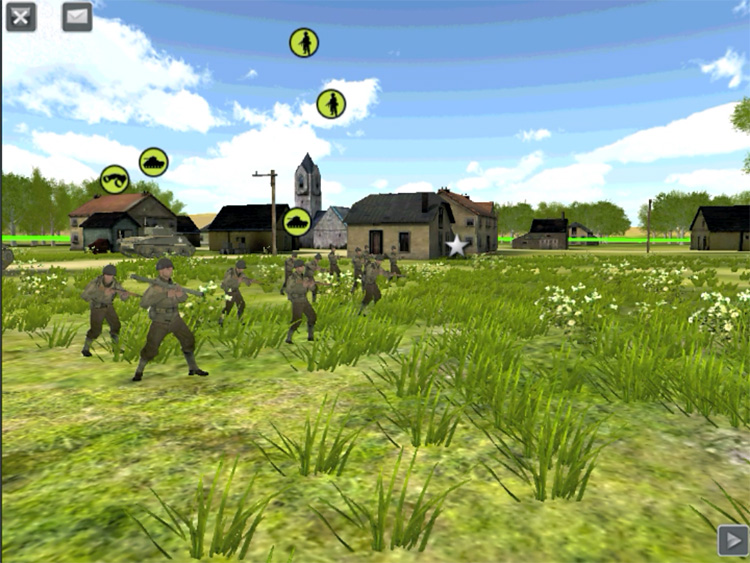 The replay tool is functional and great to watch. A bonus on Combat Mission: Touch is the ability to watch your full game on replay after you have completed it, like one big action movie. You can also e-mail that to a friend so they can watch the replay.

My concern is, though a good game, the combat is a little too basic. In addition, just seven missions — 14 if you count playing both sides — are weak. I have played them all, so I must say longevity in Combat Mission Touch is just not there. Perhaps Battlefront.com will release more missions (please!), but as is, Combat Mission Touch will get old quick. Still, it is worth playing, especially at the price of $6 USD.