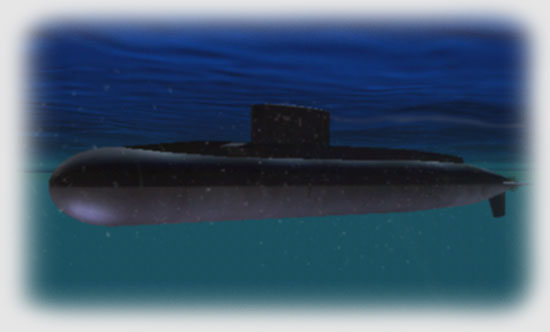 God bless Jamie Carlson and Sonalysts. Now is the winter of discontent for naval simulations modeling current-day conflict, and these guys are
about the only ray of sunshine I know of. Since the repeated demise of Harpoon 4, the surface navy in particular has been under-represented, and the bulk of other efforts center on World War II. Destroyer Command is an example. Modeling World War II destroyers, it is the last surface-sim of note to be recently released, and along with theSilent Hunter submarine series comprise the best of recent naval releases. A new Silent Hunter is currently in production. However, nearly all the simulations scheduled for release in the upcoming months center on combat prior to 1950. What about the present day? Sea power is more important in the modern world than ever before!

Enter Sonalysts Combat Simulations. Sonalysts fill a huge gap in naval simulation. Since the Harpoon 4 effort imploded, leaving only Advanced Gaming Systems’s excellent revival of Harpoon 3 and the earlier games in that series for modern naval simmers, Sonalysts stands alone in attacking the modern era and bringing gamers everywhere the chance to play Admiral in today’s world. Most of their work has been concentrated in submarine sims. This team has professional connections to the United States Navy, particularly in the area of acoustics and sonars, and their connections show in their work. Their previous efforts, 688(I) and Sub Command, are among the most realistic systems simulations ever to make it to the PC. Sonalysts even filled the gap for modern-day naval surface tactical gamers with Fleet Command, one of the most eminently editable and easy to master, fun to play naval games on the planet. Sonalysts seems to purposely cater to a niche market: the high-fidelity naval systems geek. Their diversity as a company enables them to do this, and such versatility is rare among entertainment software developers today. The equivalent would be Lockheed-Martin developing a sim of the F/A-22 for gamers (wouldn’t that be something?) or Dassault releasing a Mirage III simulation.

By the time you read these words, Sonalysts’ latest and greatest will either be on the market or getting darn close to release. It is the third in the 688(I) line of platform-command, high-fidelity systems management sims line, titled S.C.S. Dangerous Waters. Most in the press call it “DW” for short. But there’s nothing short about this one, readers. Let’s pop the hood and take a look, then you’ll get to see one of the new platforms in action.

I have a late press beta and should have the bugs I’m seeing squashed. As to the bugs, I hesitate to dwell on technical problems that the team is aware of. I did experience problems with FSAA and anisotropic filtering, using the NVIDIA v61.77 drivers, and some sound card issues with my Aureal AC97 sound emulator. Again, the team is working on these issues and should have them dealt with prior to release. Even in late beta form the game installs from one CD and does so quickly and without fuss. 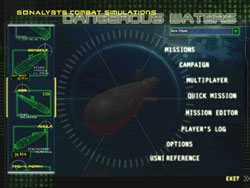 The menus are black-on-green and intended to evoke the look and feel of military data terminals. There are multiple scalable graphics options to fit most PCs out there, regardless of hardware. I don’t have the minimum specs in my documentation, but most simmers should have the basic hardware to get decent frame rates.

Full out, the game has moving, 3d water and cloud effects, and it’s really pretty. The only complaint I have is in the areas of the 3d modeling. This appears to be a little hit-and-miss, and though some of the models are the best I’ve seen outside Lock On’s ships, some are pretty primitive. Compare the British Type 42 destroyer, an AI platform, with the Iranian Sa’am (Alvand) class Vosper-Thornycroft Mk V frigate. The 42 is excellently detailed, reminiscent of the model used in Fleet Command. The Alvand isn’t. It too appears to be similar to the FCmodel, and lacking in detail.

The Iranian ships will be seen by a lot of people as OPFOR, and as such should have a little more detail. The controllable ships and submarines, which we’ll talk about next, are lovingly detailed, however.