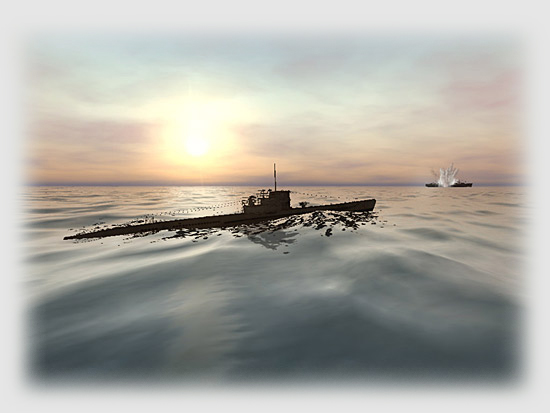 Q. On your web site 04.08.04 Live Chat you refer to a tutorial “The tutorial will resemble a Naval Academy course. It will include a “graduation mission” and it will influence the career starting “default” — get good grades and you may be assigned a better starting boat.” Will this be required for every new career? What other start options will be available to the player at the beginning of a career? i.e. start dates, U-boat types and flotillas.

A. The in-game save is a mixed blessing. On one hand, it offers the player the guarantee that is not necessary to replay through too much of the game to pass a difficult encounter. On the other hand, the save is a great spoiler of performance, stimulating a more careless gaming approach. We want to satisfy both sides. Therefore, the game will offer the possibility to save in-game almost any time (although with one specific condition like “no enemies nearby”). Anyway, the in-game save will be an optional setting related to the difficulty of the game. So the hard-core gamers that want to risk more may disable the in-game save or use the alternative of limited save slots per mission.

Q. The combat map (i.e. TDC map and the zoomed area of ocean 10 x 10 kilometers and below) in past U-boat / submarine simulations has shown everything within the area in real time as if it was being viewed via a satellite. Will Silent Hunter III break from this tradition and if so what can the player expect to see, or more importantly, not see at the various realism levels?

A. The map representation will operate based on the effectiveness of the sensors aboard the submarine. Depending on what sensor is used, the map will be updated at varying intervals and will include a variable degree of precision depending on the crew experience. Of course, this will be influenced by the realism setting to allow an easier approach for casual players.

Q. In past U-boat / submarine simulations a player has been instantly aware of any damage and the exact time it will take to repair even when it is the deck gun and the U-boat / submarine is at a depth of 100 meters. With regards to damage notification, will Silent Hunter III not show external until the player has surfaced and will the repair times possibly take more or less time than originally stated? At what time will the player know how long the repair will take?

A. The repair time of various damaged compartments and/or subsystems will be reported in vague terms — possibly in half hours and hours. Depending on the crew efficiency and skill, the estimation will be more or less precise. The external damage will not be reported while underwater.