When you first start Dangerous Waters you are greeted by an exciting movie showing the four playable platforms that really sets the mood before being taken to the main menu. The main menu allows access to the Missions, Campaign, Multiplayer, Quick Missions, Mission Editor, Players Log, Options and the USNI Reference.

Missions: The single player missions and your saved missions are available through here. Dangerous Waters ships with 25 missions.

Campaign: You have the choice to participate in the Russian Rebellion campaign from multiple perspectives. You can control forces from the U.S., the Russian Loyalists, the Russian Rebels or the Chinese, depending on the mission tasking and objectives.

Multiplayer: Up to thirty players can go head to head via Internet or a local network connection. You can create alliances and play against other alliances or the A.I. Multi-Station mode permits you and other players to man stations within the same platform and play as a team.

Quick Mission: The Quick Mission provides you the opportunity to create a dynamic mission based on a few basic parameters that you select. Select any controllable platform to command in the mission, a basic mission type, a level of difficulty and general world location and quickly create a dynamic mission. The type of mission depends on the platform you have chosen to command.

Mission Editor: The Mission Editor is a powerful tool for creating and editing missions. This is the same tool used by the developers to create all missions in S.C.S. Dangerous Waters.

Options: All the game, difficulty and graphic options.

USNI Reference: Has all the technical data including archive picture and the in-game 3D model for each platform. The in-game USNI Reference browser data is from the U.S. Naval Institute (USNI). 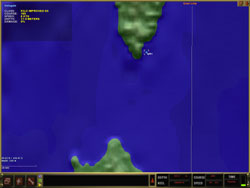 When the ‘show truth’ is turned off the 2D Navigational station only displays what you know about the world around you from the various collection points i.e. sonar, radar, Mark I eyeball etc. The completeness and the accuracy of this data is dependent upon many factors, such as from what station/s was the information collected, to how many times and how accurately over the period that it was collected. At times platform data will appear in your Navigation station from one of your allies via the data link. As with the data that you have collected, the data supplied by an ally via the data link could be simply a vague sound contact to precise data accurate enough for you to make a successful attack, or as with your data, it could be thousands of meters out with your attack only serving to give away your position. 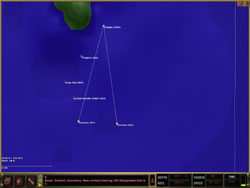 In the top right hand corner is the 3D display (if the option is not disabled). This will display the platform that is selected as a 3D object in a 3D environment. If the contact is unknown then, it will display a wire sphere, if it is an unknown surface contact it will display a wire ship through to an identified platform displaying the 3D model with a wire box corner showing its alliance. This window can be minimized, or swapped with the Navigational window making the main window the 3D display.

The 3D display is not a cheat. The 3D display simply displays a 3D representation of what is on the 2D map. If you have incorrectly calculated the distance or have misidentified the target in the 2D Navigation station, then the 3D display will not show you your error.