by Teddy Bär
“The only thing that ever really frightened me during the war was the U-Boat peril.”

As an island nation, Britain was highly dependent on sea-going trade. Britain required more than a million tonnes of imported food, material and all important fuel per week in order to be able to survive and fight on against Hitler’s Germany.

As a U-Boat Commander, you will join the fight to cut off the shipping that enables Britain to survive.

As in the First World War, “the war to end all wars”, the men of the Allied merchant navies faced the daunting task of supplying that sea-borne lifeline. Against almost overwhelming odds, not only from U-Boat attacks, but also from the perils of storm, surface raiders, air attacks and mines, they transported millions of tonnes of food, munitions, petroleum and troops across the oceans of the world.

Silent Hunter III puts you in command of a U-Boat, the Grey Wolf’ of the sea. You will partake in the longest battle of the war, The Battle of the Atlantic.

Will you be one of the lucky ones? Or will you join the other 30,000+ who did not survive the war? 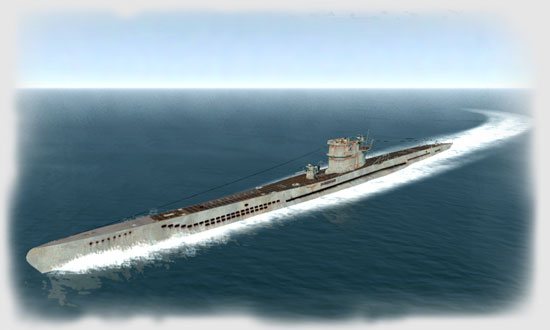 Ubisoft offers Silent Hunter III in a DVD and in an Electronic format downloadable from E-Retailers.

My retail copy of Silent Hunter III came in a DVD case, which included the single Silent Hunter III DVD (no CD-ROM version is available), a 60 page Manual, a Quick Reference card and a Kriegsmarine Grid Map all of which are on quality paper.

The 60 page manual is well written and easy to read. The manual does very well to cover all areas of the game and there is more included than I had expected for the 60 pages. It covers enough for you to jump right in and start playing.

However, the Manual could have been expanded on or explained in greater detail. For example:

” What happens when crewing the engine room at the different levels of ‘minimum’, ‘normal’ or ‘high’? I certainly do not gain any additional speed nor can I travel further. The crew do not appear to tire any slower.

” When I have max’d out the ‘Efficiency Metre’ bar for the lookouts and there is an empty space will I miss a contact because I left the slot empty? The manual also does not tell you that if there is no Officer on watch you will not be notified of ships spotted, a problem made worse by the incomplete Crew Management.

The manual omits some essential basic information, such as, the flags for each nation represented along with the dates in which that nation is either, neutral, friend or foe.

Price points and percentage margins are no reason for incomplete manuals that leave the player having to second-guess the game elements and/or the Dev Teams intentions. Silent Hunter III is a game begging for a more comprehensive manual, even if it was in an electronic form and is a natural for a supplemental paper manual similar to what Dangerous Waters offers.

The high quality quick reference card has the keyboard layout on one side. On the other side is the default key commands and an image of the Command Room, Attack Periscope & Damage / Crew screen with labels.

The Kriegsmarine Grid Map which measures 39 x 32 centimetres also includes information on convoy and shipping routes, allied air coverage for each period, allied convoy periods and Axis naval base’s dates. As the quadrants are not numbered, I did find myself reverting to my old Aces of the Deep Grid Map.

Unfortunately, I was not able to attain the Ship Recognition Manual that was offered in very limited numbers (1000+) to the European community. Why such a great value-adding product was not included from the start at an additional cost is a mystery. Perhaps we can look forward to a “second-printing” in the future.