To Portsmouth and Back – Notes of a Traveler in Dangerous Waters 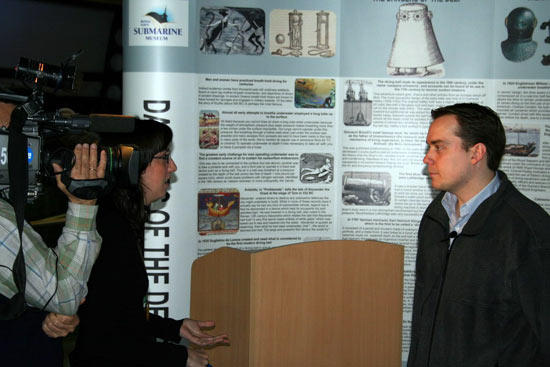 Black Bean Games held the launch of the much anticipated European version of Sonalysts Combat Simulations Dangerous Waters at none other than the Royal Navy Submarine Museum in Gosport / Portsmouth, England. Present were representatives of the Spanish and Italian Press, Stewart Braybrook from Strategy First, the Webmaster (Olivier Marchetta) of a French naval simulation web site, Jamie Carlson, Producer of Dangerous Waters and of course, yours truly for SimHQ.

But before passing the gates of the Royal Navy Submarine Museum (RNSM) I first had to cross the distance between Hamburg, Germany and Portsmouth, Great Britain. Thank God for air travel.

Since only two days would pass before I would be back home, I decided to travel light, which meant less trouble on the way to and back from the airport, both in Great Britain and Germany. Unlike other attendants of the event (most notably Jamie). With only 1 hour time difference, jet lag wasn’t a problem for me. That proved to be fortunate because my travel adventures didn’t end at the Airport.

While the guys from Black Bean Games (most notably Livio and David) have been very helpful and accommodating in terms of travel and housing, last minute issues unfortunately prevented them from taking care of all the details of my travel arrangements. Which in the end meant, that after I arrived in Gatwick (where I have never been before) I had the task to first find the right ticket booth and the right tickets and then actually catch the right train… on time. Lucky me, everything worked out — and I ended up in the right train (and even the right part of it — apparently they split up the train and leave behind a part on certain lines) which in the end brought me to Portsmouth!

Finally in Portsmouth, all that was left was to find the hotel, which according to my directions should be close to the train station or in other words: “Go out, turn left, walk 800m and then you will see it.” Sure Sherlock… it was a touch more difficult than that, but being trained in Navigation in charted and uncharted waters I finally found the right hotel and they even had a room reserved for me. After I had settled into the room I started thinking about how the heck do I find something to eat now (it was around 9 PM)? Barely had I given the idea any thought when Livio buzzed me on the phone and invited me to a local restaurant where all the attendees of the event would be having a late dinner together.

On the way down to the foyer and the cab, I stumbled into a French fellow who turned out to be the Webmaster of the Mille-Sabord web site (Olivier) who was also making his way over to the restaurant. Now joined by a fellow player, we moved out to gather a cab and on towards the unknown, or should I say Gunwharf Quays. After not that much searching, we found the restaurant and were introduced to the majority of other people who would attend the presentation the next day. Among them CDR Jeff Tall and Jamie Carlson.

The restaurant had a wonderful atmosphere and the food was great, really tasty and spicy! Never having been on a product launch, Black Bean Games again had exceeded my expectations and this trend continued for the entire launch.

After the dinner it was back to the hotel and into the waiting arms of some much needed sleep.

The next day most of the cast for this days festivities joined up after breakfast and caught a cab to the ferry which would take us to Gosport. The ferry ride would be less than ten minutes as opposed to driving around the harbour, which would be 45 minutes plus (depending on traffic). 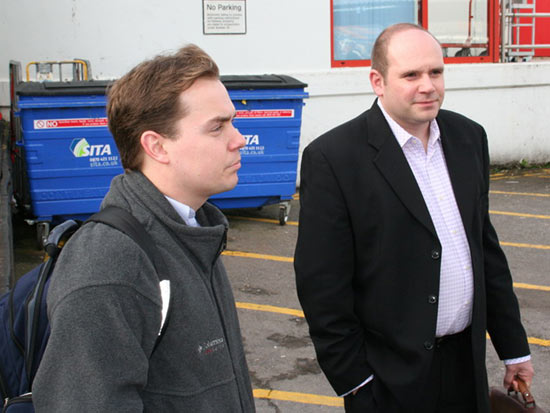 Close to the Ferry (on the Portsmouth side) – Jamie Carlson and Stewart Braybrook. 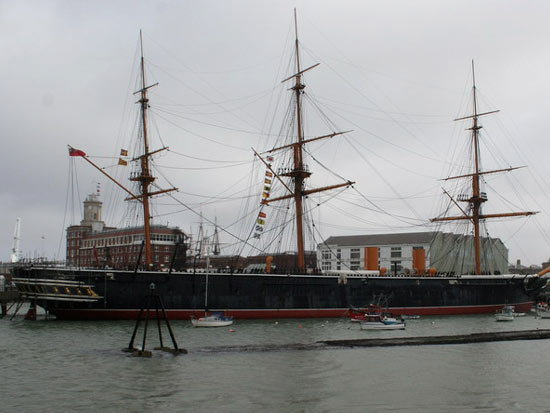 HMS Warrior seen from the ferry.

After getting off the ferry, we walked to the Royal Navy Submarine Museum (RNSM) which was only about 500m as the bird flies, but turned out to be 10 minutes as the traveler walks. This little stroll around the harbour allowed me to chat some with Jamie and the other guys. While we were walking along merrily, Olivier suddenly asked if anybody would know how to repair a digital camera — a task nobody was suited for, so his DigiCam found a resting place in one of the garbage bins along the way.