Generally, I’m a ground pounding, fast jet kind of person, but I’m often swooned by the crazy capabilities of the helicopter world. The same things that attract me to the stealthy hunter-killer tactics of helicopter sims can also be found in naval sims. There is a certain chess-like quality to playing naval sims; slower paced, more methodical, but no less exciting for sure. In this installment of our “Read It – Do It” series we’ll take a look at a great book by Rear Admiral Richard H. O’Kane who penned the story of his patrols as executive officer (XO) aboard the famed World War II Gato class submarine Wahoo. To supplement your reading you can relive the adventure with Silent Hunter 4: Wolves of the Pacific.

O’Kane’s book offers us a unique glimpse into the world of the “silent service” during his five wartime patrols in the Pacific aboard Wahoo.The year was mid-1942 when Wahoo, one of the newest boats in the submarine fleet, was ordered to Pearl Harbor to start its warfare against the Japanese. Just seven months had passed since the devastating surprise attack on Pearl Harbor and O’Kane recalls their arrival:

“A section of hands who had not seen Pearl Harbor since the attack were at quarters as we entered the channel. Facing each ship, or her remains, as we passed by would make their blood boil, and I doubted there would be a dry eye. The very sight would exhort them to do their level best in our coming endeavors.”  – page 23 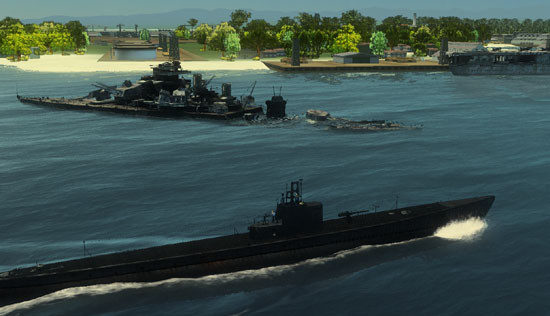 For the first two patrols the Wahoo is skippered by Lt. Commander Marvin Kennedy and O’Kane makes it clear that the conservative tactics and lack of aggressiveness hurt the chances of success during those periods. Indeed, on the first patrol Wahoo had the good fortune of spying an aircraft carrier (believed at the time to be the Ryūjō):

“At 0645, I sighted a large ship, still slightly hull-down and presenting a 40-degree starboard angle on the bow (presenting a little more than half a ship’s length). That put her at 12,000 yards and on a course north. Her deck was flat; we had an aircraft carrier in our grasp, and the Bells of St. Mary’s bonged as they never had before.”  – page 57

When the Captain slowed Wahoo to assess the situation for himself, the opportunity to strike passed and Wahoo was unable to again regain contact with the enemy carrier.