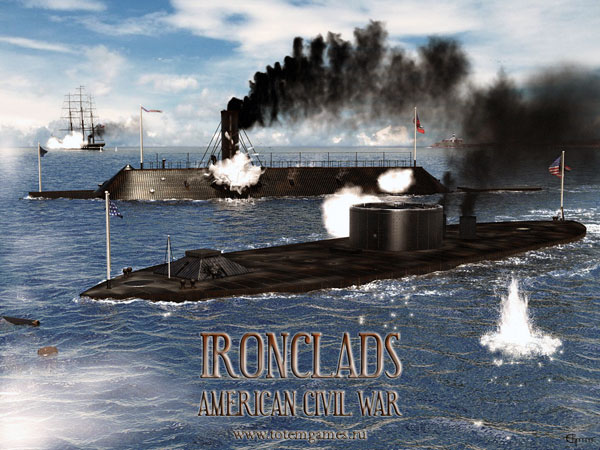 Leading into this naval game review, every reader should be aware of the American Civil War Battle of Hampton Roads, or commonly referred to as “The Battle of the Ironclads”.

The game of Ironclads: American Civil War, developed by developer Totem Games will take you back to that time in our U.S. history. I must say they did do it justice. Now this is not the only battle contained in the game, but this is the first one played in both campaigns. Here is a background on that battle referenced from the web site Shotgun’s Home of the American Civil War:

“Naval history was made on March 8, 1862, when the first Confederate ironclad steamed down the Elizabeth River into Hampton Roads to attack the wooden sided U.S. blockading fleet anchored there. Built on the hull of the U.S.S. Merrimac (which had been scuttled and burned when the Federals abandoned the Gosport Navy Yard in April, 1861), the new warship had been christened C.S.S. Virginia, but in common usage retained its original name. After ramming and sinking the twenty-four-gun wooden hulled steam-sailing sloop Cumberland, the Merrimac headed for the fifty-gun frigate Congress. An awestruck Union officer watched the one-sided fight as the Merrimac fired “shot and shell into her with terrific effect, while the shot from the Congress glanced from her iron-plated sloping sides, without doing any apparent injury”.

The results of the first day’s fighting at Hampton Roads proved the superiority of iron over wood, but on the next day iron was pitted against iron as the U.S.S. Monitor arrived on the scene. It was just in time to challenge the Merrimac, which was returning to finish off the U.S. blockading squadron. The Confederate ironclad carried more guns than the Union Monitor, but it was slow, clumsy, and prone to engine trouble. The Union prototype, as designed by John Ericsson, was the faster and more maneuverable ironclad, but it lacked the Rebel vessel’s brutish size and power. The Merrimac’s officers had heard rumors about a Union ironclad, yet, according to Lieutenant Wood: “She could not possibly have made her appearance at a more inopportune time for us. Lieutenant S. Dana Greene, an officer aboard the Monitor, described the first exchange of gunfire: “The turrets and other parts of the ship were heavily struck, but the shots did not penetrate; the tower was intact, and it continued to revolve. A look of confidence passed over the men’s faces, and we believed the Merrimac would not repeat the work she had accomplished the day before.” Neither ironclad seriously damaged the other in their one day of fighting, March 9, 1862 though the Merrimac was indeed prevented from attacking any more of the Union’s wooden ships. A new age of naval warfare had dawned.”

There are many web sites where everyone can read up on, not only this battle, but all of the naval battles that occurred during this dark time in U.S. history. Another excellent source of information is Ironclads and Blockade Runners. Both sites will give you outstanding insight towards the battles for which the game is loosely based upon.